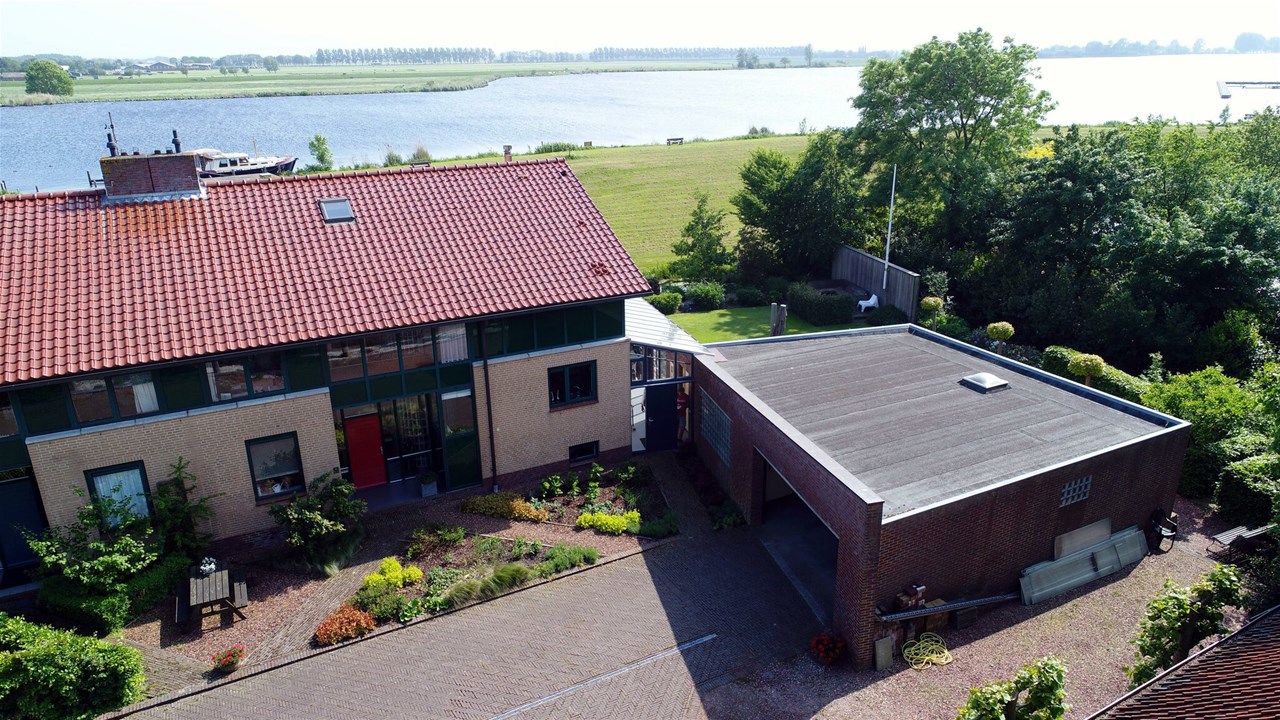 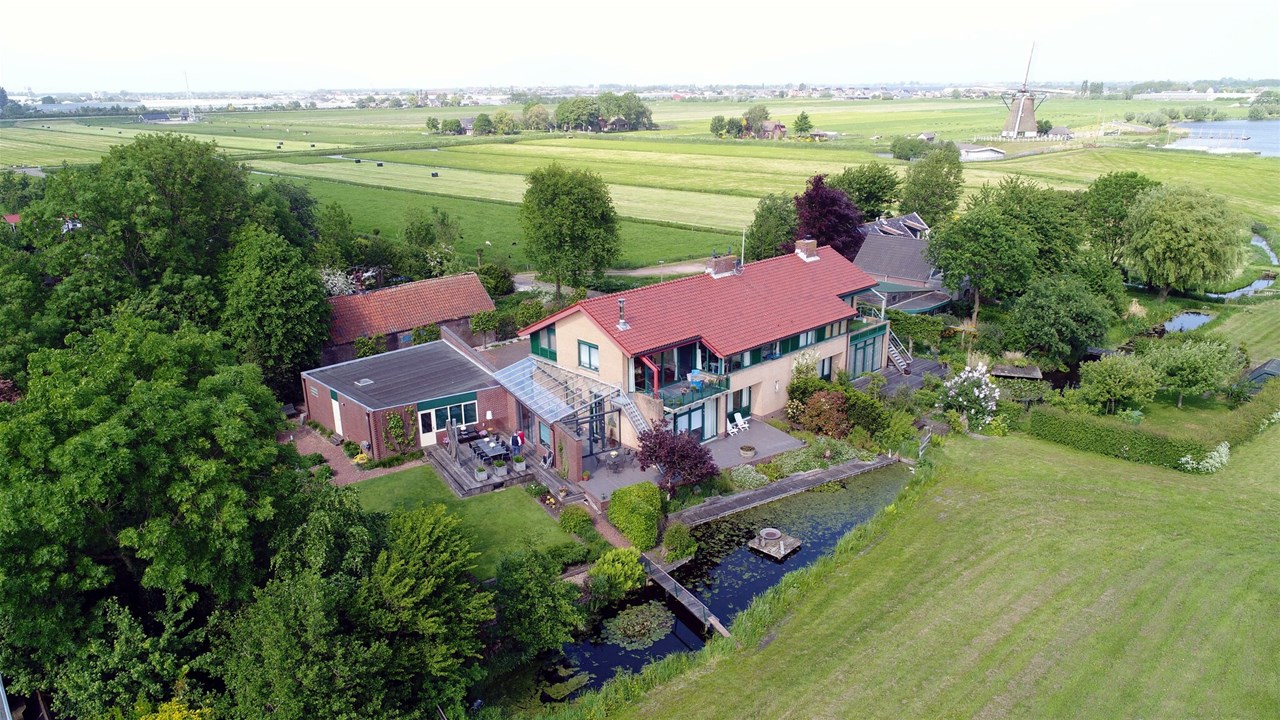 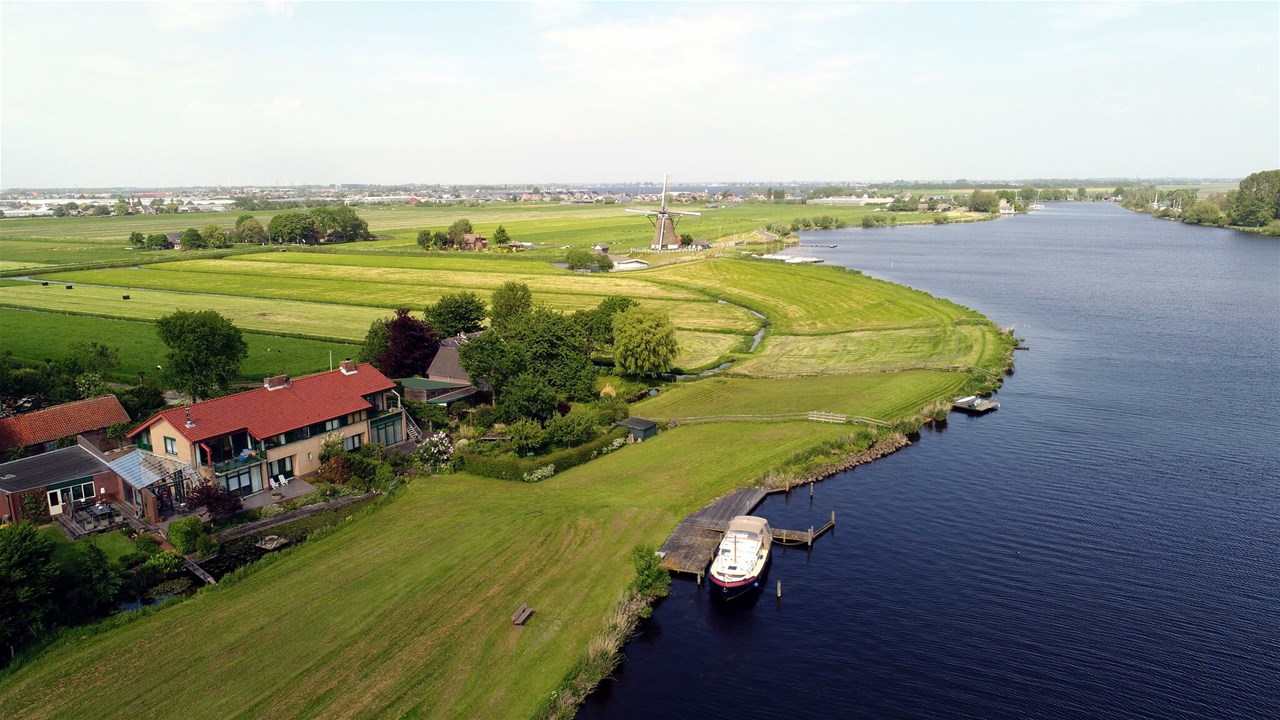 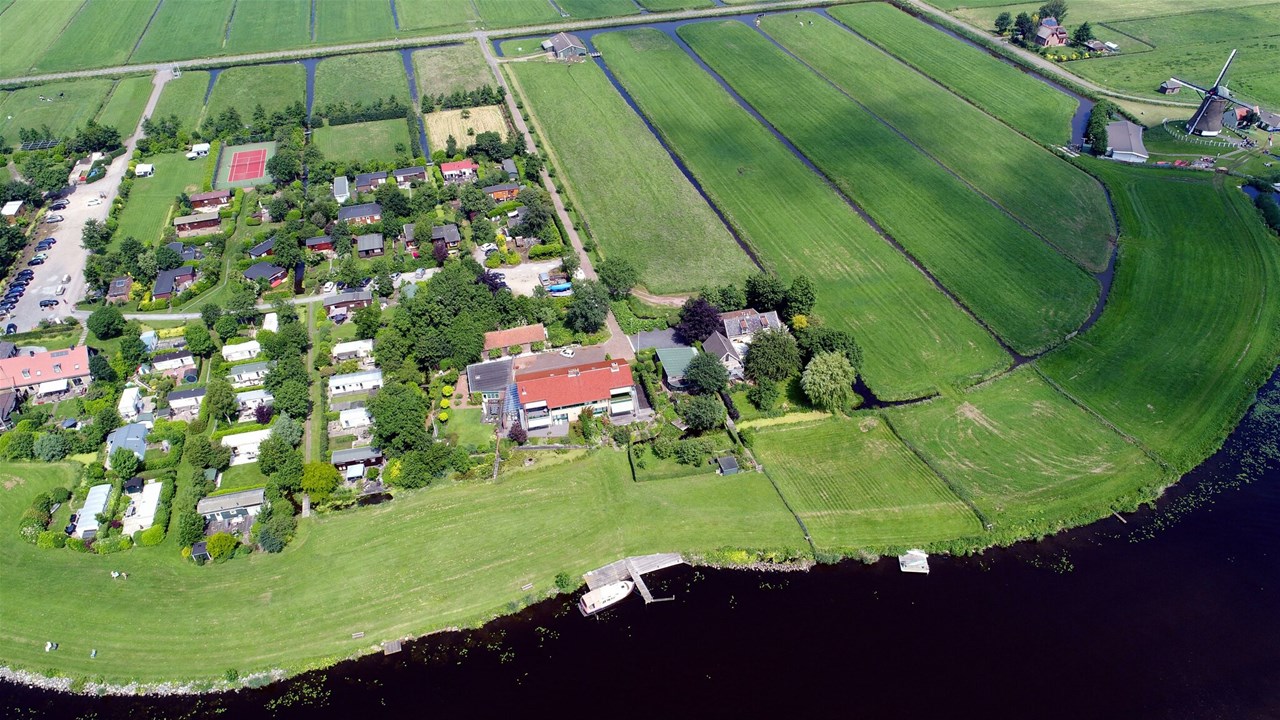 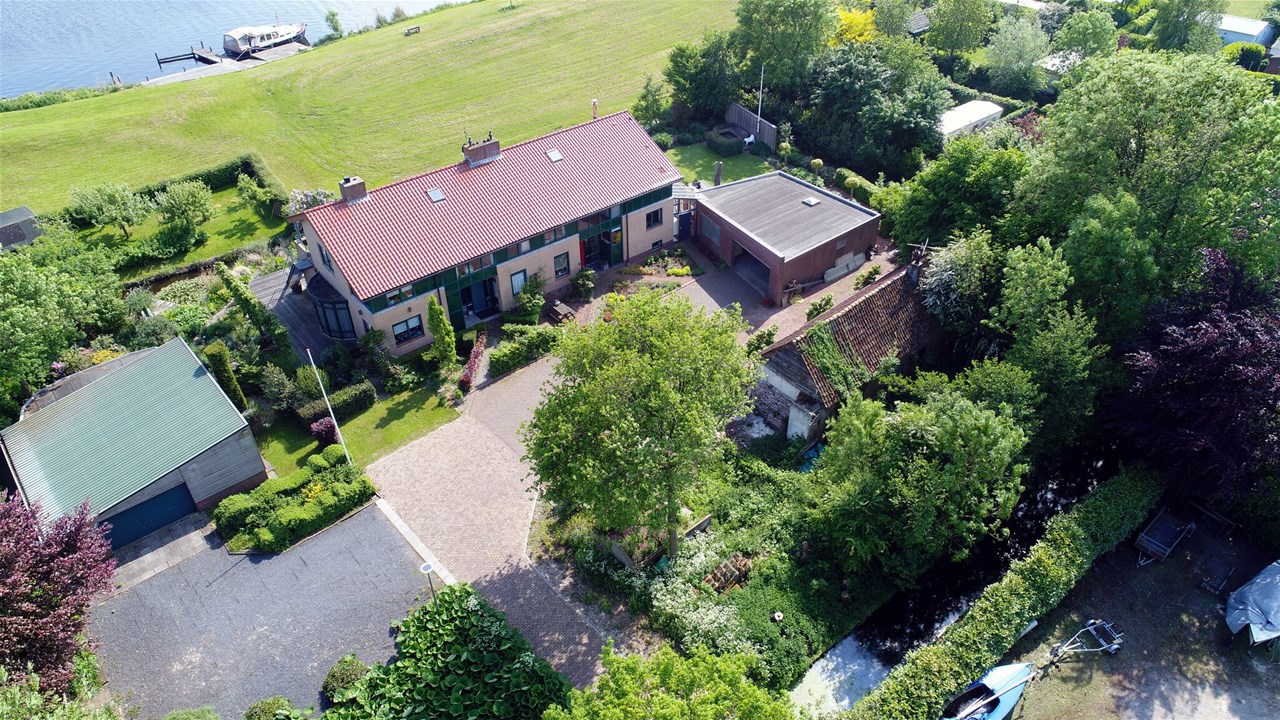 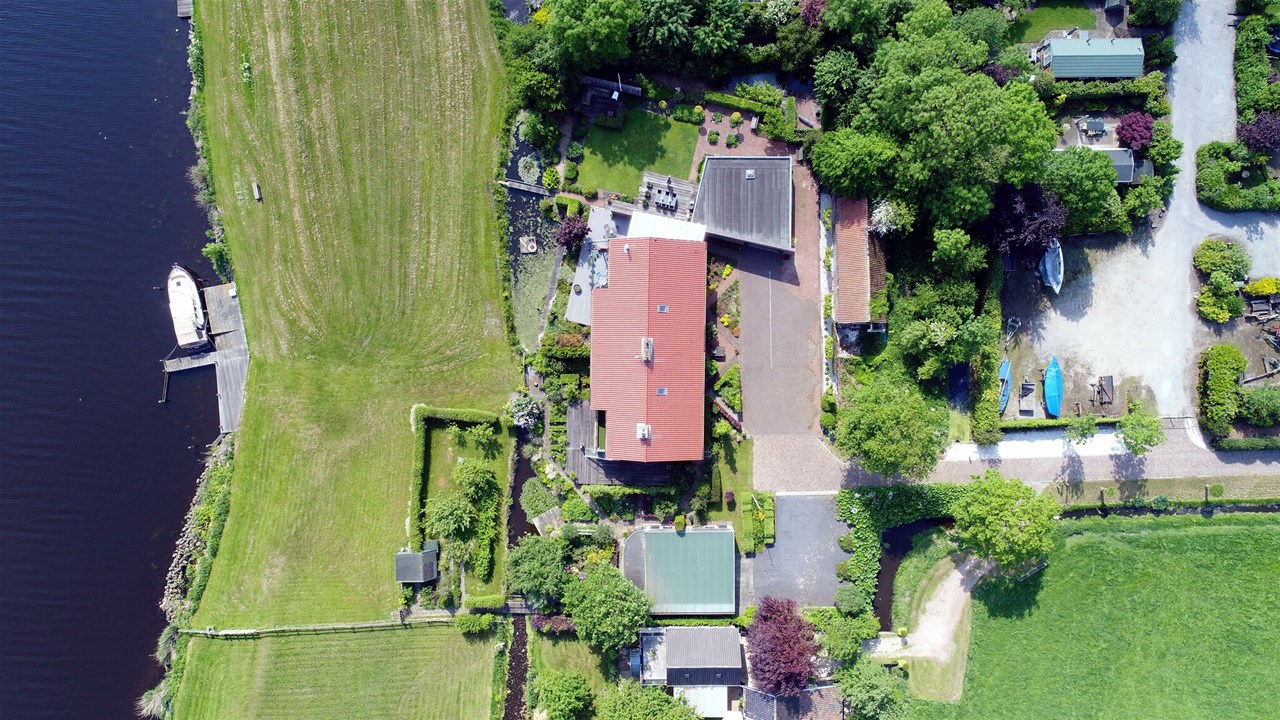 Lovely rural living in a wetland area. That is possible in this very spacious, architect-designed and furnished semi-detached house on the water of "the Wijde Aa". This house, with no less than five bedrooms and two bathrooms, has a double garage, a conservatory and a spacious garden with a terrace on the water. And your boat is safely docked on a wide jetty.

This extraordinary villa is situated in a unique location in the outlying area, in the vicinity of recreation park 'De Wijde Aa'.
The house can be accessed via a long driveway. The spacious square at the front offers ample parking space. There is also a double garage.

Ground floor:
On the ground floor is the hall with spiral staircase and wardrobe. Furthermore, a large bedroom with private bathroom and walk-in closet. Downstairs you will also find the utility room with a kitchen unit and connections for washing and drying.
The staircase leads you to the kitchen and the two living rooms at split-level.

The kitchen is equipped with every luxury and comfort and overlooks the grass fields at the rear. The living room at ground-floor level has French doors to the terrace; the slightly higher second living area has a spacious balcony of 16m² and overlooks the Wijde Aa.
From the kitchen, you enter the conservatory with glass roof construction and underfloor heating. The conservatory has sliding doors to the beautifully landscaped south-facing garden, and also offers access to the shed and the garage.

1st Floor:
On the first floor you will find a spacious landing with fixed closets. Furthermore, there are four bedrooms, the second bathroom with walk-in shower and toilet. The large attic is accessible via a folding ladder.

Garage:
Spacious garage with electric door and storage closets. Next to it is the large shed with windows and a door to the garden.
The cellar is currently being used as a fitness room and infrared sauna.

Garden:
The garden surrounds nearly the entire house and stands out due to the rich planting and large lawns. The sunny terrace faces south.

Jetty:
Several (private) boats can be moored at the hardwood jetty. The ramp is handy, with which launching a small boat becomes a piece of cake. The recreational water is a part of the Braassemermeer.
In short: this is a very unique, rural house with lots of space in an peaceful oasis.

This soil and scaffolding are separately available at the house for € 95.000, - kk
Read full description

Roelofarendsveen is a village in the municipality of Kaag en Braassem in South Holland. Not long after the villages of Rijpwetering, Oude Wetering and Nieuwe Wetering received their names, in 1342, the village of Roelofarendsveen originated. The village is often called ‘the tulip of the Randstad’. This is because the village is responsible for 25% of the tulips produced in the Netherlands. As a result of these large production numbers, the village organises an annual flower parade. A real eye-catcher in Roelofarendsveen is the water tower, which, with its 31 metres in height, can be seen from afar. The tower has recently undergone a metamorphosis, and currently functions as a shop, an exhibition space and a house.