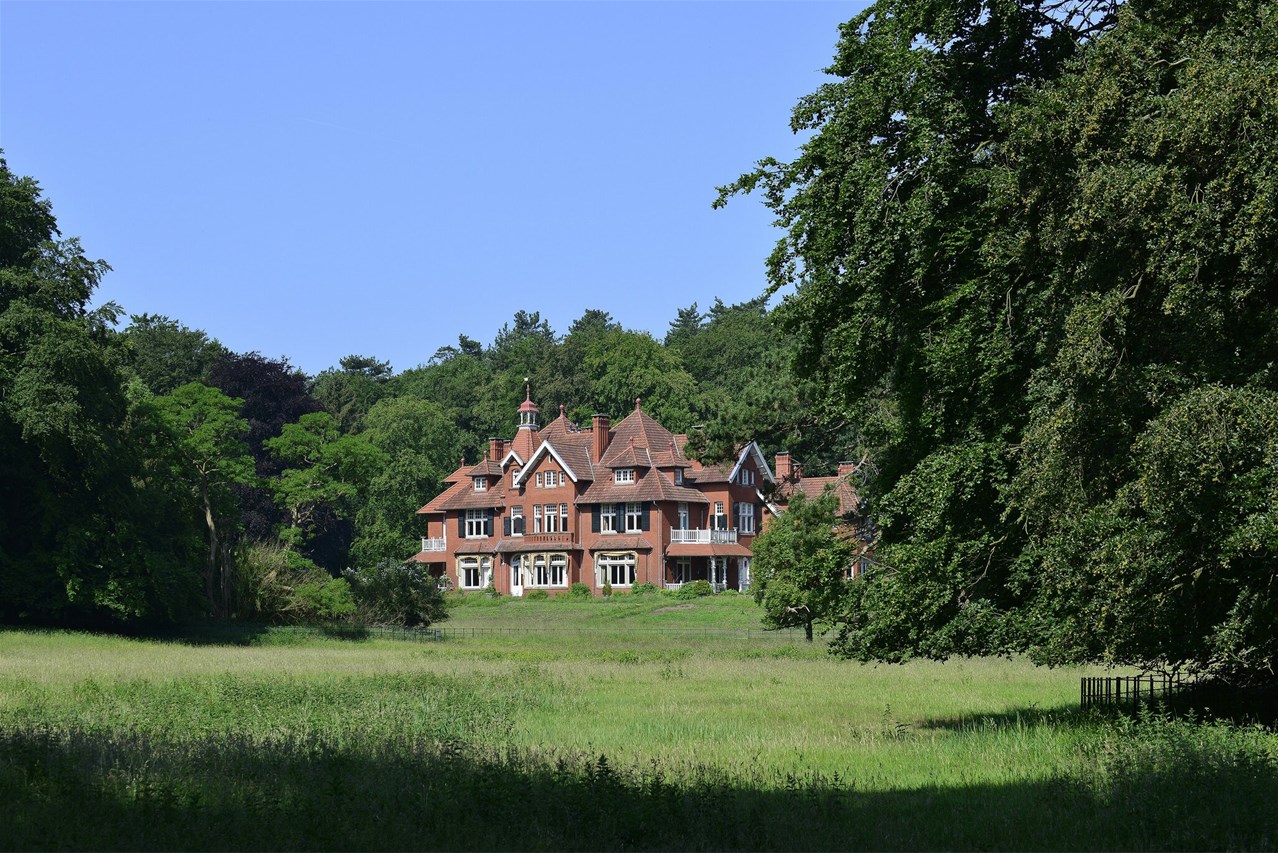 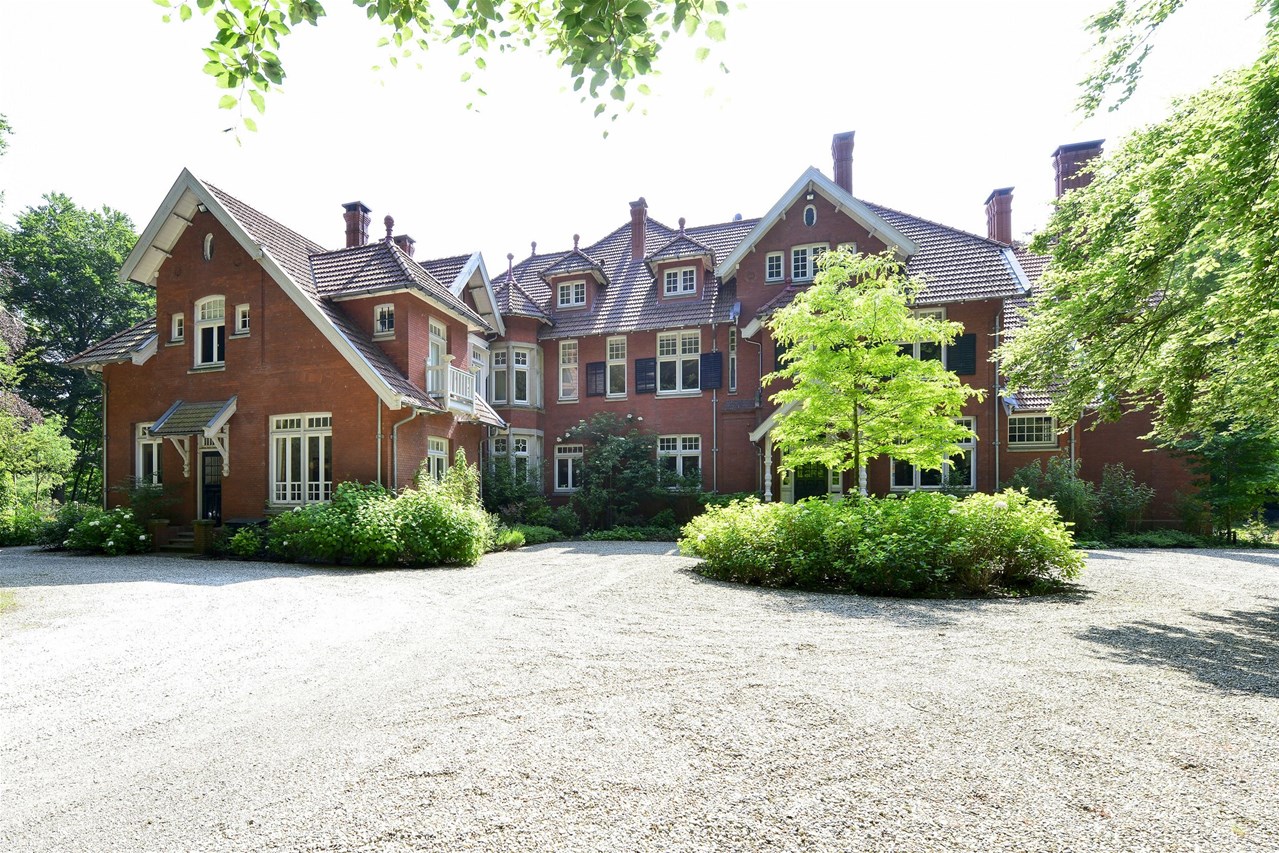 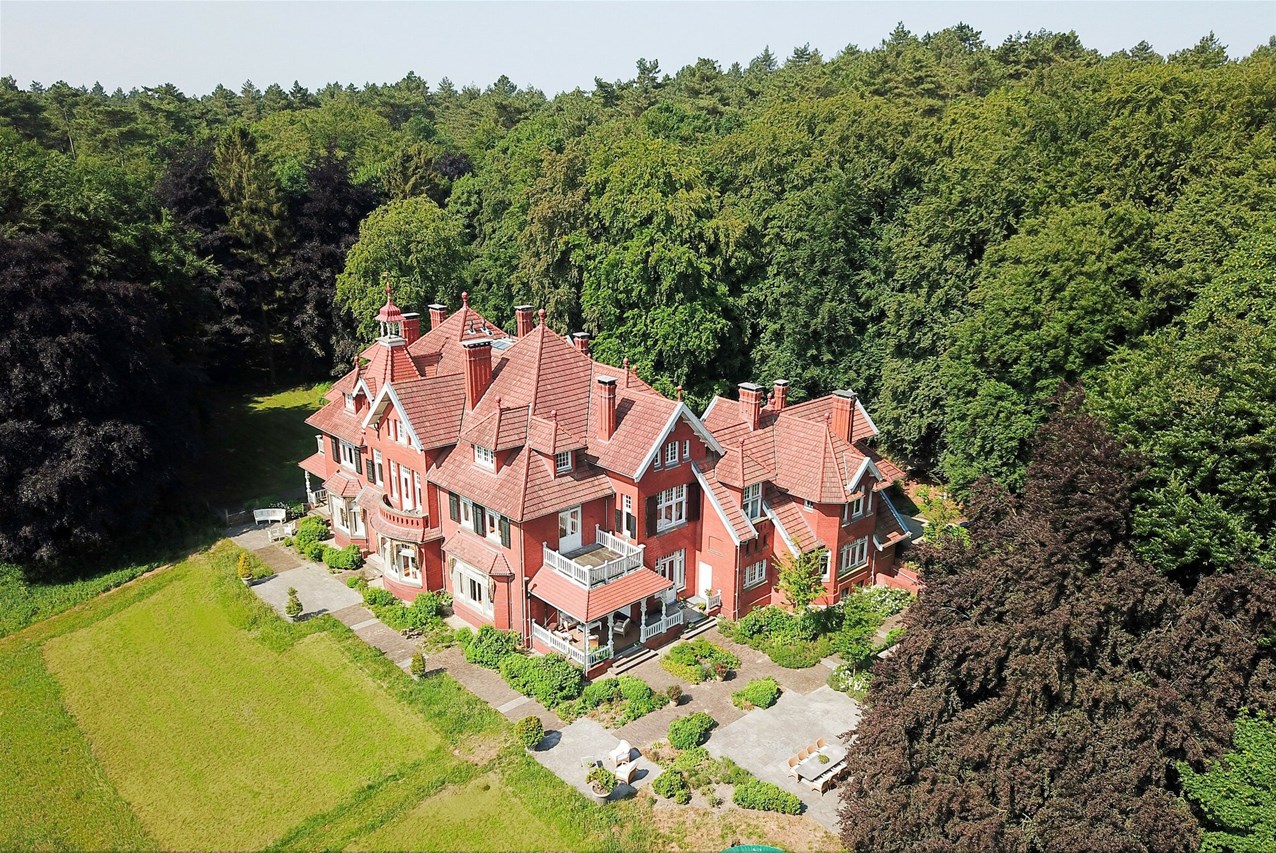 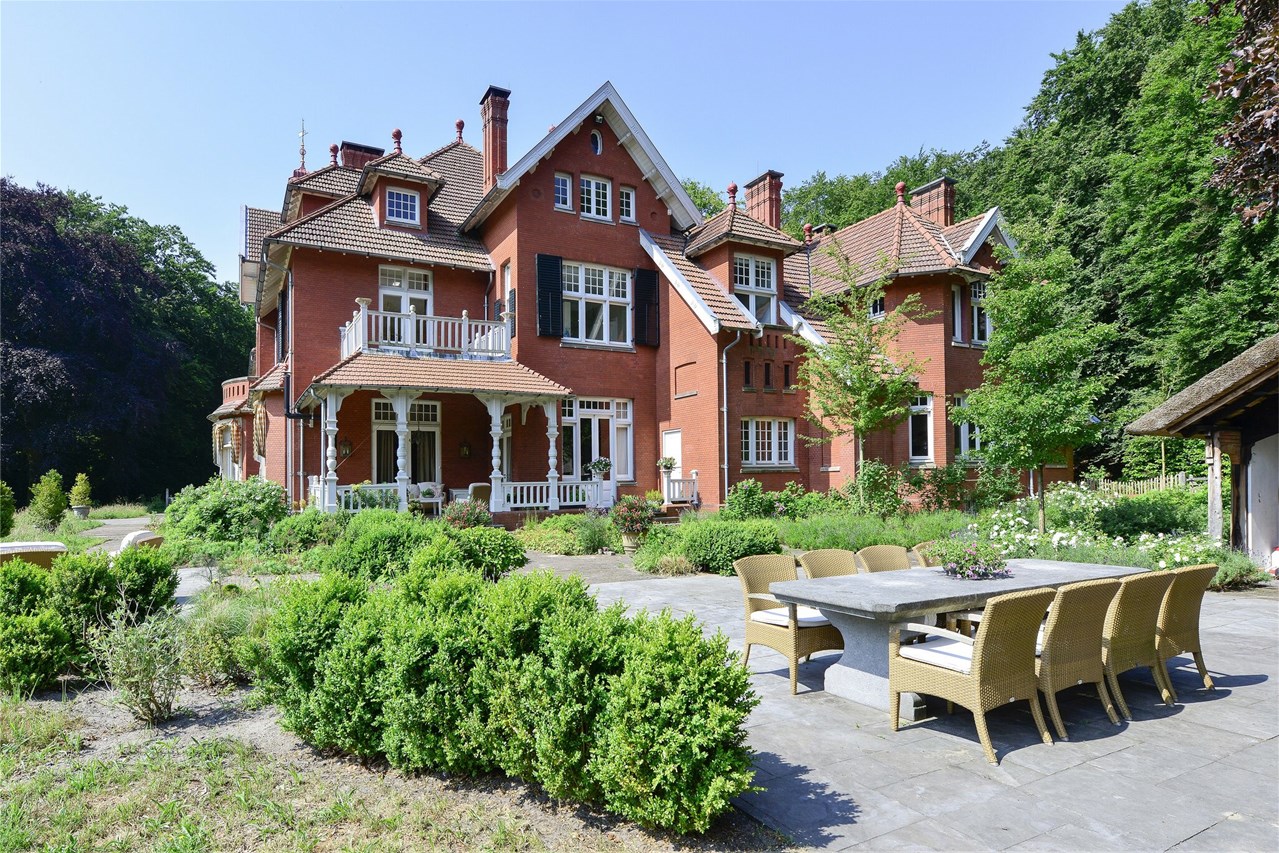 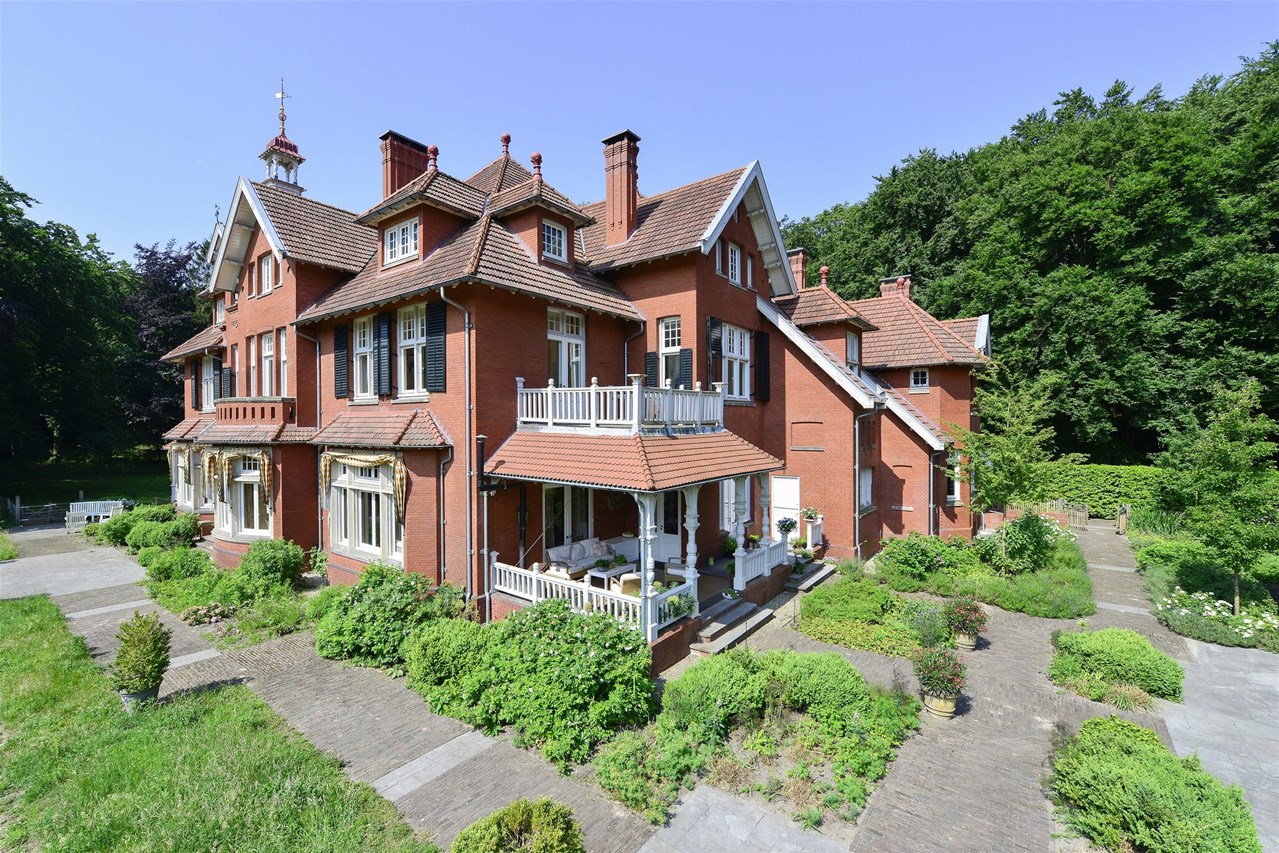 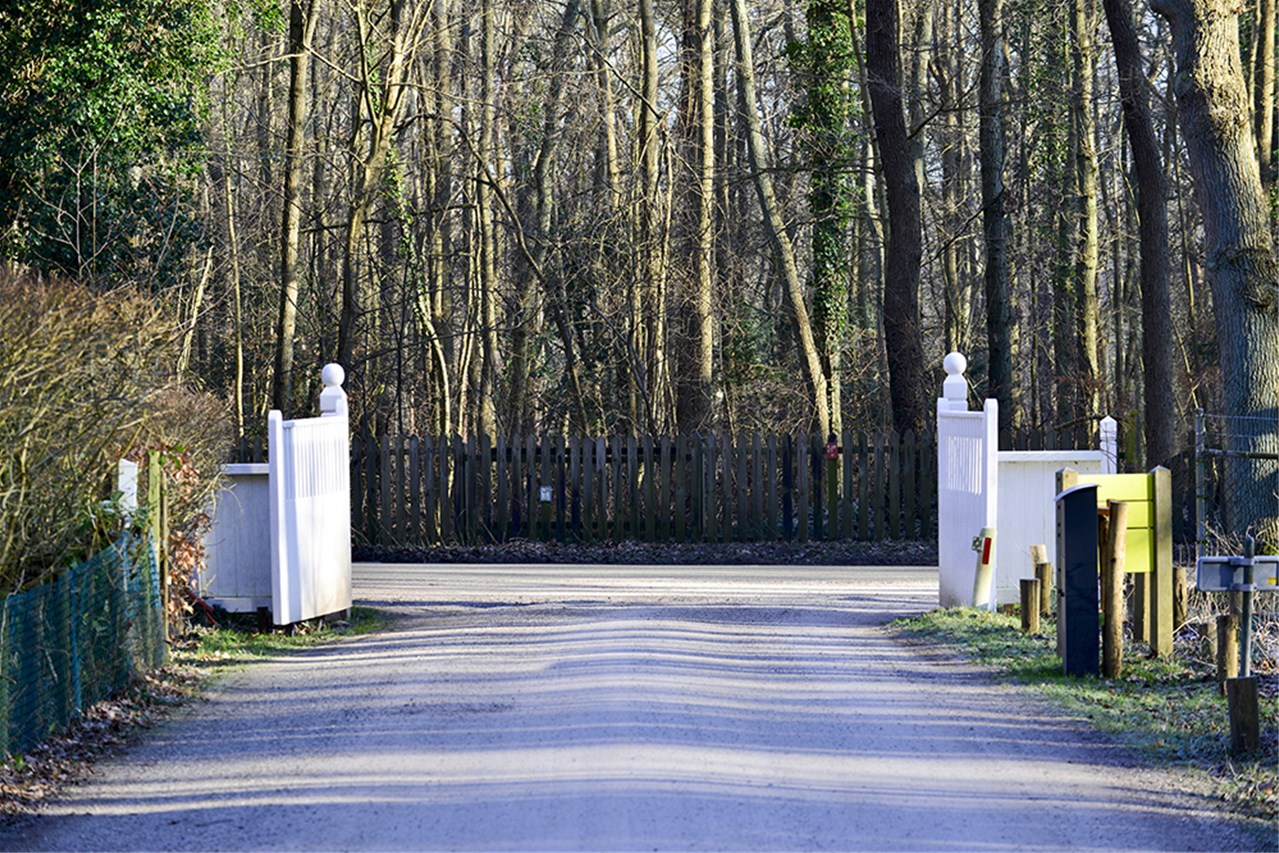 Estate with Royal Grandeur
The exquisite Koningshof country estate is situated in Zuid-Kennemerland National Park, renowned for its ancient sand dunes. With its brightness and warmth, this unique, impeccably renovated family home is a joy to live in for all generations.

A picturesque village situated in the municipality of Bloemendaal, Overveen (near the town of Haarlem) straddles the rolling dunes of the Zuid-Kennemerland National Park. This rustic and picture-perfect part of the Netherlands is dotted with sand drifts, heathland, creeks and salt mashes, and winding lanes snaking through untamed woodland. You are only a few kilometres away from the sea and always surrounded by its mild, invigorating scent. Watch and listen to the waves lapping against the shoreline in what is doubtless one of the country’s most stunning and fascinating areas. Tucked away amid the trees and parks, you will find beautifully designed villas and stately country estates, often revealing no more to passersby than their majestic-looking gates. These houses were built in carefully selected locations, preferably as near to the sand dunes as possible, and continue to charm to this day with their splendour and gran¬deur. These houses were once the residences of wealthy aristocratic families, who discovered the joys of country living in the eighteenth and nine¬teenth centuries and would leave their townhouses in the city behind for long spells on the coast during the summer season.

Many of these mansions have since been repur¬posed and serve as the head offices of companies or as conference centres, while others are owned by charities or are the property of the Dutch Society for the Preservation of Nature. Other mansions are in the hands of passionate private individuals who acquired the estate and use it as a family home or to house their business. While living on an estate is something many people dream about, very few actually get to experience it in reality. The prospect of the major refurbishment these homes generally require in order to restore their former warmth and comfort can be daunting. Luckily, the beautifully restored Koningshof Estate has been very fortunate in every way.

English country-house style
The Koningshof estate was built between 1898 and 1900 at the behest of the Amsterdam-based banker Johannes Luden and his wife, Mathilde van der Vliet. Mathilde was a member of the Borski family of bankers, who were among the wealthiest and most prominent families in the Netherlands at the time. During that time, they owned the expansive sand dune area between Haarlem and the North Sea coast, which they used as a hunting ground. The family and their children divided their time between the Elswout, Duinlust and Belvedère country estates.

Koningshof was designed by the architect Abraham Salm in an informal interpretation of the English country-house style, a balanced and eclectic mix of architectural styles. Rather than rigid and symmetrical, the designs here are intricate, playful and welcoming. The house features staggered and expanded facades in red brick featuring bay windows, loggias and balconies, an intricate tiled roof with dormers, narrow, striking-looking chimneys and a delightful tower that offered a panoramic view over the landscape (this extends into the Elswout estate, which faces Koningshof). The garden, with stretches as far as the eye can see, was designed in the English country-house style by the landscape architect L.A. Springer, who also designed the park belonging to the adjacent Duin en Kruidberg estate and sections of the park of Paleis Soestdijk, a former palace of the Dutch Royal Family.


Old glory
While Koningshof is currently (2018) surrounded by woodland, in the early twentieth century it was situated on top of a sand dune in the open landscape. The estate, which sits on a tract of land of more than 200 hectares, was always inhabited by the Luden family, until the family’s last descendant decided to pass it on to the Dutch Society for the Preservation of Nature (Stichting Natuurmonumenten). The mansion and the adjacent building, which used to serve as the carriage house, and the large landscaped garden (more than 6,200 sq. m.) were subsequently let to the Dutch Film Museum (Nederlands Filmmuseum) until around 2003. The remaining parts of the estate were subsequently opened to the public.

After the relocation of the Dutch Film Museum, the Koningshof estate remained vacant for some time, until it was acquired by the current owners. Although the estate, which has National Monument status, disintegrated during the extended period of vacancy, it eventually ended up in good hands. Over a two-and-a-half-year period, the mansion was lavishly renovated, with Salm’s authentic design serving as a blueprint. Substantial investments were made to restore the estate to its old glory and to enrich it with modern facilities to ensure a high level of comfort and luxury. The mansion – which had in the meantime been converted into offices – was dismantled so as to revive the grand old family residence.


Warm and intimate
Featuring a French lift, hot and cold running water, a bathroom with a bathtub, and two kitchens, the estate offered a high standard of luxury by the standards of the time. The layout was carefully designed, just as everything in the house was designed with a specific intention. Domestic staff and residents were strictly separated, with each having their own staircases, hallways and servants’ quarters under the collar beams. The estate features around 1,350 square metres of living space, divided across three floors.

While doubtless very spacious by any standard, the house has a warm and intimate feel to it because the individual rooms have agreeable, manageable sizes. The covered entrance at the rear (north side) of the estate provides access to the entrance hall, which leads to the grand hall (featuring an open fire and open staircase, situated just right to the centre of the mansion. The living areas are located at the front of the mansion. There is the dining room, with its open fire and large, east-facing porch, the living room with its semicircular bay windows facing the south, the television room (which used to serve as the ‘gentlemen’s room’) and the study, which has an open fire and faces the southeast. There is also a large cloakroom at the rear of the estate, providing access to what used to be the servants’ room and a staff entrance giving onto the large open-plan kitchen with its elegant mantelpiece and the former servants’ quarters.

All woodwork, panelling, wooden mantelpieces and hardwood floors, decorated stucco ceilings and staircases are fully renovated and have been updated where necessary. The original ambience was restored in each room while staying true to the English style of the home – honouring the spirit of Abraham Salm’s design. The original, French-manufactured lift has been fully restored. When we asked the owner to list the various renovations carried out over the years, his response was: “It’s better to ask what hasn’t been renovated!” For the first two-and-a-half years, the house was inhabited solely by various types of tradesmen. It took tens of thousands of special roof tiles and stone ornaments to restore the visible decay which had set in over the decades. As part of the remodelling process, the house was fully rewired, boasting miles of new piping, electrical installations and water heaters. With its home auto-mation system, computer-operated heating technology, heat pumps and other amenities, the house is ready for occupancy and requires minimal maintenance. It has clearly been renovated with passion and a keen eye for detail.

Splendid location
There are eight bedrooms on the first floor. The master suite with its fireplace and en-suite dressing room and bathroom features a beautifully designed square balcony at the side of the house, which faces the east. There are four other bedrooms with fireplaces (three of which also feature a balcony) and several stylish bathrooms. The attic (approx. 335 square metres), which was occupied by the servants during the Luden era, still has several bedrooms and a bathroom – which has been converted into a charming game room for children with a bar, home movie theatre and ping pong table. The spacious basement is equipped with a swimming pool and a wellness and fitness room.

This is how one of the most beautiful estates on the Dutch North Sea coast was saved from decay and dilapidation. The current owners have made every effort to restore Koningshof to its former glory and preserve it for the future. The grand mansion is situated in a superb location in the bustling Randstad conurbation and will extend a warm welcome to the new residents. Can you imagine what it would be like to live here and, as the new owner, be part of the illustrious history of this charming country estate?

Overveen is a town in North Holland, in the municipality of Bloemendaal. Overveen lies on the eastern fringe of the North Sea dunes. The dunes and the beach are very close, and very inviting. It’s a great place to have a nice workout and relax. Overveen has a warm, authentic 1930s appearance. There are many young families, whose children play (outside) and go to school together. The atmosphere is friendly and social. The people who live there often come from the city (Amsterdam), looking for more space, nature and a safe, pleasant environment to let their children grow up. Nearby facilities include excellent schools, train stations Haarlem and Overveen, medical care, shops, childcare, hockey clubs, football, tennis, etc.