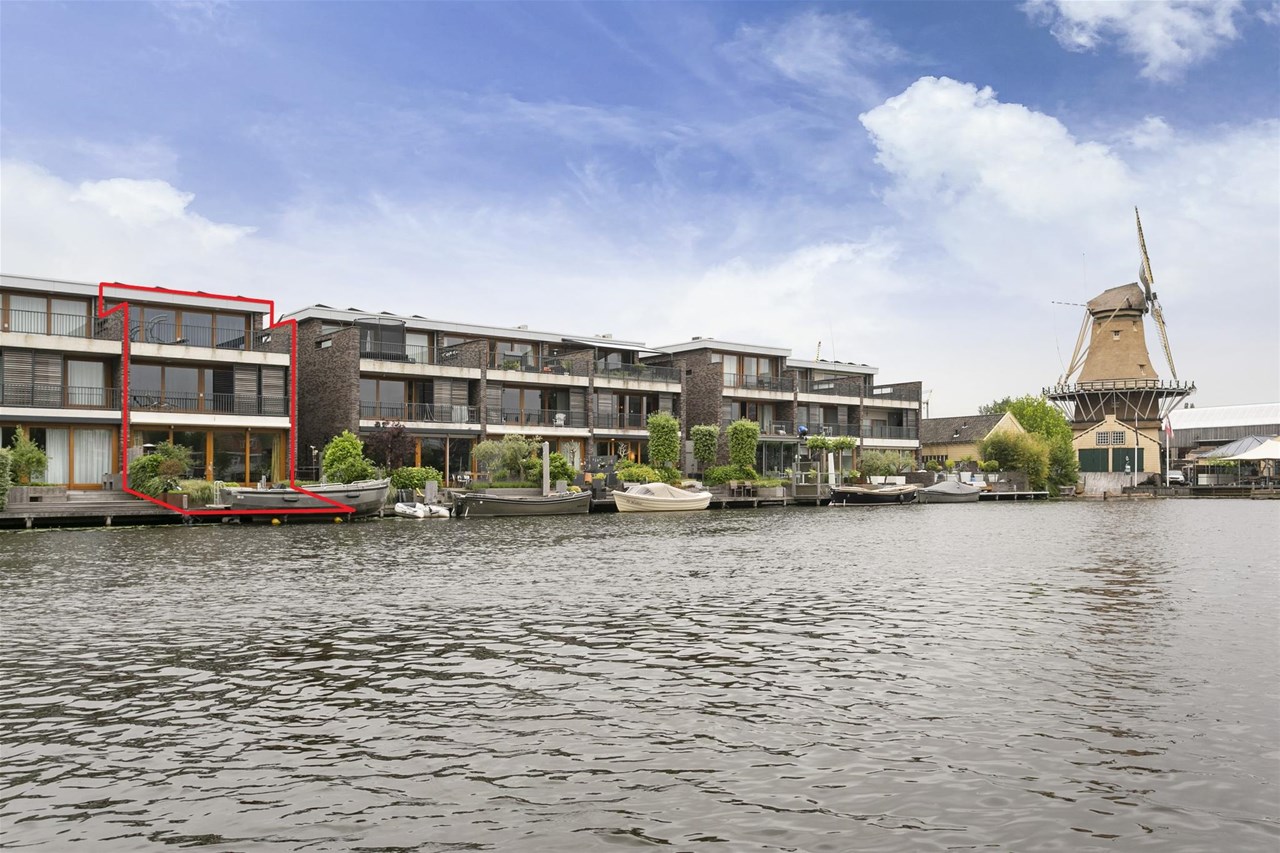 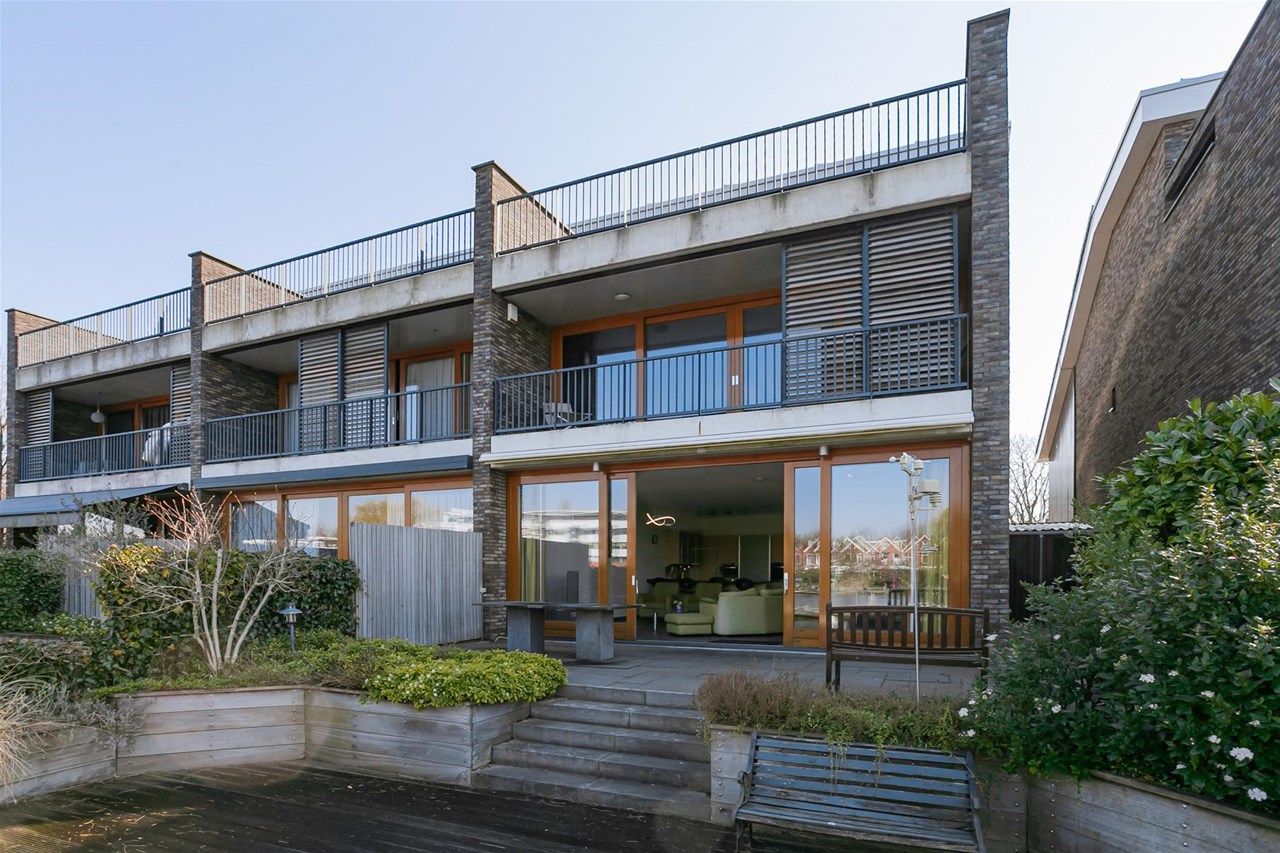 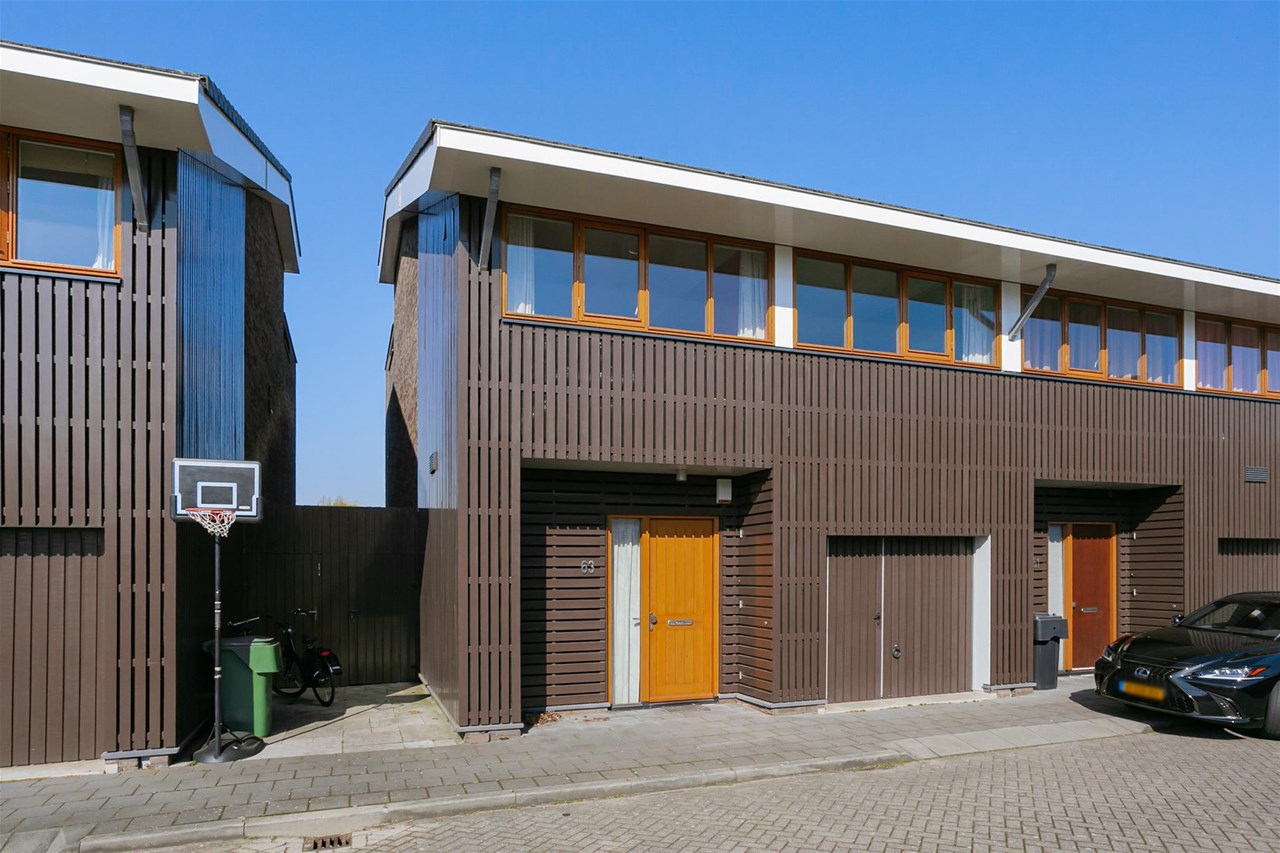 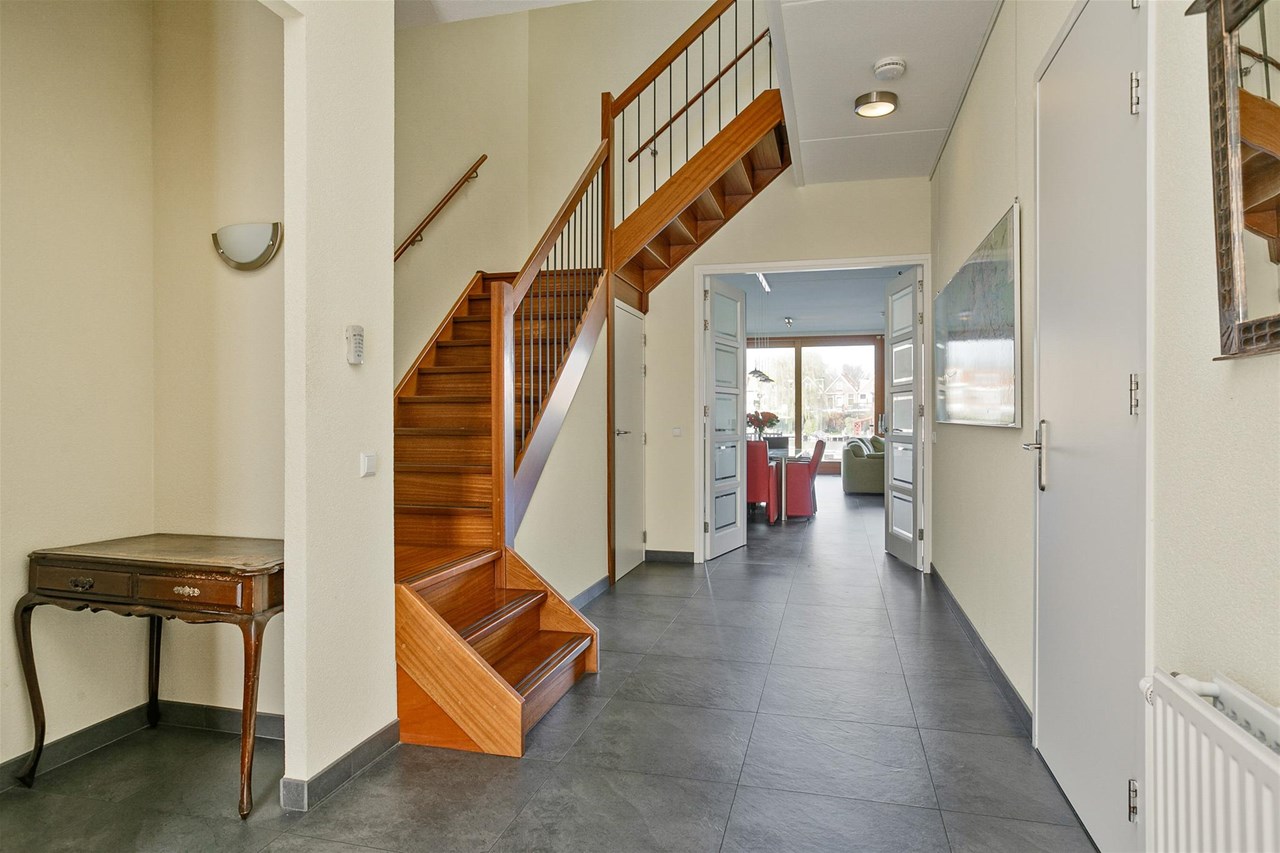 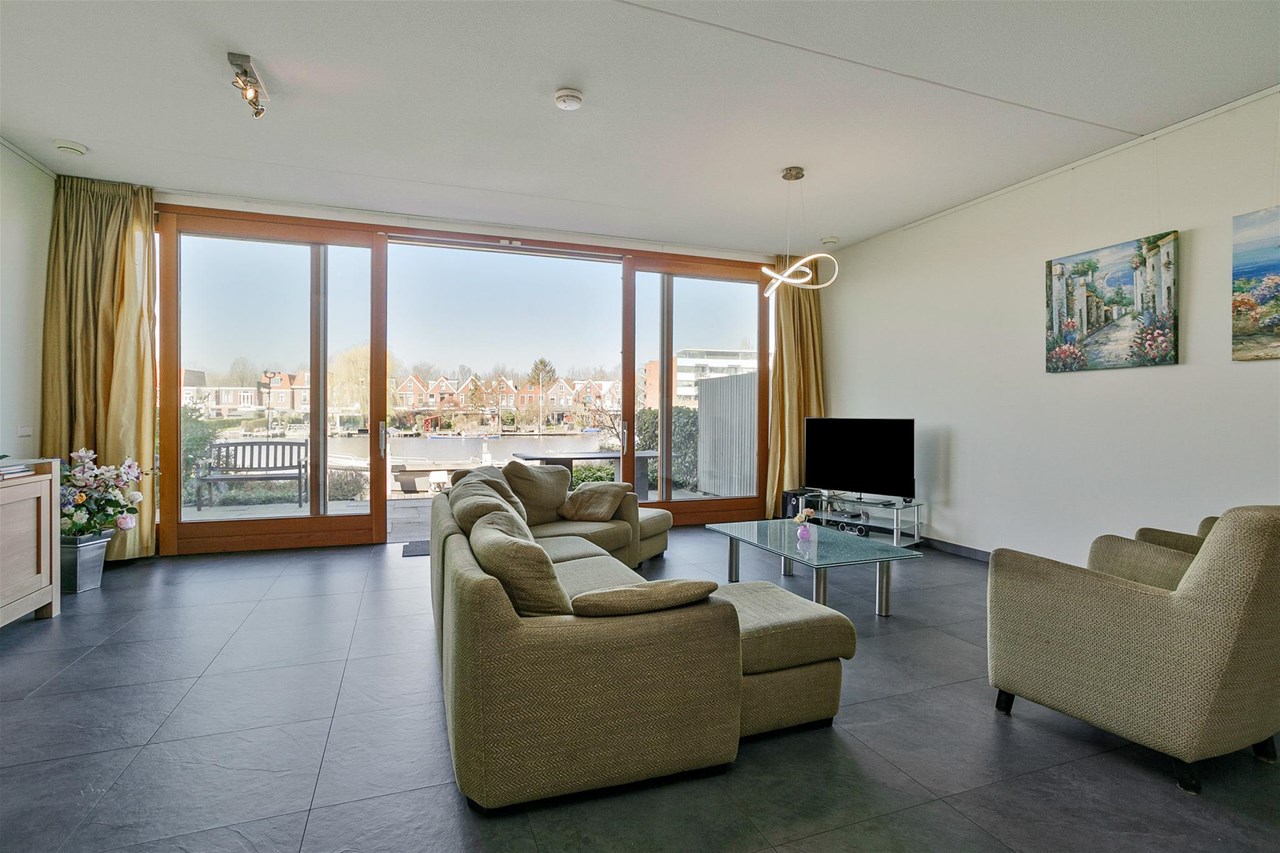 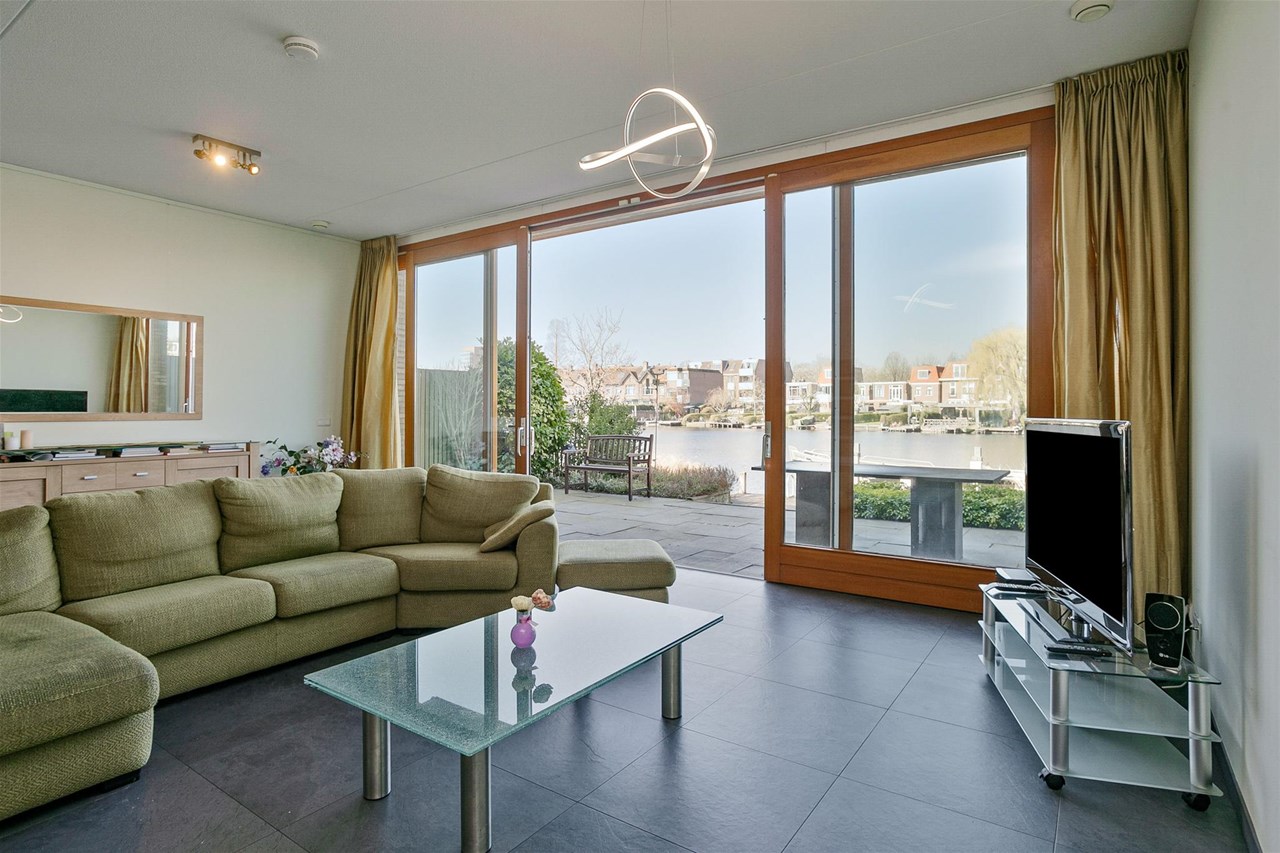 Properties like this are a rare find in Leiden. Here are just some of the unique features:
- The space: this house offers no less than 236 m2 of living space plus a garage of 24 m2, a spacious basement with standing height of 19 m2, a balcony + roof terrace of over 53 m2 + the sunny and beautifully landscaped garden beside the water!
- The location: beautifully situated on a wide section of the Rhine with a lovely waterside garden and a private jetty for the boat. This house even has a boat lift (!) so that the boat can always be free of waves and does not necessarily have to be put into storage during the winter. The boat that is present at the moment is possibly available for take-over.
- Quality and durability: this house was built in 2009 to the highest quality standards. The house is also very well insulated in accordance with the latest standards. In addition, 8 solar panels have been installed on the roof; good for approximately 1,900 KWH/year. Of course, the house is also fully double glazed and has roof insulation. An independent architectural report is available that confirms the excellent state of maintenance of this property.
The house is within walking distance of the historic, bustling centre of Leiden with many restaurants, museums, the theatre, cinemas, shops and the Central Station. Also located near several schools and sports facilities. And within a few minutes' drive you will find various arterial roads (A4, A44 and N11 towards Amsterdam, The Hague and Utrecht).
Parking is not a problem: the house has its own (numbered) parking space in front of the door and an indoor garage. There is also a possibility of access to the rear of the property through a wide, lockable gate beside the house (3m. wide, half of which belongs to the property) where there is also a shed.

Accommodation:
Very spacious entrance hall, modern toilet, (wardrobe) closet, door to the garage with electrically operated door where, behind a sliding wall, the central heating installation, the underfloor heating distribution system, the HRS installation and 2 boilers are located. An attic floor in the garage provides additional storage space. Door to the cellar of approx. 19 m2, with standing height. From the hallway you access the living room with open kitchen. The thing that strikes you immediately upon entering is the spaciousness of this area (approx. 67 m2) and the amount of light thanks to the glass rear door over the entire width (with sunshade over the entire width). This room features a beautiful tiled floor with underfloor heating. The kitchen is very luxurious and, as you would expect, is equipped with all kinds of modern appliances.

The double sliding doors give access to the beautifully landscaped garden with several seating areas and a wide jetty of approx. 8.5 metres alongside the Rhine. The garden is equipped with a watering system that pumps water from the Old Rhine.

First floor: landing, bathroom with shower, washbasin and toilet. Next to the bathroom there is a room for the washing machine and dryer. There are two spacious bedrooms at the front. At the rear you will find the very spacious master bedroom with walk-in dressing room, separate toilet and a luxurious bathroom with bathtub with jet streams, double washbasin and steam shower cabin. Double sliding doors give access to a balcony over the entire width with beautiful views over the water.

Second floor: landing, bedroom at the front with velux window. Here you also have access to a spacious indoor storage room. At the rear is a beautiful, wide (bed) room with a kitchenette. The double sliding doors give access to a very spacious roof terrace of approx. 40 m2. Here you can enjoy a stunning view until the sun goes down.
The access road behind the house(s) with the hedge and flowerbeds is the private property of all the houses situated here. An owners' association has been set up for this communal property, so that the maintenance is shared. The annual contribution is currently €500.

All in all, a very special and well-maintained house. Well worth a visit.
Read full description