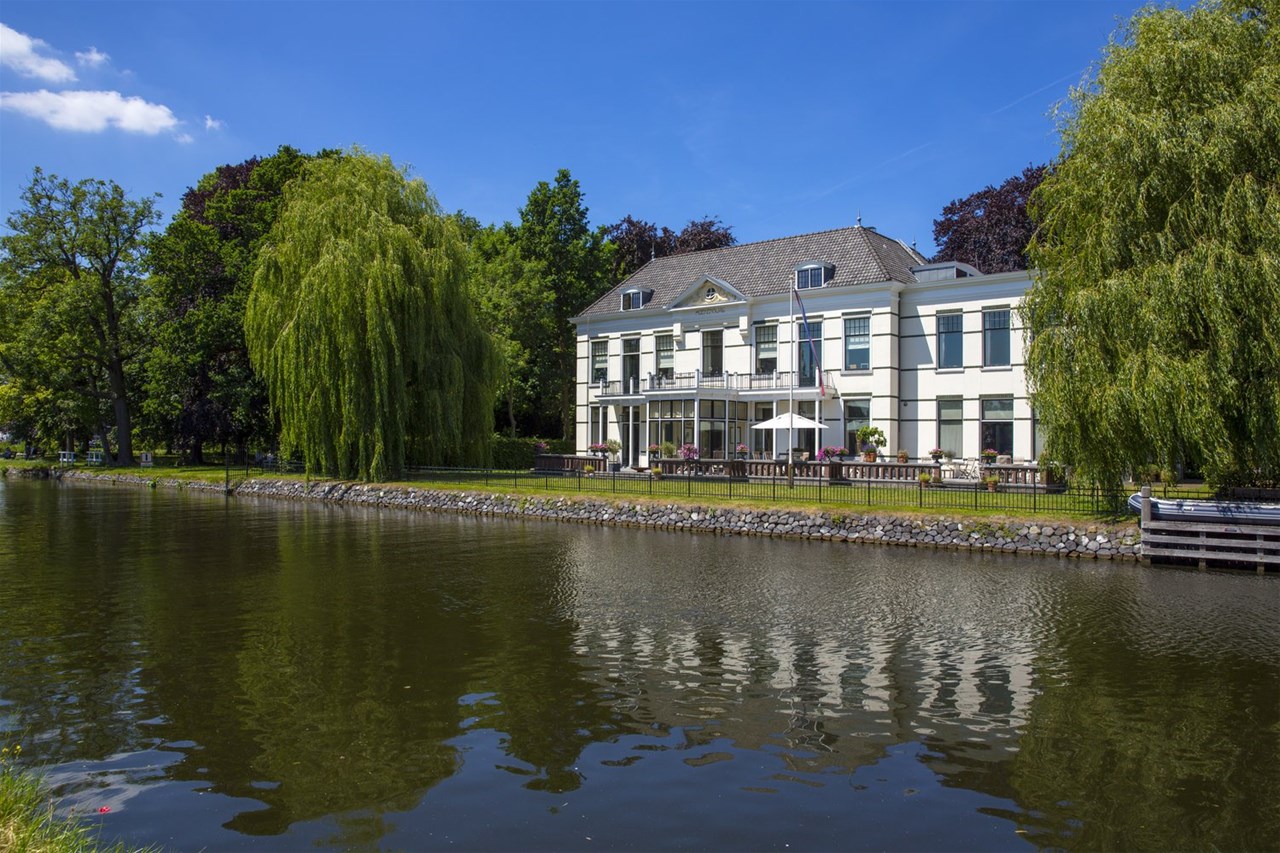 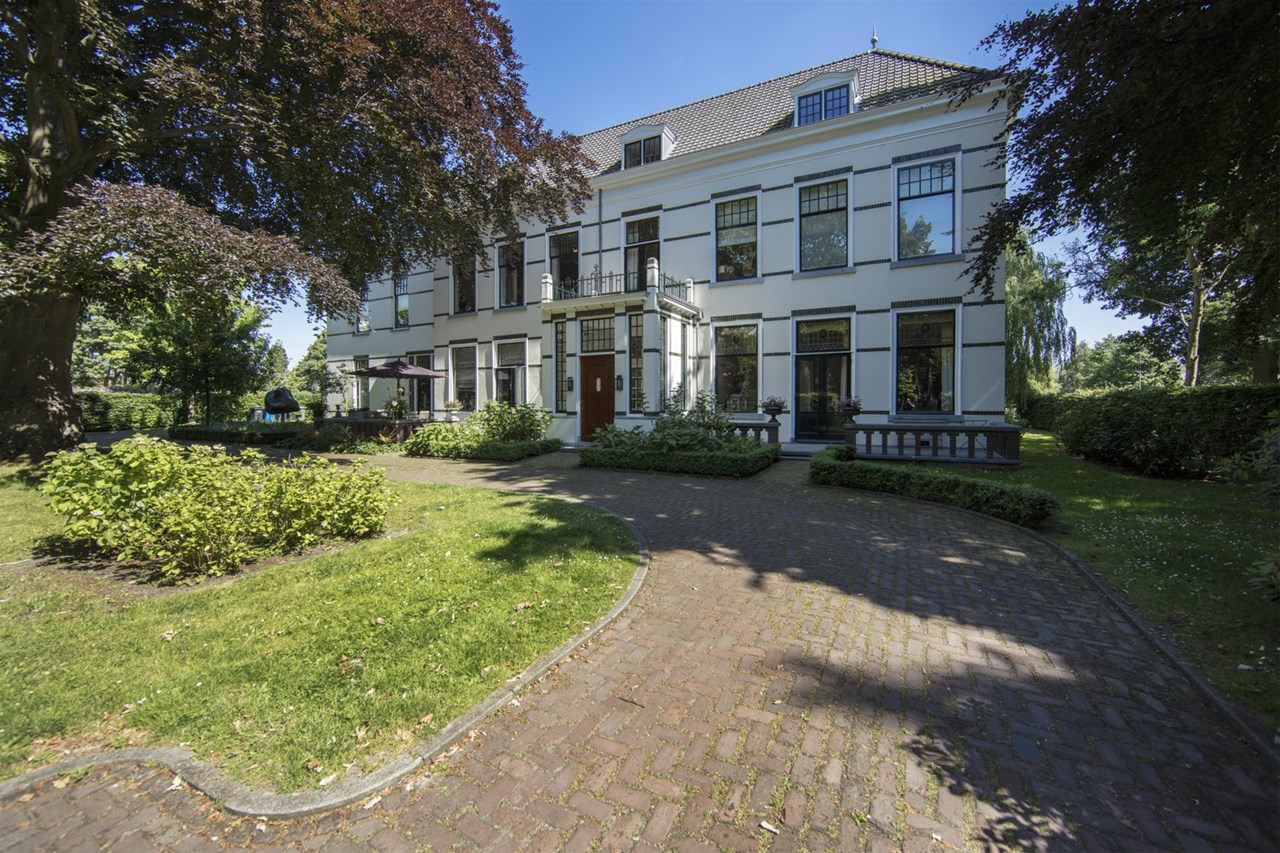 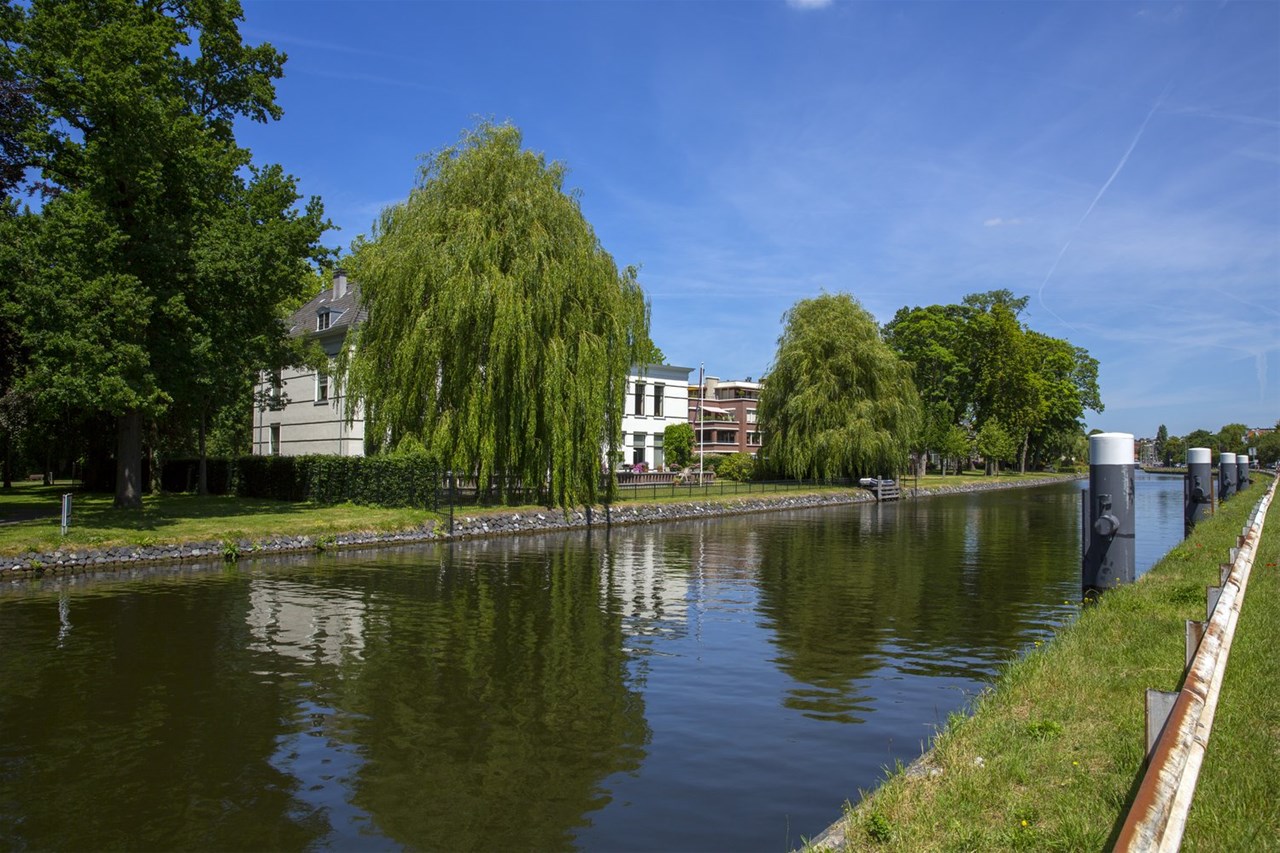 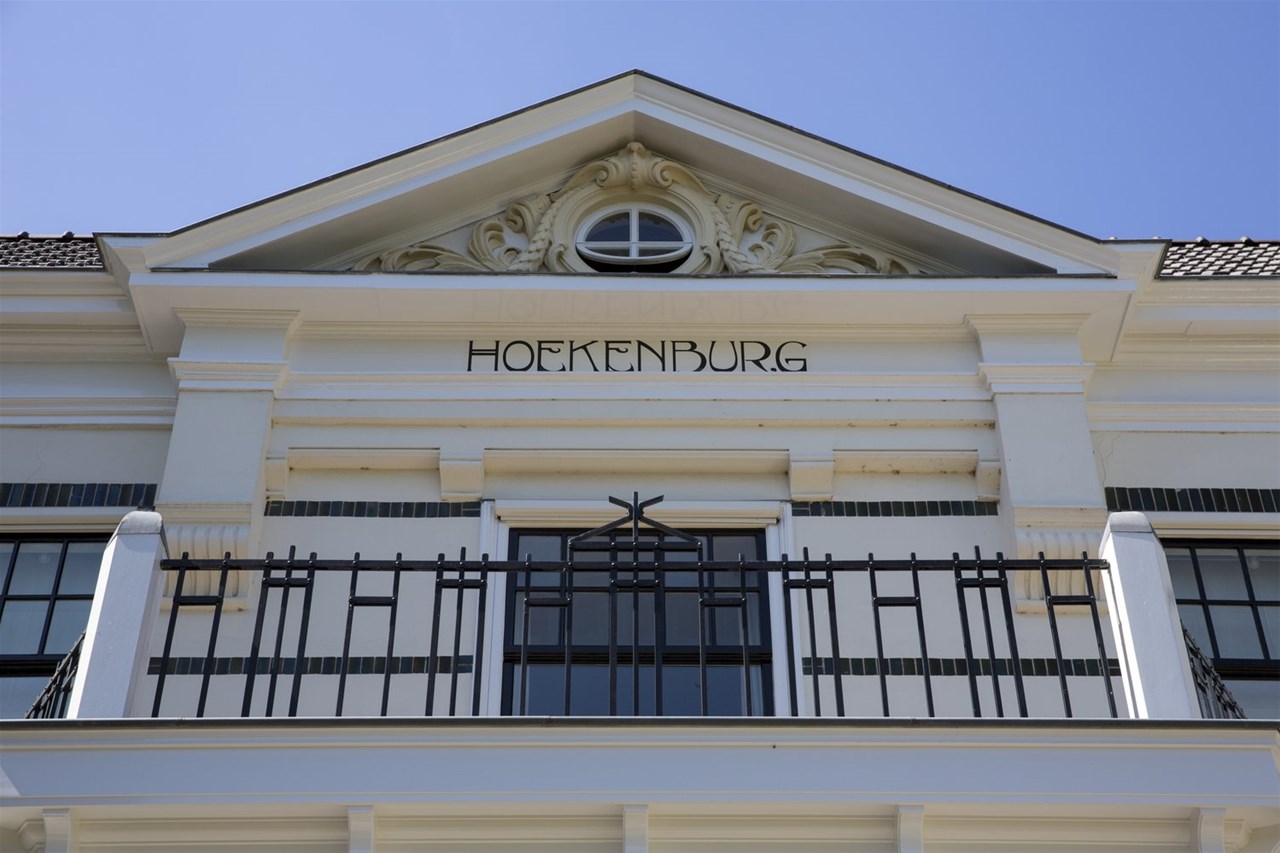 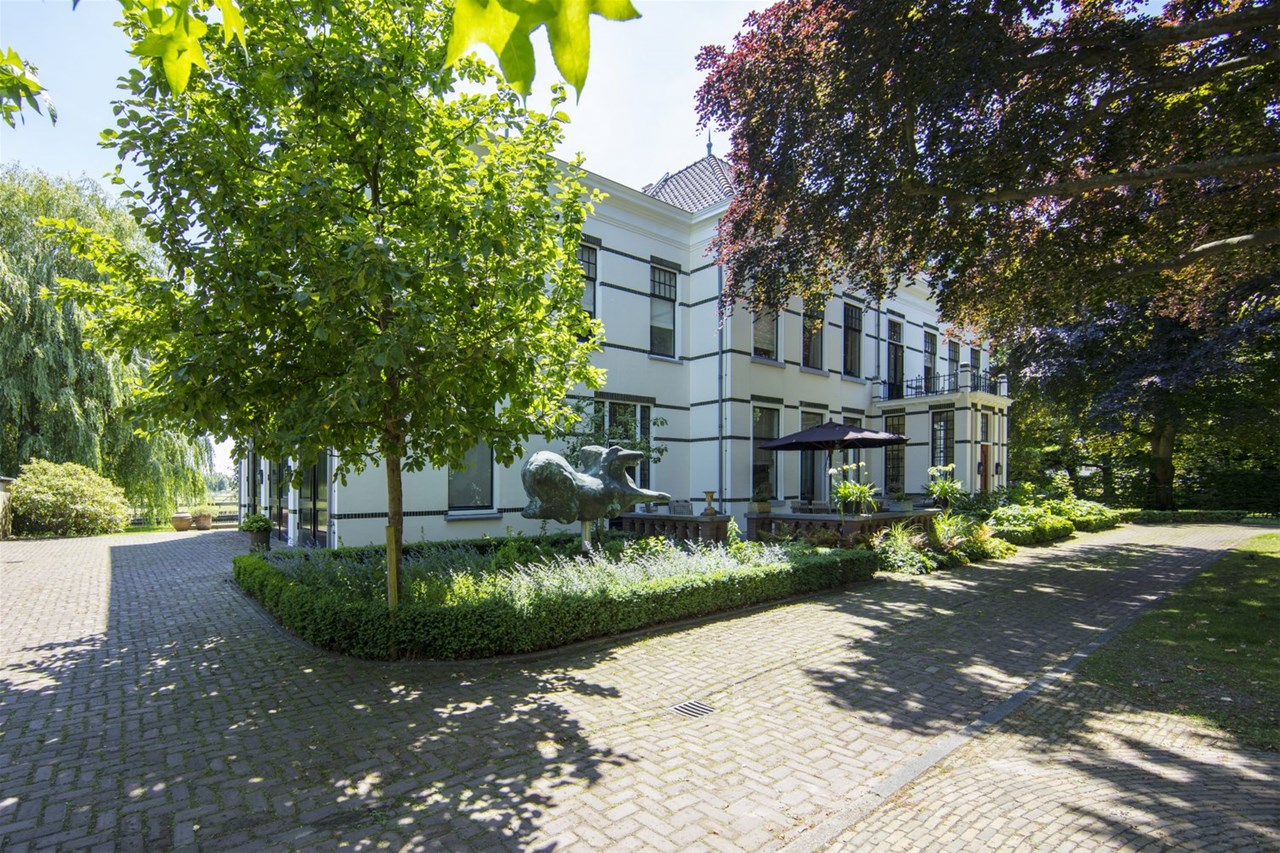 Situated Directly on the Vliet, monumental country house, House Hoekenburg, with all modern installations and wel finsished house, with the grandeur and details as we actually hardly ever encounter, a unique object. House Hoekenburg is a listed monument built in 1809, commissioned by the famous family Thorbecke. Through a detailed restoration in 2004-2006 in a perfect condition and equipped with the installations and finishing as we expect them today. The House now consists of a generous living kitchen, sitting, TV and dining room with conservatory on the ground floor and three garages, further on, upstairs a total of 9 bedrooms and 6 bathrooms, a fitness and laundry.

House Hoekenburg has a second entrance, therefore also ideal for a combination of living and working; Not only is the property extremely generous (floor space approx. 837 m2), but the double stairs and the elevator make the object rightfully multifunctional. The House stands on a plot of more than 2,000 m2 of freehold land, with a delightful garden around the Rijn-Schie canal, waterways from Rotterdam to Amsterdam, the property lies within the listed monumental Park Arentsburgh, approximately 25.000m2, where you as a resident of House Hoekenburg enjoy the park Arentsburgh, while maintenance is taken care of by the municipality.

For expat families convieniently located more or less in the middle of the British and American School, near the German and Franch Schools, and close to highway exits to Rotterdam (30 min. by car ) and Amsterdam 45 car minutes away, to downtown The hague city (political capital and International zone) center 10 minutes.

History:
Manor Hoekenburg dating from around 1809. At the beginning of the seventeenth century, the Manor Hooghenburgh (early named "hoekenburg") is already mentioned; In 1684 it gets the current name House Hoekenburg. In the south-east façade is a stone from 1809 with the names of the first owners A.F. and A.H. Thorbecke, nephews of the statesman Thorbecke. The interior with the Baroque paintings and the staircase originates from 1809. In 1909, Mr. J.D.M. de Voogt of the oil company Deterding, later director of the Batavian Petroleum Society, became owner of House Hoekenburg. At the entrance of the driveway, He made a iron fence, gate, which was replaced and since 1973 is at the Parkweg in Voorburg as the entrance of Park Vreugd en Rust.

The interior of Hoekenburg from 1809 is largely preserved during the renovations, the house is built from a rectangular floor plan in plastered brick. The entrance consists of a door in eighteenth-century style with an 18-panel glass top above, the main façade is on the side of the Vliet (south-east side).

The House has an asymmetric layout. In the entrance portal there is a marble floor and marble plates are mounted against the walls. There is a stucco ceiling and double doors with bevelled glass with bronze handle. To the Left of the Hall is a central corridor with rooms on both sides, in the hallway and corridor there is a marble panelling.

Along the main staircase is a wooden paneling with a mural depicting it in Neo-Baroque detailing with floral motifs and polychrome flower still lifes. Along the bottom of the staircase and on the ceiling in the hall there are panels with profiles in which paintings of swans and other birds. In The dining room on the Vliet side a paper-mâché ceiling with cove. The ceiling consists of a geometric pattern with Neo-Baroque frames in green and gold, floral motifs, palmettes and trompe l'oeil painting with Cherubim. The exterior is virtually originally kept and the interior is rare because of the quality and quantity of Neo-Empire and Neo-Baroque-detailing parts of the interior, especially in the hall and stairwell. (SOURCE: Rijksdienst voor het Cultureel Erfgoed)

About A property like this you don't actually have to write that you have to see with your own eyes, we therefore cordially invite serious candidates for a viewing, we would like to make an appointment, which is always by appointment, during or outside of office hours.
Read full description