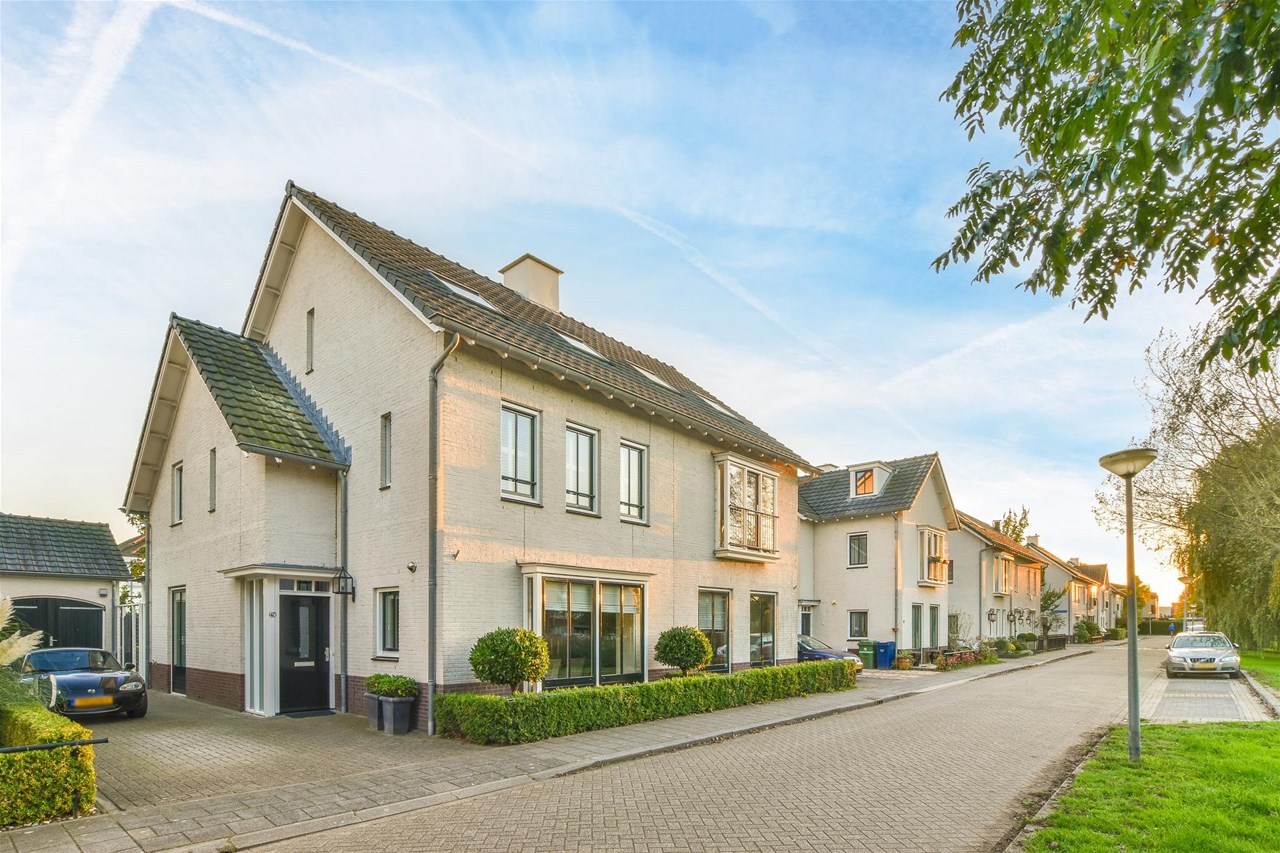 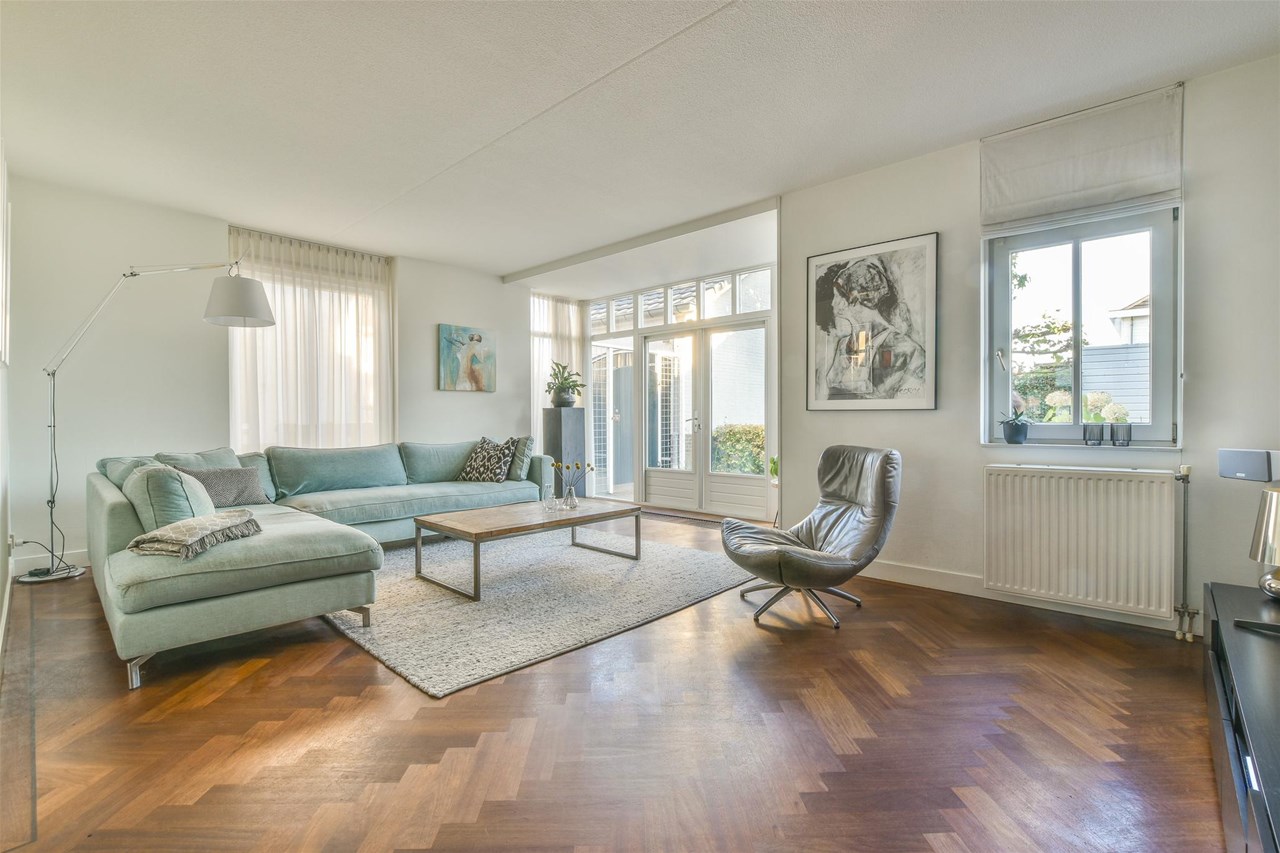 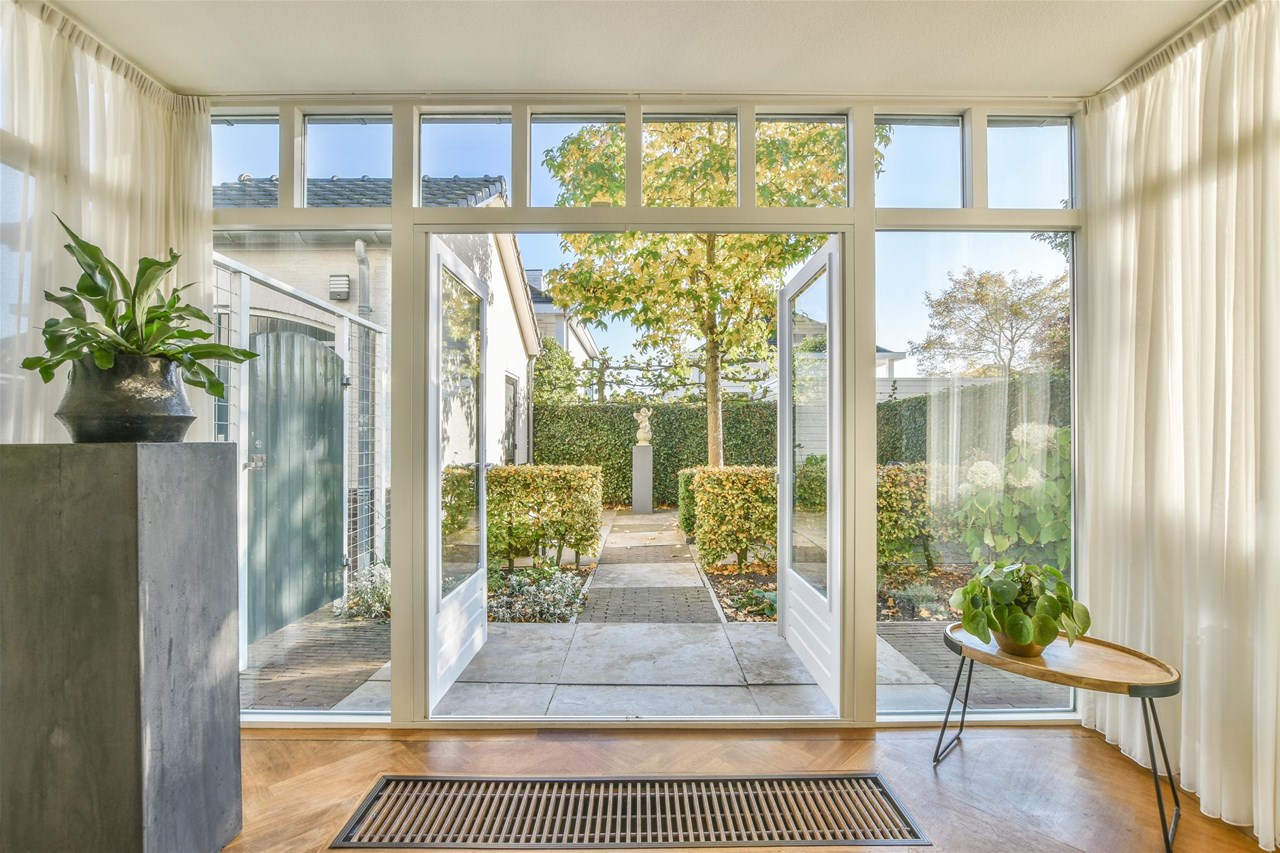 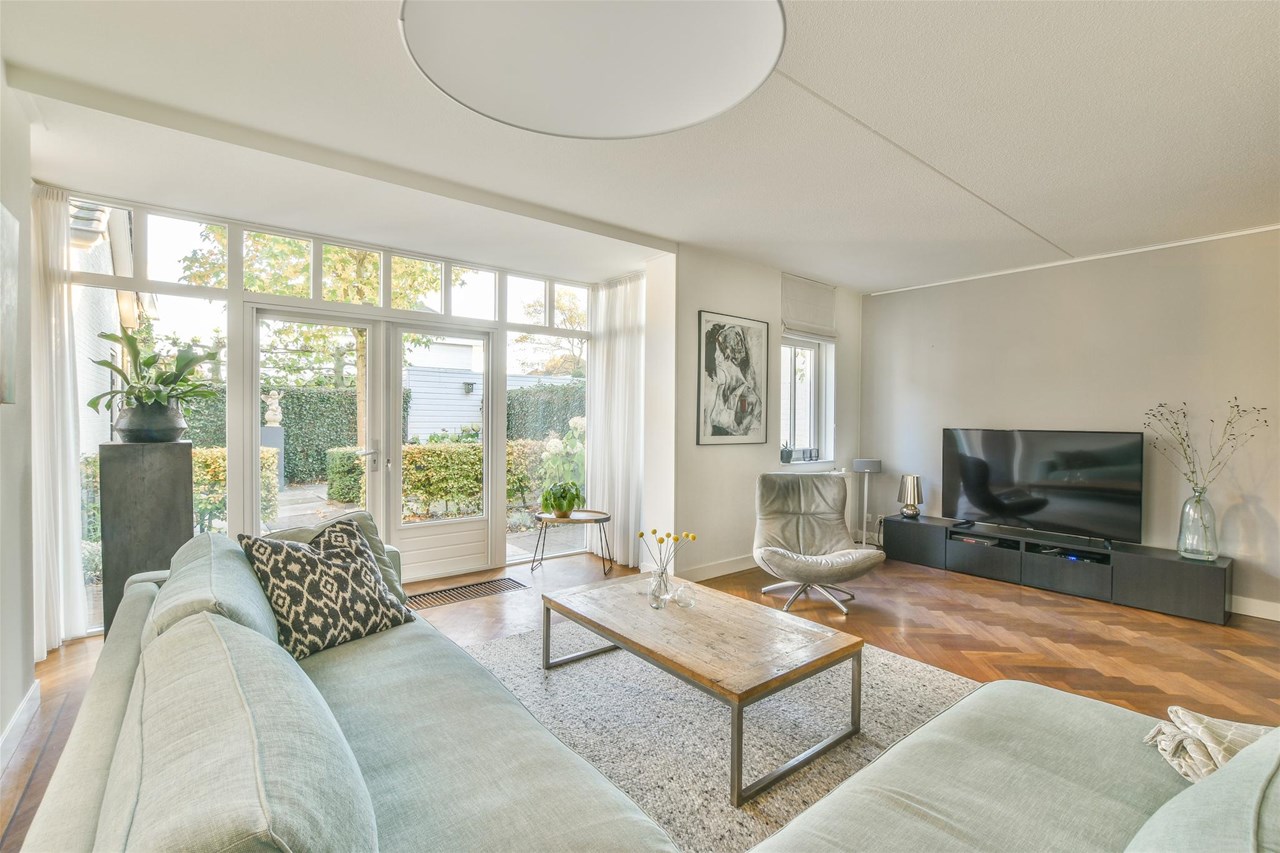 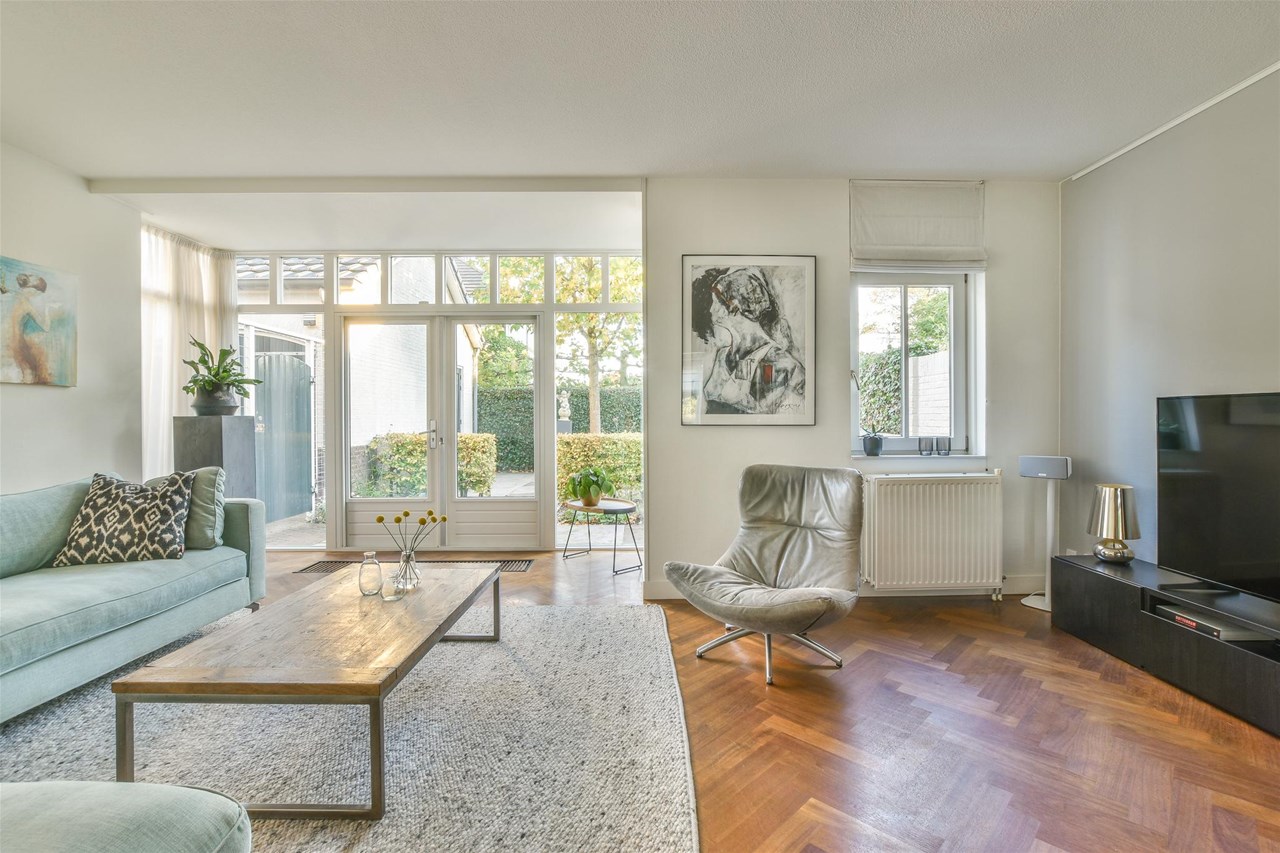 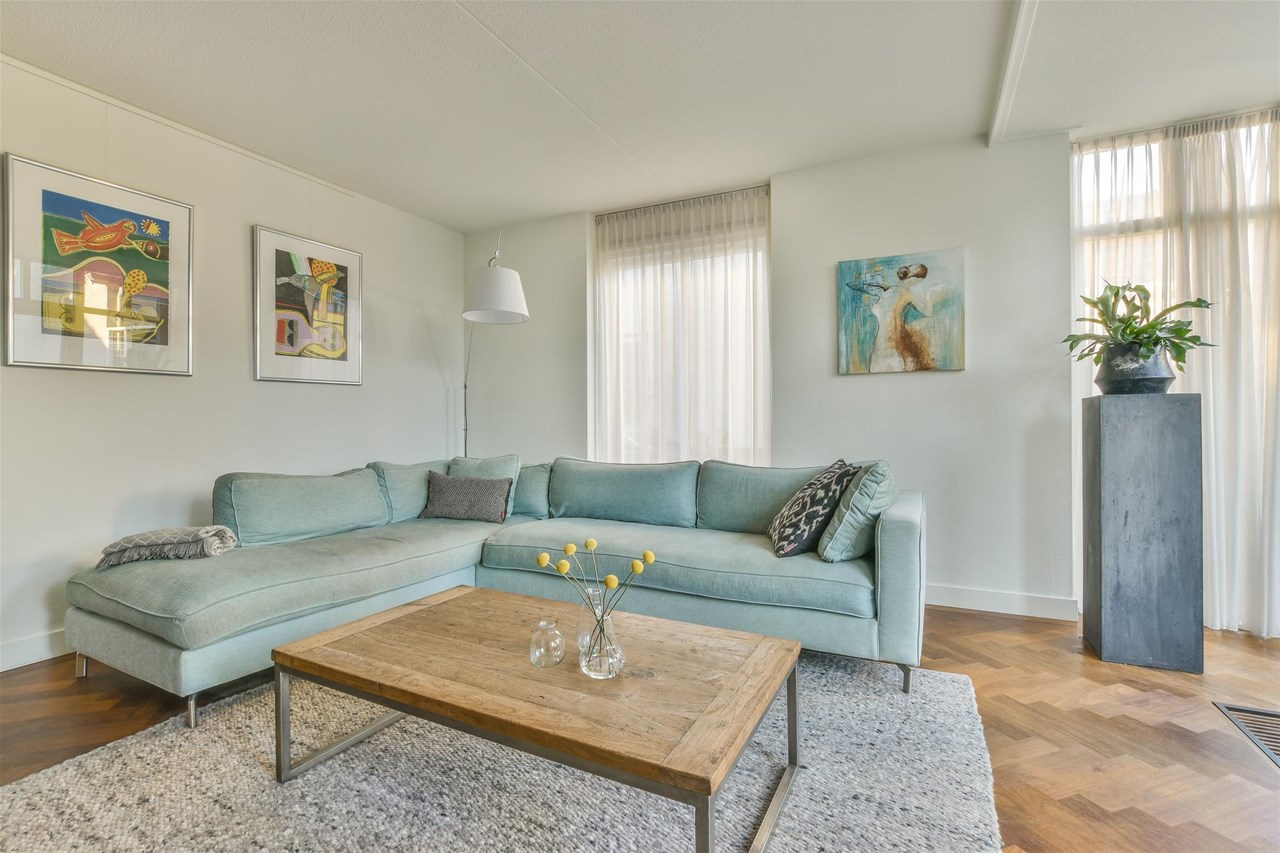 This characteristic semi-detached property is situated in one of the prettiest streets of the popular Literatuurwijk area and has a detached garage, a private driveway and an unobstructed view of the green surroundings and the canal at the front. The property was built in 2002 as part of the ‘The English Way of Living’ project, which was designed by architect firm Mulleners + Mulleners and is characterised by a traditional construction style with roof overhangs, dormer windows, bay windows and zinc gutters and drain pipes. The secluded south-east facing garden borders on the side gardens of the houses at the rear and therefore offers a lot privacy and a view of the pretty green surroundings. The large brick garage includes a handy storage attic beneath the slanting roof. The drive way is not shared and offers ample private parking space for multiple vehicles.

Location:
Jaap ter Haarstraat is a quiet and green street with charming courtyard areas and mainly residential traffic. The area has various primary schools, including an international primary school and is not far from Almere Poort where the international secondary school is located. You can find a supermarket, healthcare centre, community hall and gym within walking distance. The city centre is just 10 minutes by bike or car. The Pampushout and Kromslootpark nature areas both border on this area.
Literatuurwijk is conveniently situated near the access roads to the A6, A27 and A1 motorways. The area also has good public transport, including nearby bus stops and train stations (Almere Muziekwijk and Almere Poort train stations), from where you can travel to various destinations.

Layout:
Side entrance, hall with mezzanine, a fitted cupboard in which the meter cupboard is incorporated, hard wooden stairs to the first floor, toilet with small washbasin, large L-shaped living room with herring bone parquet flooring and at the rear a bay extension with French doors to the back garden. The kitchen-diner is situated at the front of the property and also has a bay window. The L-shaped kitchen has a black granite worktop and various kitchen appliances. The hall and kitchen have Portuguese floor tiling.

First floor
Landing with mezzanine, bathroom with washbasin cabinet with double washbasin and mirror cabinet, walk-in shower, bathtub and second toilet. At the front of the property, the master bedroom which runs along the full width of the property and has fitted wardrobes and window shutters. At the rear, two good-sized bedrooms, one of which has a fitted wardrobe. The fitted stairs on the landing lead up to the second floor.

Second floor
Landing with tailor-made fitted utility cupboard for the washing machine and drier and a sink cabinet. This floor has two further bedrooms, the largest of which runs along the full length of the property. This is a very bright room due to the side window and the Velux roof windows at front and rear and has additional storage space beneath the eaves. The second bedroom is located at the front and also has a large roof window. The large attic above this floor is accessible via the loft ladder on the landing. The first and second floor have laminate flooring throughout.

The purchase contract shall include a clause stating that we have invited the prospective buyers to have their own measurement of the property carried out. Should the prospective buyers decide not to have such a measurement carried out, they automatically indemnify Pappie & Van der Zee Makelaars o/g and the owners of the property against any liability.
Read full description