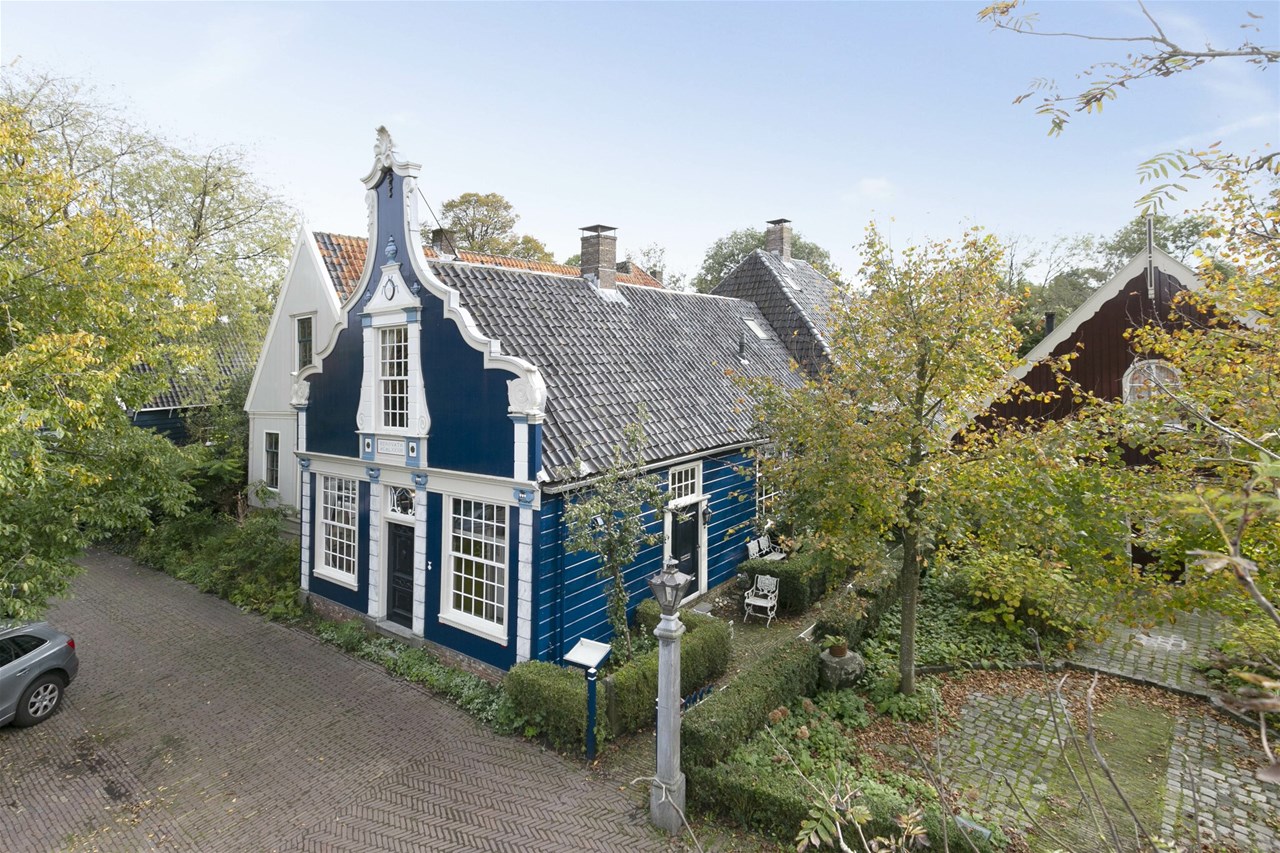 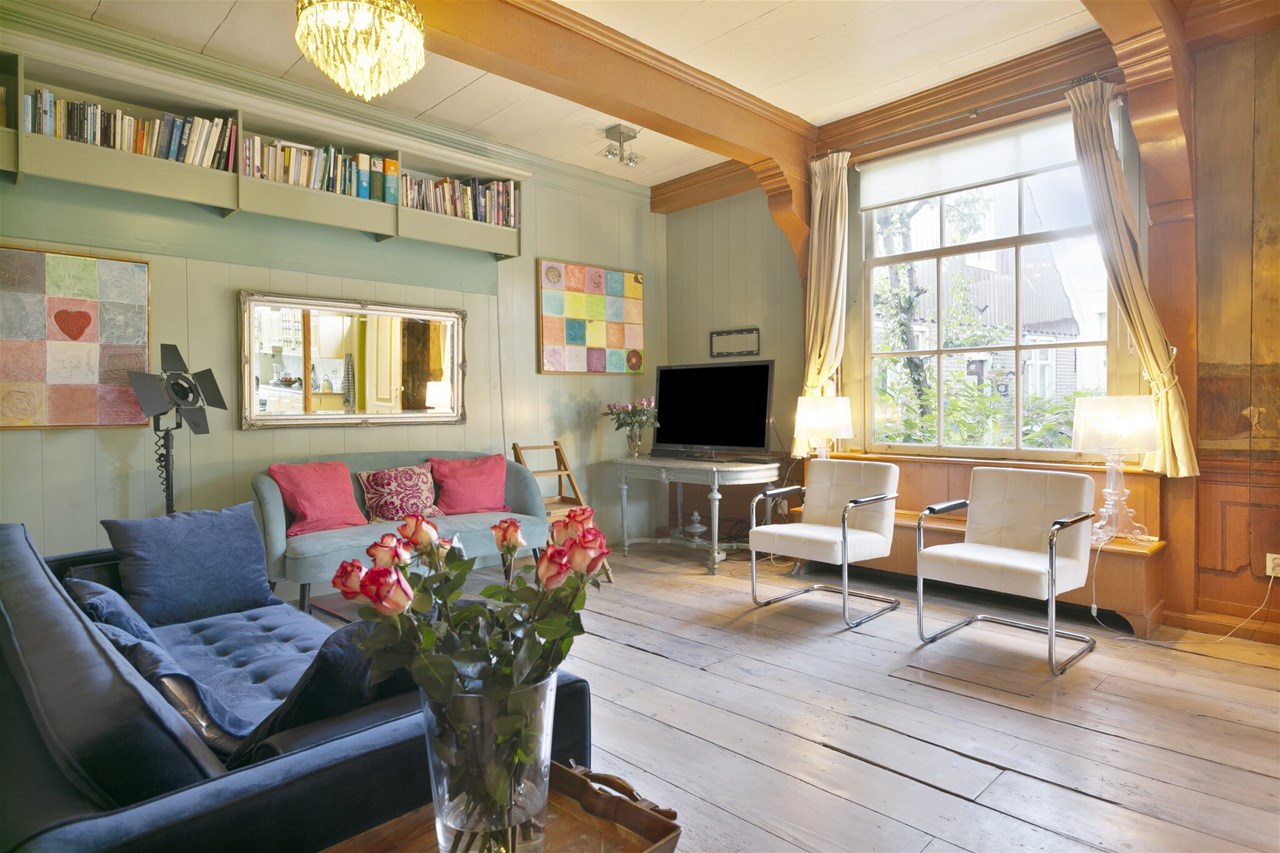 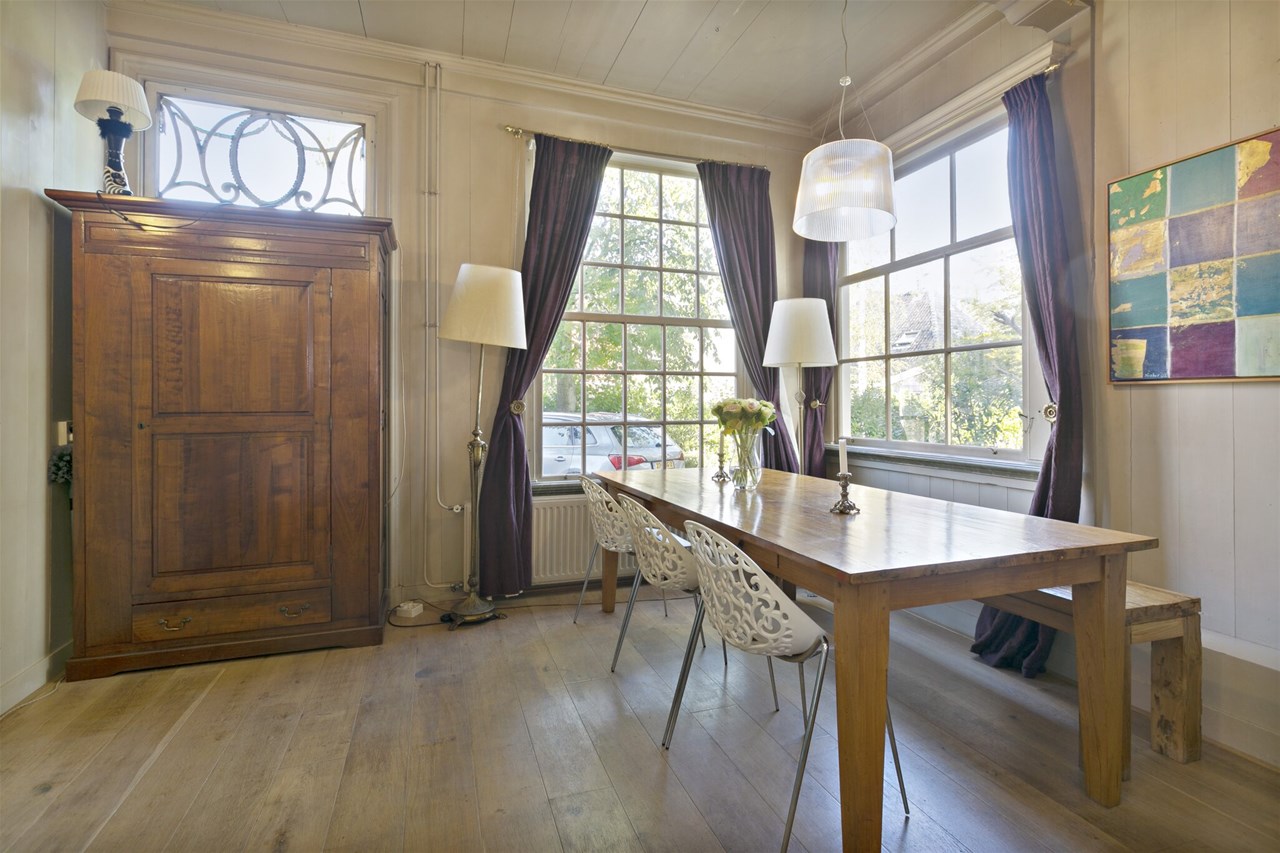 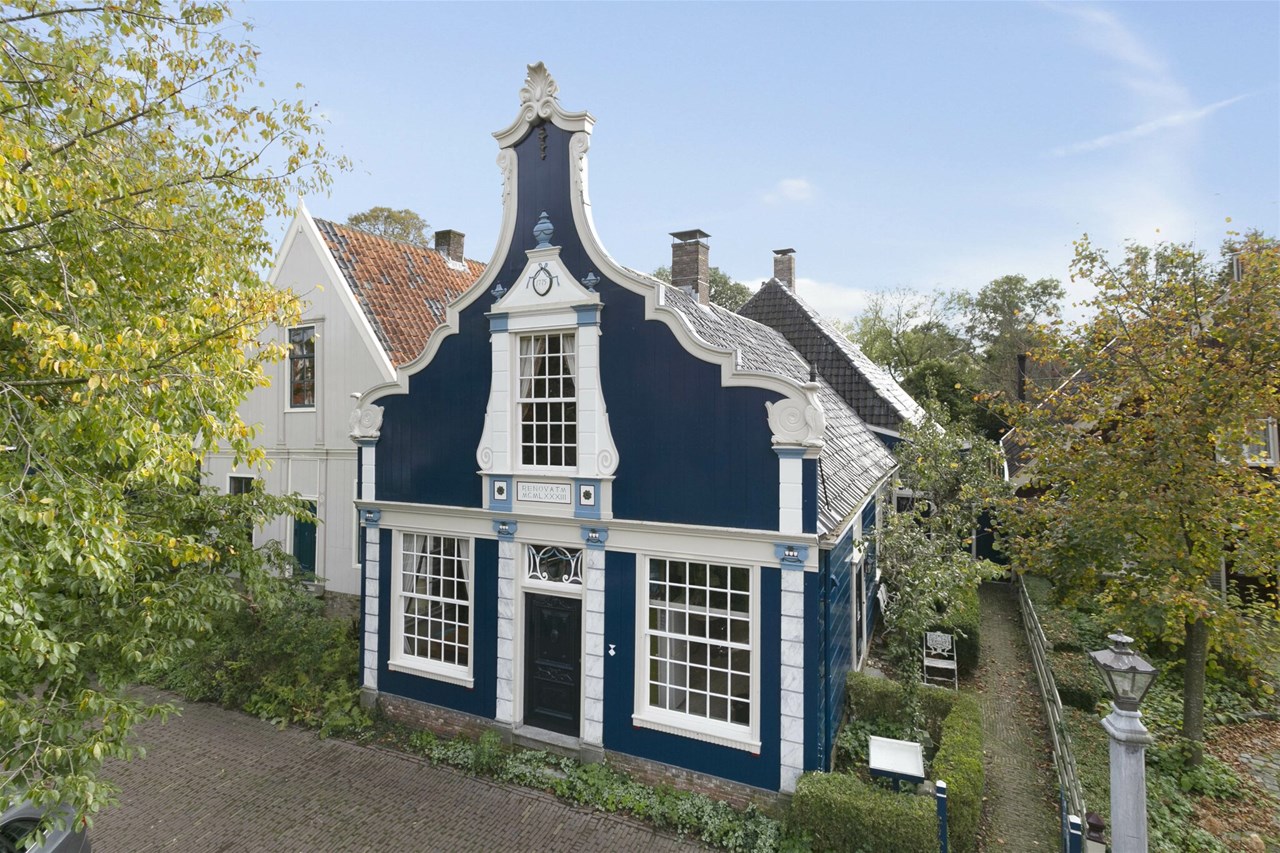 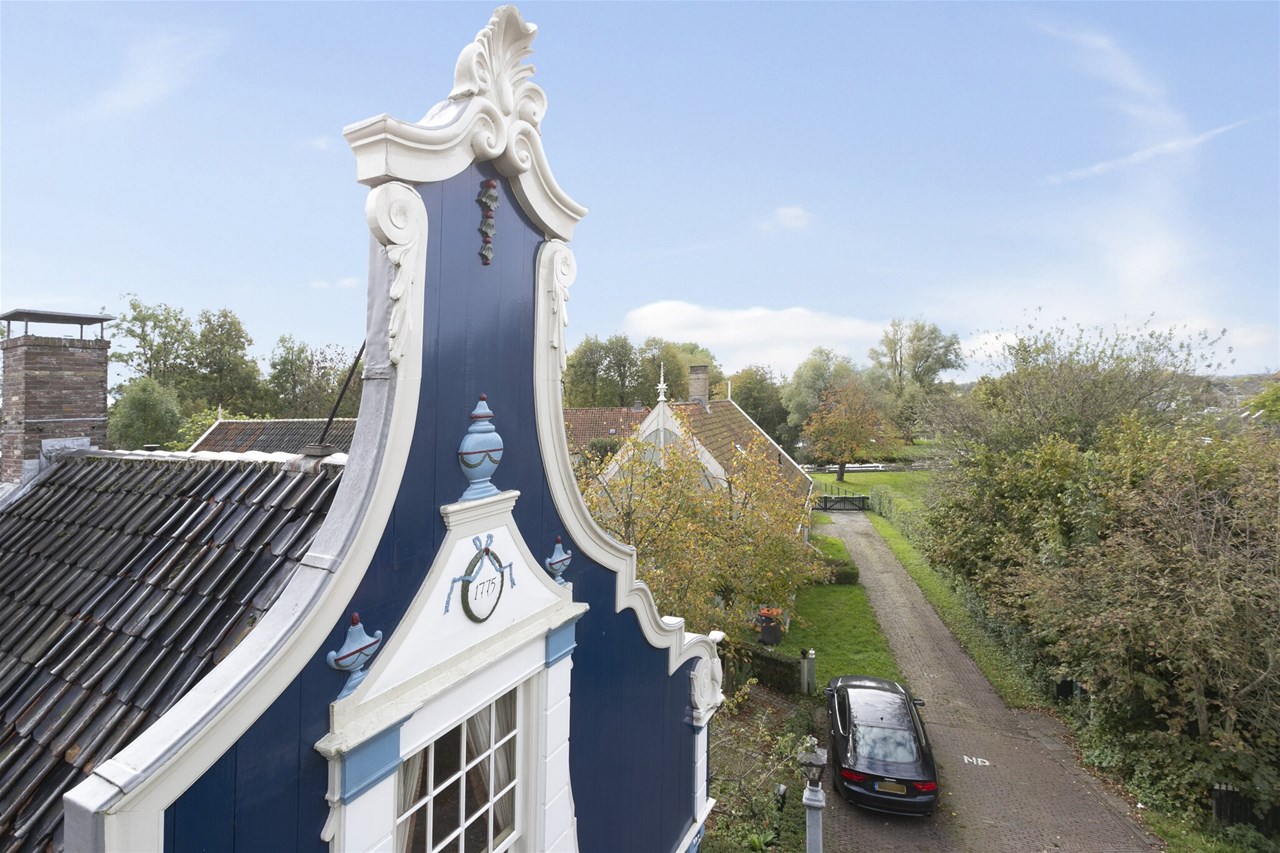 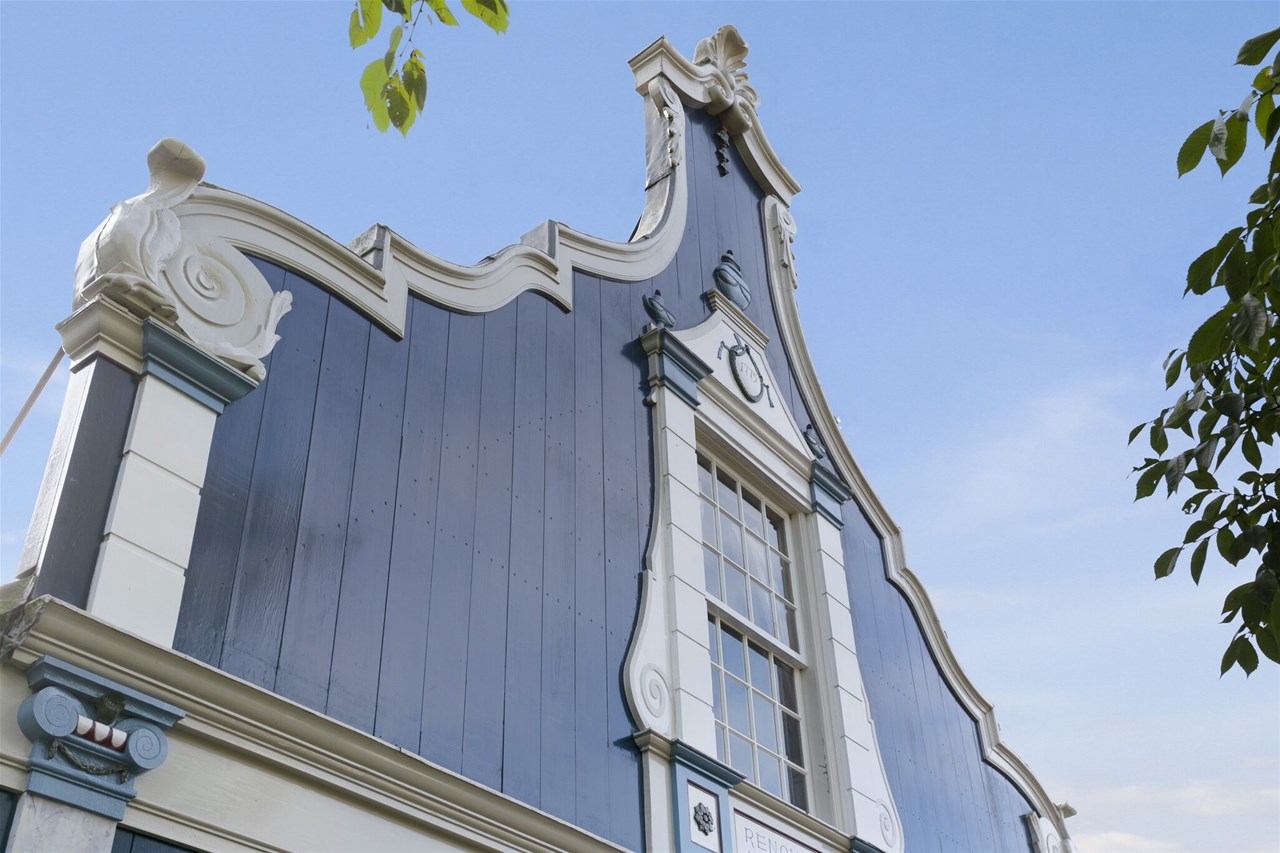 Dating from 1775, this house was once the home of the Attorney General, or Sheriff, of Broek in Waterland, a beautiful and well-preserved village just outside Amsterdam. Broek in Waterland has 83 listed buildings (or ‘monuments’, in Dutch). This one has a cluster of period features that set its apart: its dramatic facade, ancient wall paintings, alcove beds and wood panelling. Aside from the Attorney General, this house was also occupied by commodity traders. It served at one point as a French boarding school and a library, as well as a firm of architects.
In 1983 the house was restored to all its former glory by architect Ger Husslage (Amsterdam Construction Academy), who during his work uncovered a treasure-trove of old wall paintings. In 2015 the facade of the house was again restored and the outside was painted. Two new bathrooms were created and a new staircase to replace the original ladder.
The house consists of a living-room, dining room, large kitchen, 2 bedrooms and 2 bathrooms. On the west side of the house, by the entrance, is a small garden where you can enjoy the sun until late. Behind a blue door, a garden path takes you to a large, south-facing garden, situated at the back of the property. The garden, which is is not adjacent to the house, has a strip of garden that borders onto the lakes, with use of the neighbour’s mooring point. Behind the mooring platform, the garden has space to store a small boat or canoe, which can be used to explore the whole of Waterland. The property rests, together with the garden, on its own ground, an area of 345 m².

GROUND FLOOR
The entrance is on the side of the house.
Spacious kitchen, worktop and kitchen units, oven with fan, grill and pizza functions, electric hob, dishwasher, meter cupboard, large, paned, front window.
Entry to the living room through two beautiful, carved, arched doors. Authentic 18C wall paintings on (s)west-facing wall.
The living room is spacious and stately, with fascinating landscape paintings on the wood panelling, an authentic old wooden floor made of wide planks, an oversized fireplace, with an old painting of Broek in Waterland’s waterfront, the Havenrak, above it.
The back wall of the fireplace is decorated with antique Delft blue and white tiles.
Next to the fireplace there is an original alcove bed, now used as a cupboard. Under the window there is an extra wide window sill that serves as a window bench.
The downstairs bathroom (2015) is decorated with black marble and comprises a rain shower, toilet and a copper basin (hand-made in Italy), sunk into an old-Dutch chest of drawers. It has under-floor heating.
The dining room has two large windows (north- and east-facing). The dining room can be reached from the kitchen and the living room.
Via an easy staircase, which was installed in 2015, from the dining room you reach the upper floor.

FIRST FLOOR
The large bedroom at the front of the house has a high ceiling with exposed beams and a paned front window. It has two alcove beds (200 cm x 160 cm) with painted woodwork, and a spacious wardrobe between the two. The room has an elegant, marble washbasin dating from the first half of the last century.
The bedroom at the back has a loft window and built-in cupboard. The old chimney runs through this room. Still in place is the wooden internal window shutter, which in the old days, they would open in the evening to allow the warmth to enter the bedroom.
The bedroom has an ensuite bathroom with bath, rain shower, toilet, bidet and two washbasins. The bathroom is decorated with white marble mosaic wall tiles and polished ceramic floor tiles.

GARDEN
Side garden on the west, adjacent to the house. Through a garden path you arrive in the large, south-facing back garden, with a shed where bicycles and other items can be stored and a small pier onto the lake. There is more than enough space here for gardening pursuits, for children to play, with trampolines and climbing frames etc.

LOCATION
Broek in Waterland is one of the most beautiful villages of the Netherlands and is just 10 kilometres north of Amsterdam. So you can get to the Nieuwmarkt in Amsterdam faster than many Amsterdam residents!. The transport connections are excellent. The bus stop is a 2-minute walk away. There are currently 12 buses arriving per hour during the day, bringing commuters to Amsterdam’s Prins Hendrikkade in 12 minutes, or to Gare du Nord at the end of the Noord-Zuidlijn. From here you can get to the World Trade Centre in 15 minutes and to Amsterdam CS in 4 minutes.
For cyclists, it’s 20 minutes to Station Noord, and car drivers can reach the A10 Ring Amsterdam in 5 minutes.

Aside from its historic, picturesque houses, the village has a neighbourhood supermarket (Spar), an old-fashioned grocer in an old-fashioned shop, two bar-restaurants and a ‘typical’ pancake house, a creche, a primary school, a weekly Wednesday market with fresh fish and flowers, a sport school, tennis and football club, and several riding stables. In the immediate area you will find a myriad of cycle and walking paths for exploring the Waterland landscape.

Waterland consists of the cores Monnickendam, Marken, Broek in Waterland, Ilpendam, Katwoude, Overleek, Purmer, Watergang, Uitdam and Zuiderwoude. Each place has its own charm due to its cultural-historical background. Enjoy the well-preserved monuments in the old towns and villages. Almost half of the total area of Waterland consists of water (no less than 5,000 hectares). The municipality of Waterland therefore has a lot to offer in the field of water recreation, from sailing on the Marker or IJssel lake to walking along the water in one of the municipality’s multiple picturesque places.