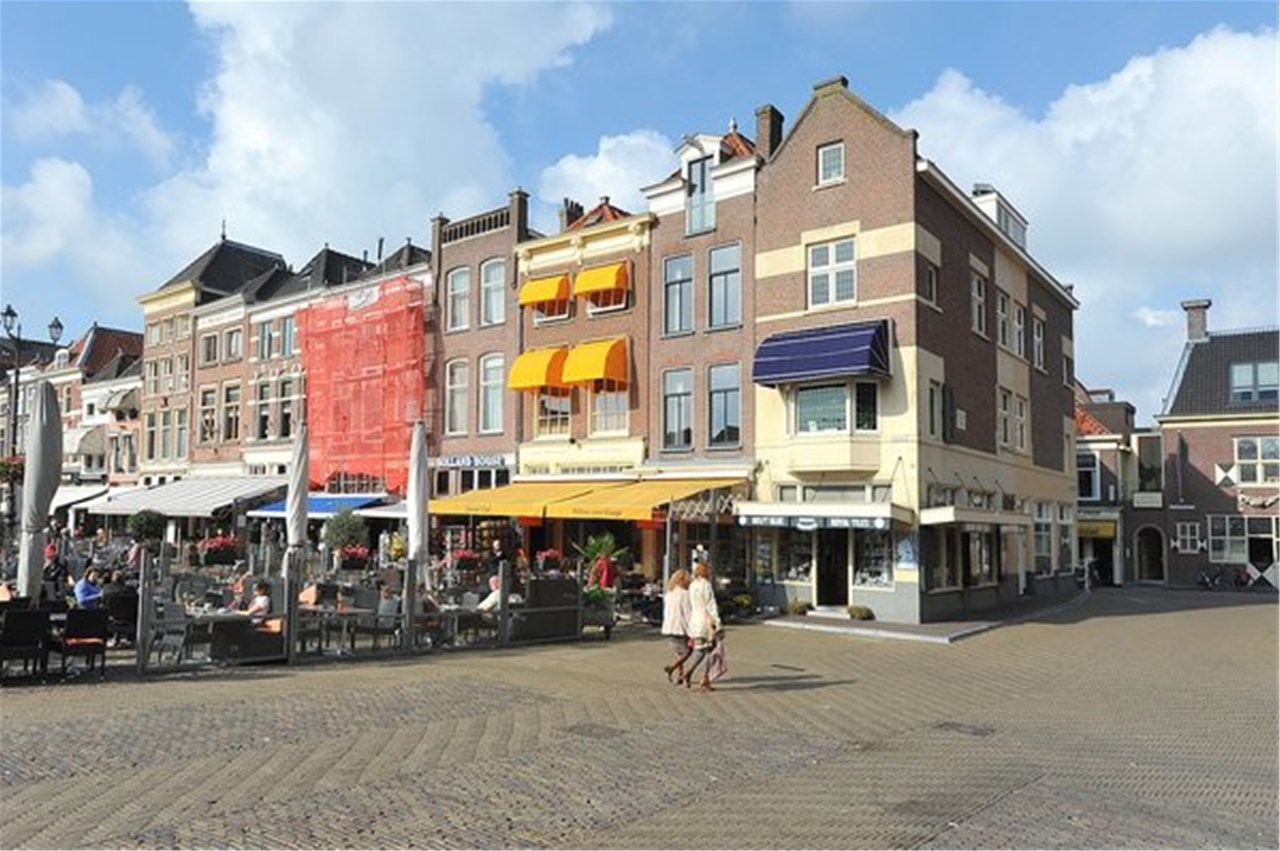 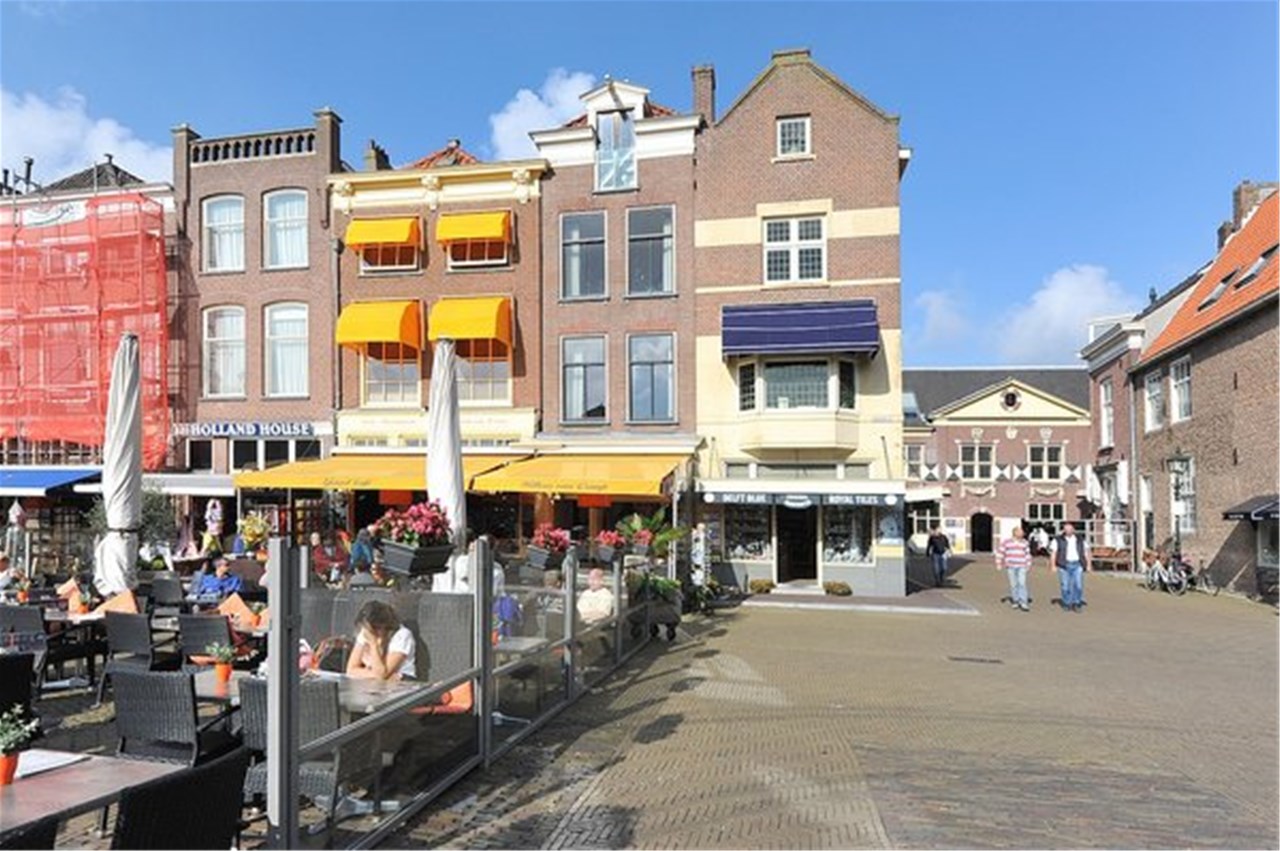 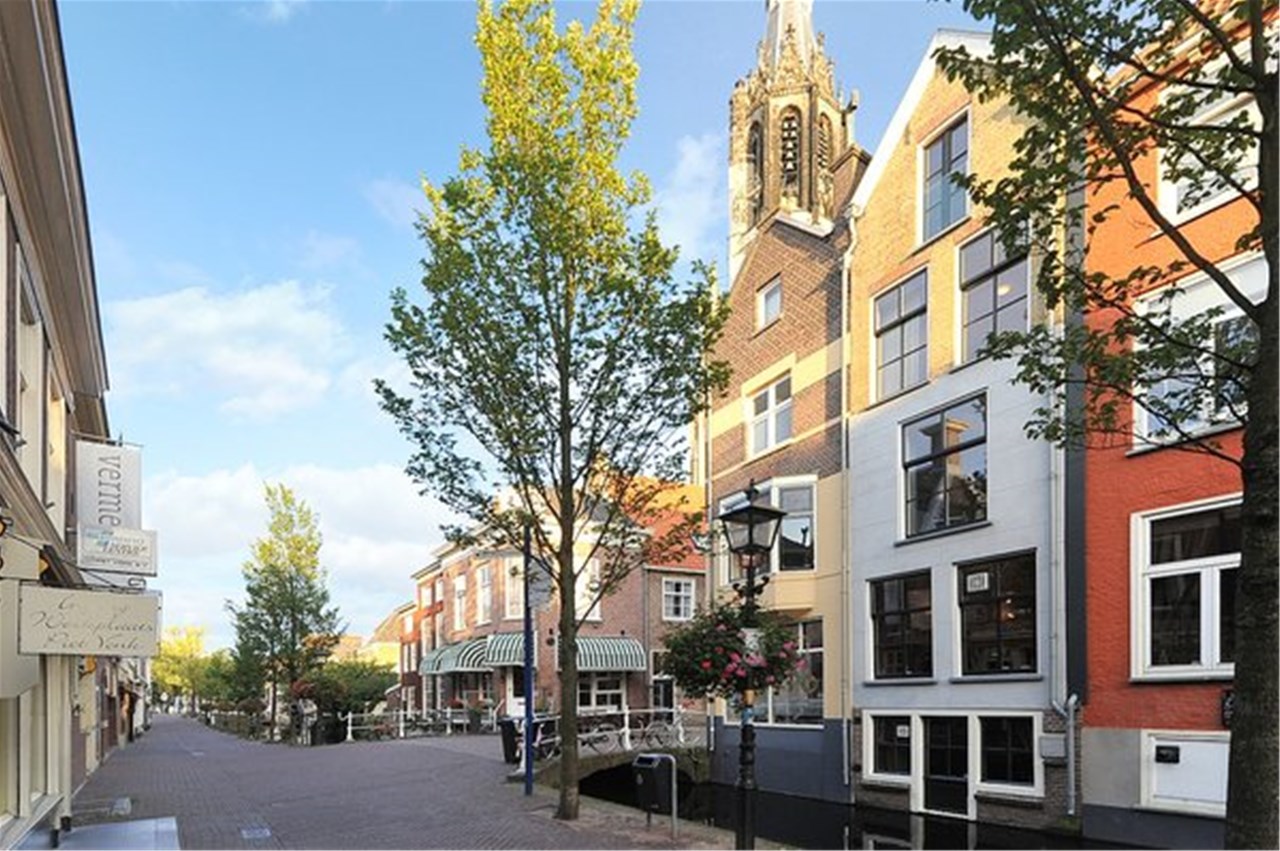 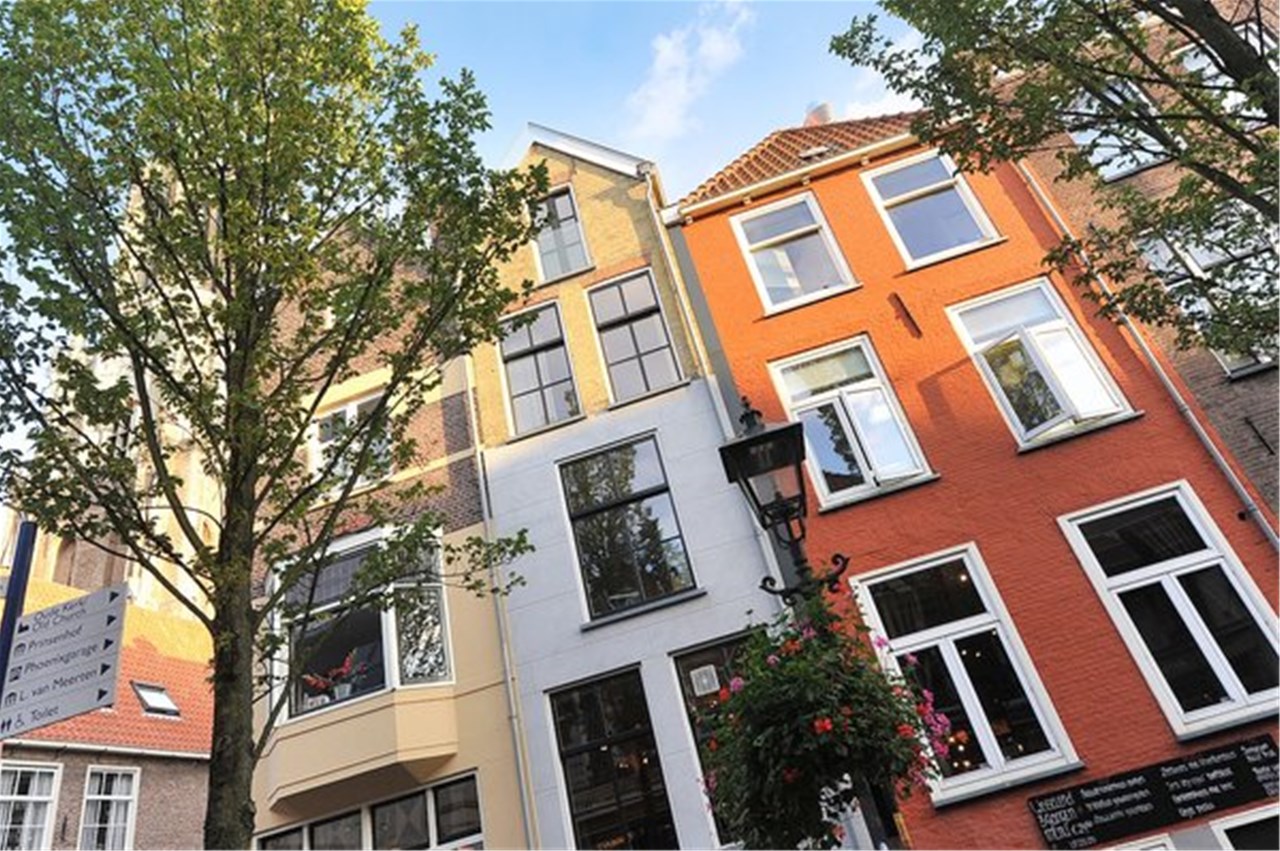 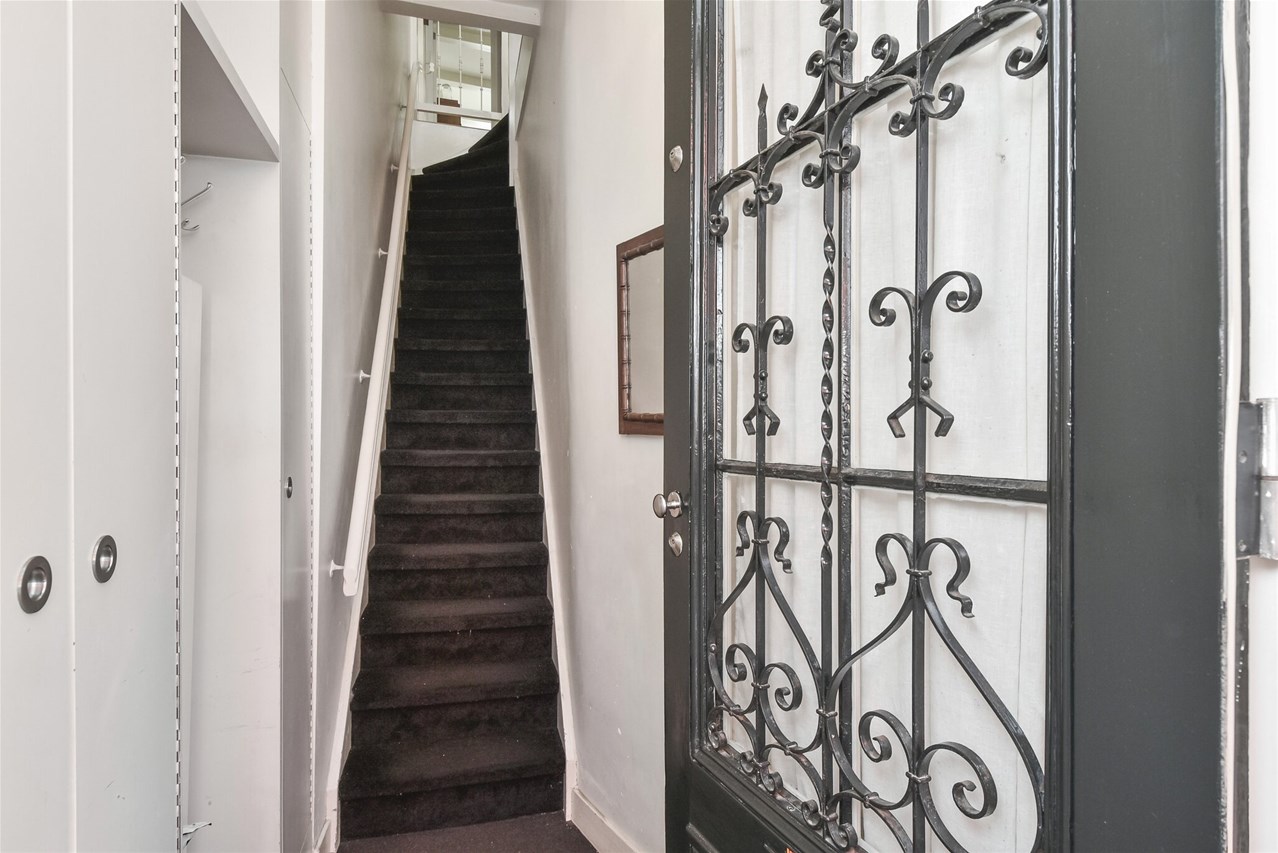 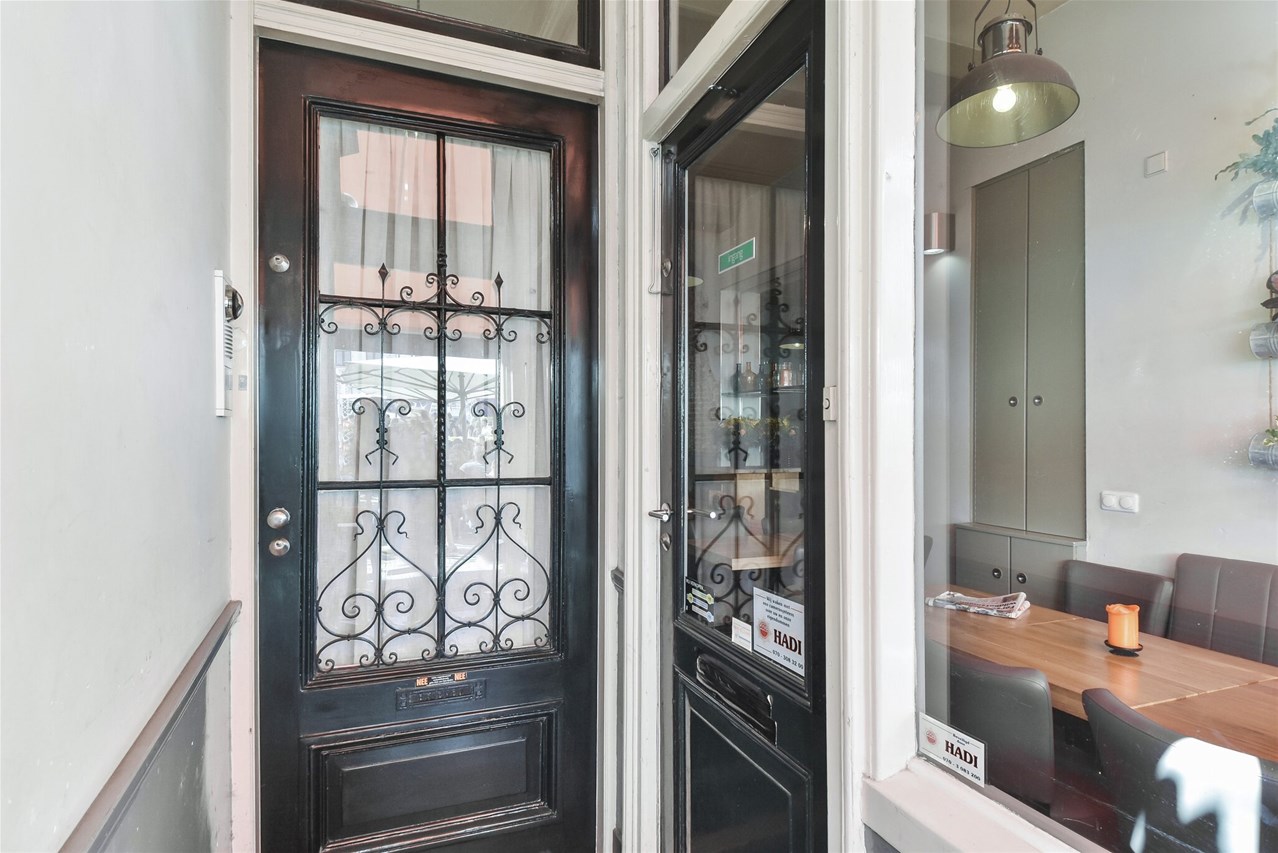 This well-maintained, unique three-layer apartment has a special upper floor equipped with a glass roof which can be opened partly. The apartment is located on the historic market square in Delft.

This municipal monument provides a splendid view on the Markt and both the Nieuwe Kerk (New Church) and the City Hall. The apartment has been fully renovated by an architect.

First floor:
Entrance into the living kitchen. This open kitchen (8.34x3.26m/27.36x10.69ft) is equipped with a stainless steel worktop and built-in appliances: a dishwasher, a fridge/freezer, a microwave, and a 6 burner stove with oven and hood. There is space for a large dining table at the front of the room, with a beautiful view over the market square. The room has great natural light because it’s south facing. Splitlevel design with access to a bathroom with shower, toilet, and sink. A spacious bedroom (4.77x3.03m/15.64x9.94ft) is located at the back of the house.

Second floor:
Spacious living room at the front of the house with, again, a view over the market square. Because of the loft on the third floor and the glass roof, this space has pleasant natural light. Splitlevel design with access to a bathroom equipped with a bathtub, shower, toilet, sink, and towel heater. A spacious bedroom with a walk-in closet, equipped with plumbing for a washing machine, is situated at the back of the house.

Third floor:
Open loft. This is a multifunctional space because of its shape and layout. A simple, but very conveniently placed kitchen is situated at the back of the house, including plumbing for the CV boiler (2002) and water heater. The roof is partly fitted with glass, which can be slid open.

Particulars:
- Functional living area 143m²/1539ft², volume 500m³/17657ft³;
- Municipal monument;
- The apartment is fully fitted with ‘Maple’ parquet flooring;
- The apartment was renovated in 2002 following a design by ‘Van Mourik & Vermeulen Architecten’;
- The glass roof provides a marvellous view over the market square with de Nieuwe Kerk and the City Hall!;
- The look of the apartment has been modernised, but the authentic details (joists, etc.) were kept in place.
Read full description

Delft has a historical inner city. In Dutch history, Delft is mainly known because William of Orange resided in the city from 1572, and was murdered there in 1584. Ever since, members of the Dutch royal family are usually buried in Delft. Delft’s nickname is the ‘City of Princes’. Delft and the royal family have been connected for hundreds of years. It is the city where the ‘Father of the Fatherland’ William of Orange took refuge in 1572, after his flight from Breda, and where he was murdered twelve years later.

During the Golden Age, the economy, art and science were booming in Delft. The city played an important part in the establishment of the VOC (Dutch East India Company) in 1602, and became one of the six cities where the VOC located one of its Chambers. The world-famous Delft Blue emerged in 17th-century Delft, and famous Dutch masters such as Johannes Vermeer, Pieter de Hooch and Carel Fabritius lived or worked here. Delft was also an important city for scientific research during the Golden Age. Several scientists from Delft, including Hugo de Groot, Reinier de Graaf and Antoni van Leeuwenhoek, are still internationally acclaimed for their work.