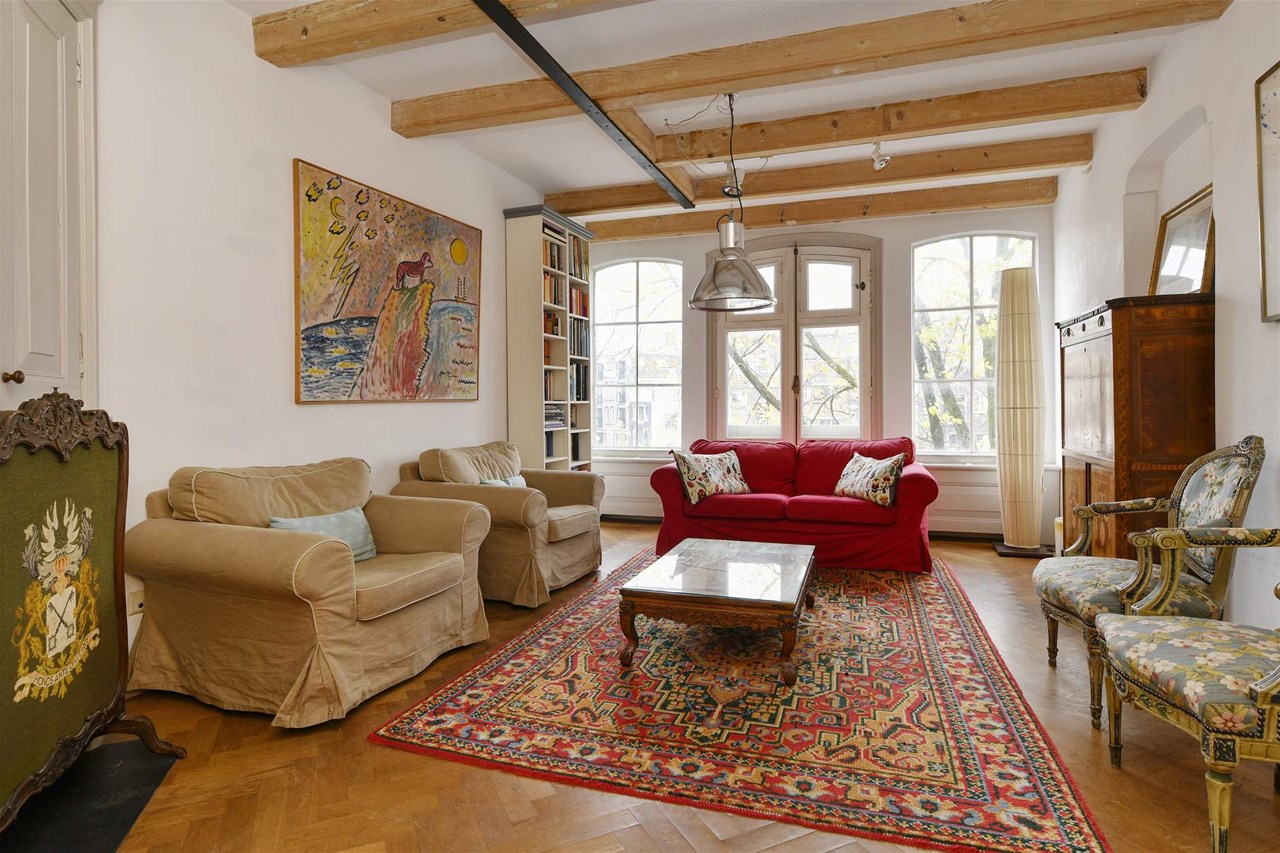 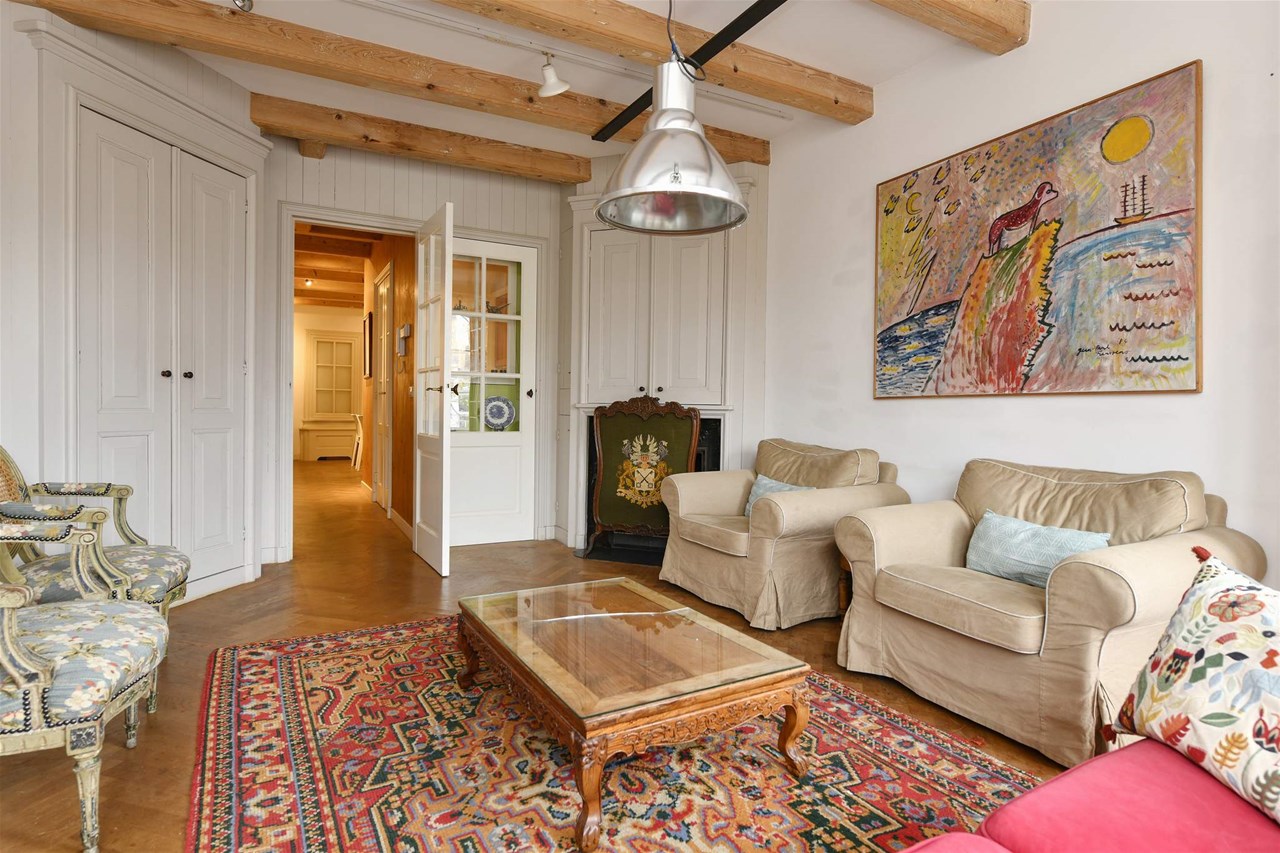 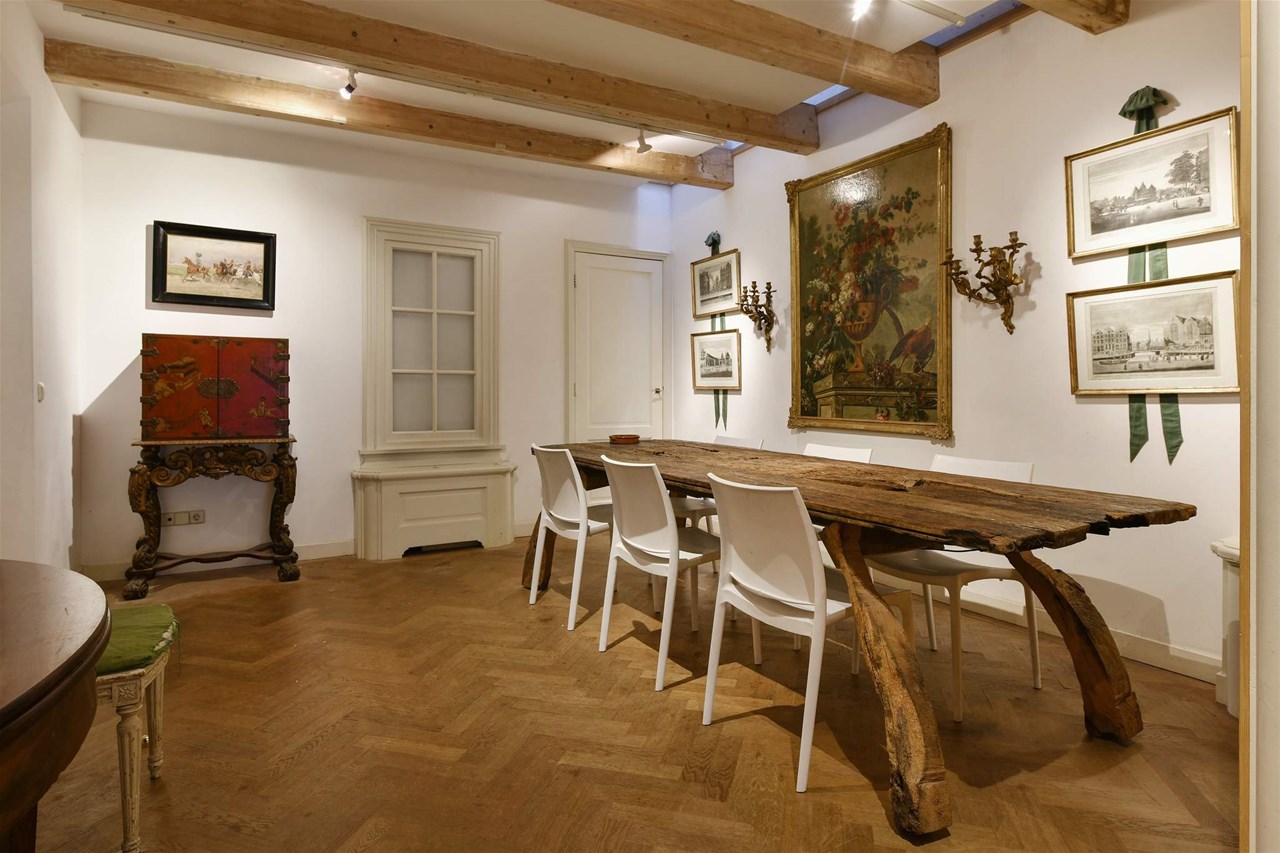 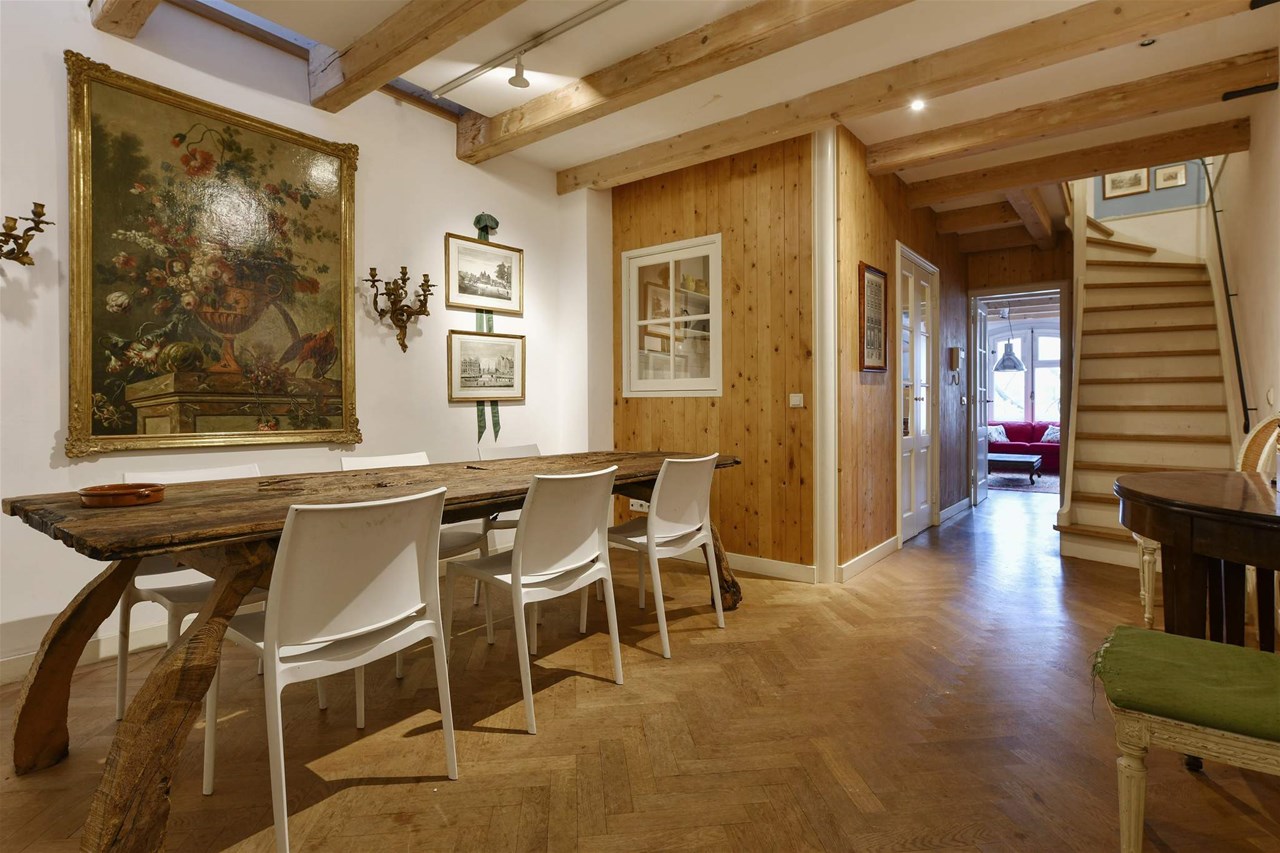 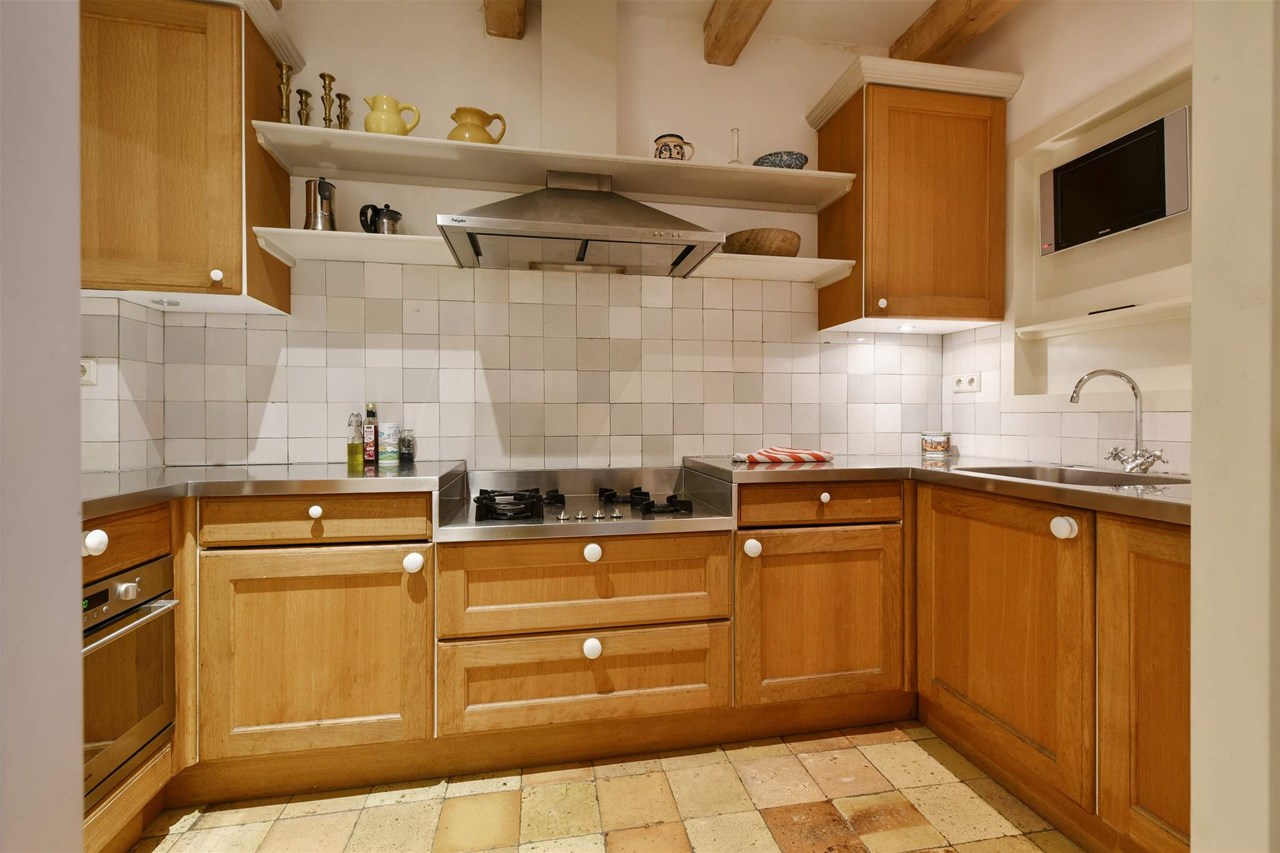 In a beautiful listed building in the old city center, we can offer this family upper house, located on the Singel and with a view of the Koepelkerk and the Haarlemmersluis. The upper house is located on the second, third, and fourth floor and includes a living room with a French balcony, dining room, separate kitchen, four bedrooms, and two bathrooms. Furthermore, the house has a wooden herringbone floor, beamed ceiling, and beautiful details. The stairwell has been recently renovated with an eye for detail. We would love to show you this piece of history during a viewing.

Layout:
Entrance on the ground floor through the stylish and spacious common hall with space behind it for storing bicycles. Hallway to the staircase, stairs to the second floor.

2nd floor
From the hall access to a separate bedroom with a mezzanine floor and sink. There are also two here
meter cupboards. From the hall entrance into the dining room with next to it the closed kitchen. The kitchen is set up in a U-shape and equipped with a steel worktop, wide 4-burner gas hob, oven, fridge/freezer, and dishwasher. At the front is the living room, with a fireplace, fitted wardrobes, and French doors to a French balcony with a view of the canal and the Koepelkerk. Through the dining room, there is still access to a toilet with hand basin and storage space in the stair cupboard. Stairs to the third floor.

3rd floor
Landing, at the front a spacious bedroom with carpet and French doors to a French balcony. There are two bathrooms in the middle of the floor. The first is equipped with a bath, washbasin with a marble top and heated mirror, towel radiator, toilet, and an openable window. The 2nd bathroom has a shower, also a washbasin with a marble top and heated mirror, a towel radiator, a toilet, washing machine connection, and a skylight. Both bathrooms are tiled with original "whites". There are two bedrooms next to the bathrooms. One of them has a staircase to a mezzanine floor with a bed. This room could also serve as a dressing room. The other bedroom has a difference in level and a staircase to a mezzanine floor with sleeping facilities. This room offers enough space for a double bed. Both rooms have a Velux skylight. From the landing a staircase - with beautiful carvings - to the 4th floor.

Roof terrace
The communal roof terrace is accessible from the 2nd floor.

Surroundings:
The apartment is located on the beautiful Singel, on the canal belt of Amsterdam. Situated between the old city center and the Jordaan, with cafes, restaurants and terraces and a diverse range of shops. The Haarlemmerdijk, the Noordermarkt, and the Westermarkt and the Kalverstraat and Nieuwendijk are also within walking distance.

The Central Station can be reached on foot within 8 minutes.

History:
Historical research shows that in anticipation of the first explanation, the buildings on the Singel 70-72 were already built, around 1585 when the first part of the west side of the Singel was also built. This part, at the time on the harbor, was the first to be built on and originally they were houses for the well-to-do bourgeoisie. A number of owners of plantations and companies that were originally located here, at the time still outside the Singel (defensive or vesting canal), also bought their own land back from the municipality of Amsterdam. Drawings from that time show two buildings with gable roofs, of unequal size. Around 1700 there are drawings that the two buildings were merged into a very large mansion with the entrance in the middle and two large windows on either side. The roof is then extended. It is not clear when exactly the annex was built and then added. Around 1850, the right-hand building, originally the smaller building of these sister buildings, was converted into a warehouse, whereby a mezzanine floor was built in and the beams were adapted with an entrance on the ground floor. The first floor and basement will then disappear at number 70.

In the 20th century, the buildings had many functions: office, housing, storage of hand carts, and warehouse for a book club. In 1993 the buildings were divided into apartments, then still in their entirety (since 1957) with an office destination, and quite soon afterward most apartment rights were converted into houses, except for the first floor and the basement at number 72.

Accessibility:
The location is easily accessible from the Ring A10 via exits S103. There are various public transport options from Nieuwezijds Kolk. And the Central Station is an eight-minute walk away.

Grachtengordel West lies alongside four main canals (Singel, Herengracht, Keizersgracht and Prinsengracht) and is marked as UNESCO world cultural heritage. The area defines itself by its broad canals and big residences. The Grachtengordel has many historical sights, including the Anne Frank house, the Grachtenhuis, The Bible museum and House Marseille. Inside the area lies the well know nine streets (9 straatjes) one of the most important shopping area’s of Amsterdam. The primary functions of this area of Amsterdam are living and working.