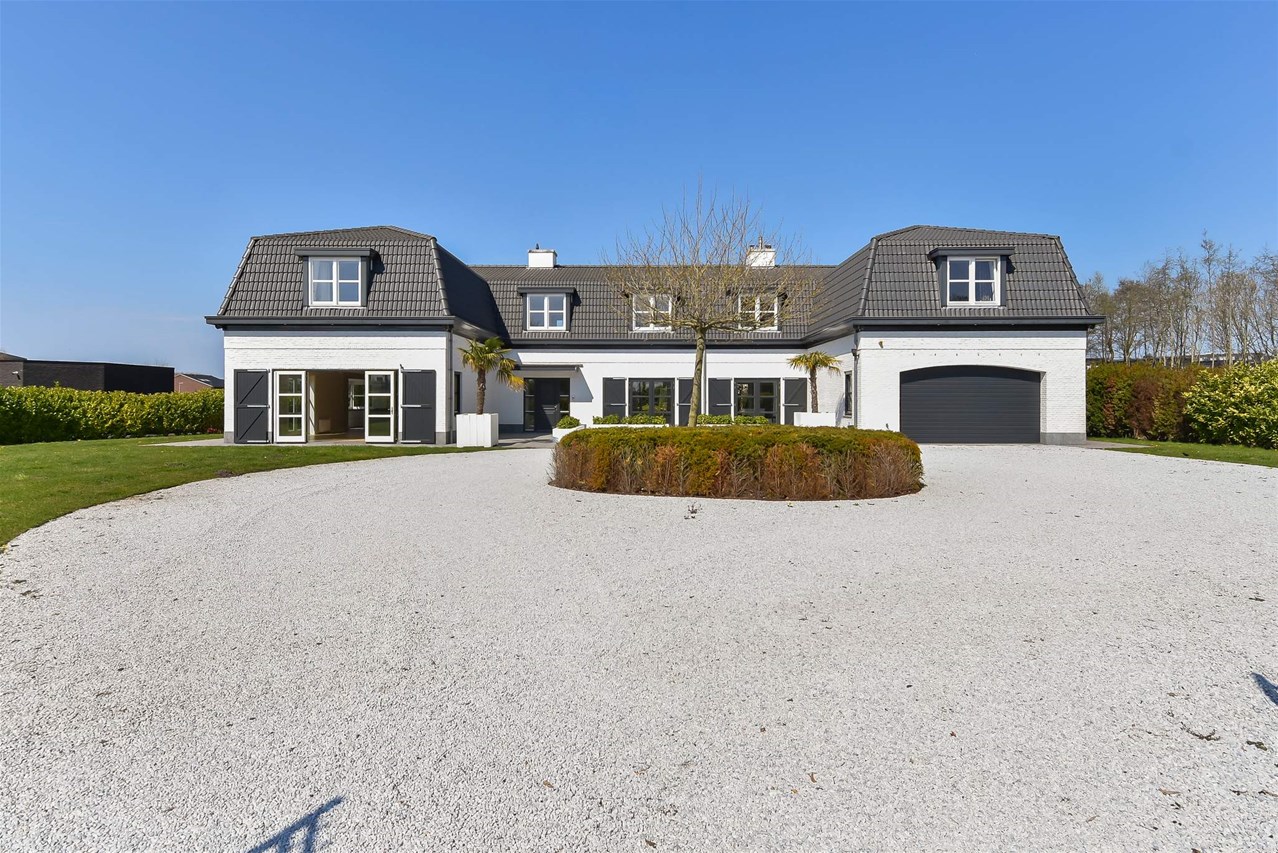 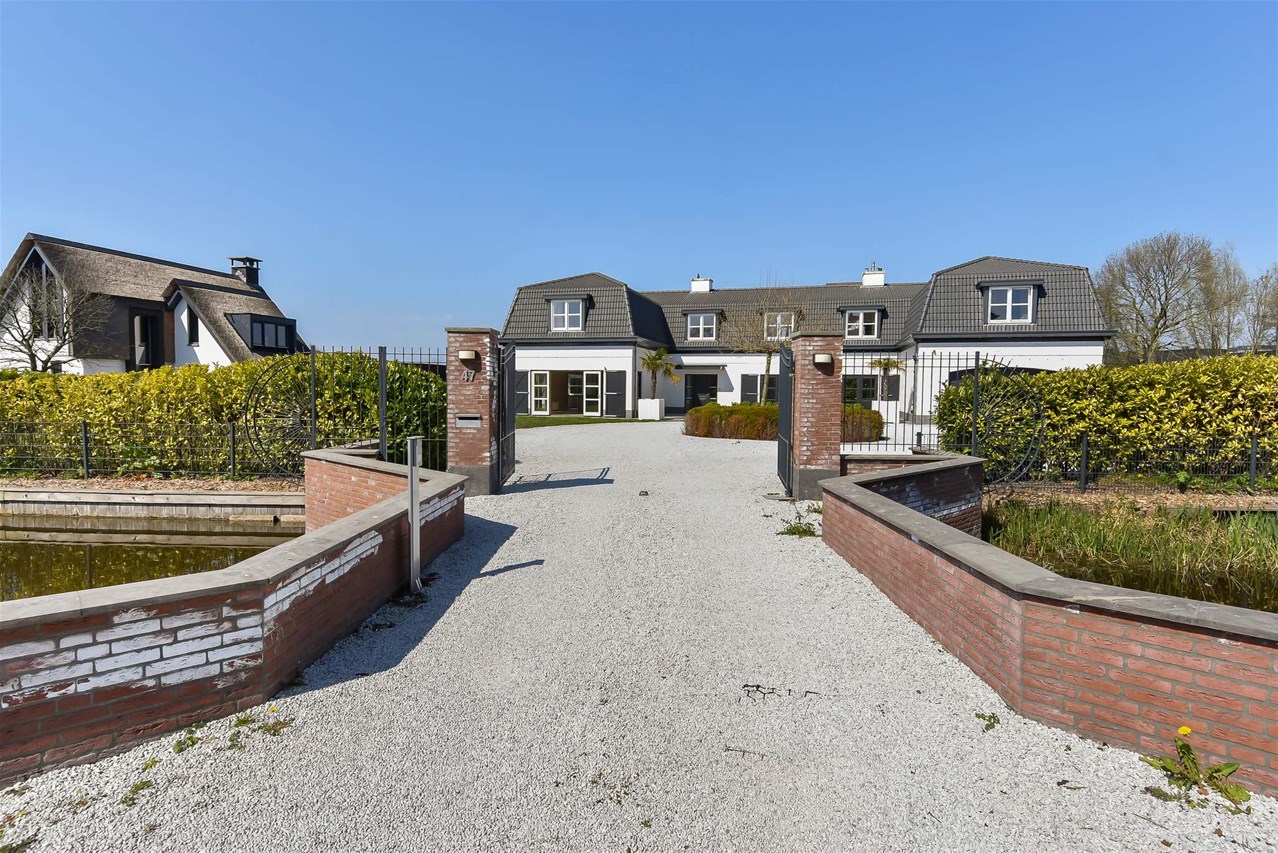 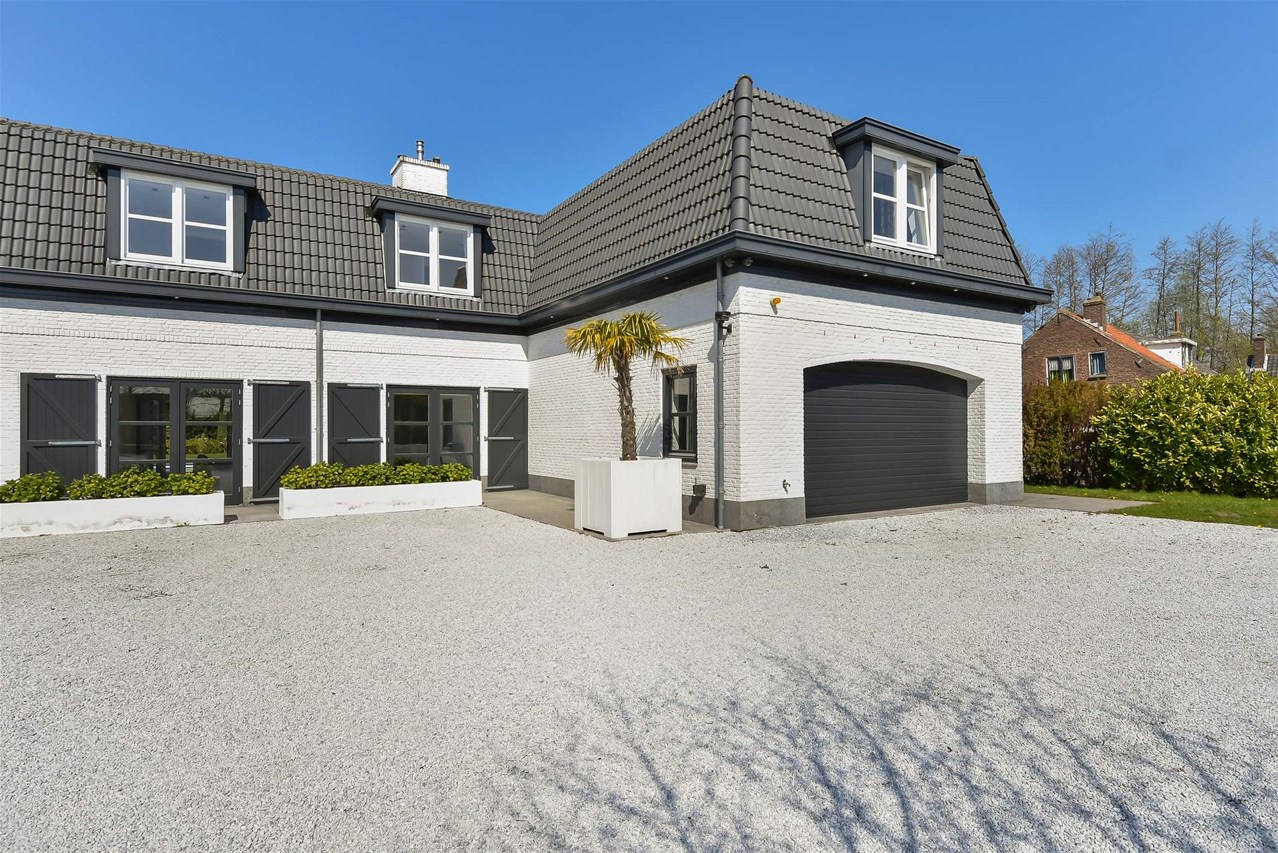 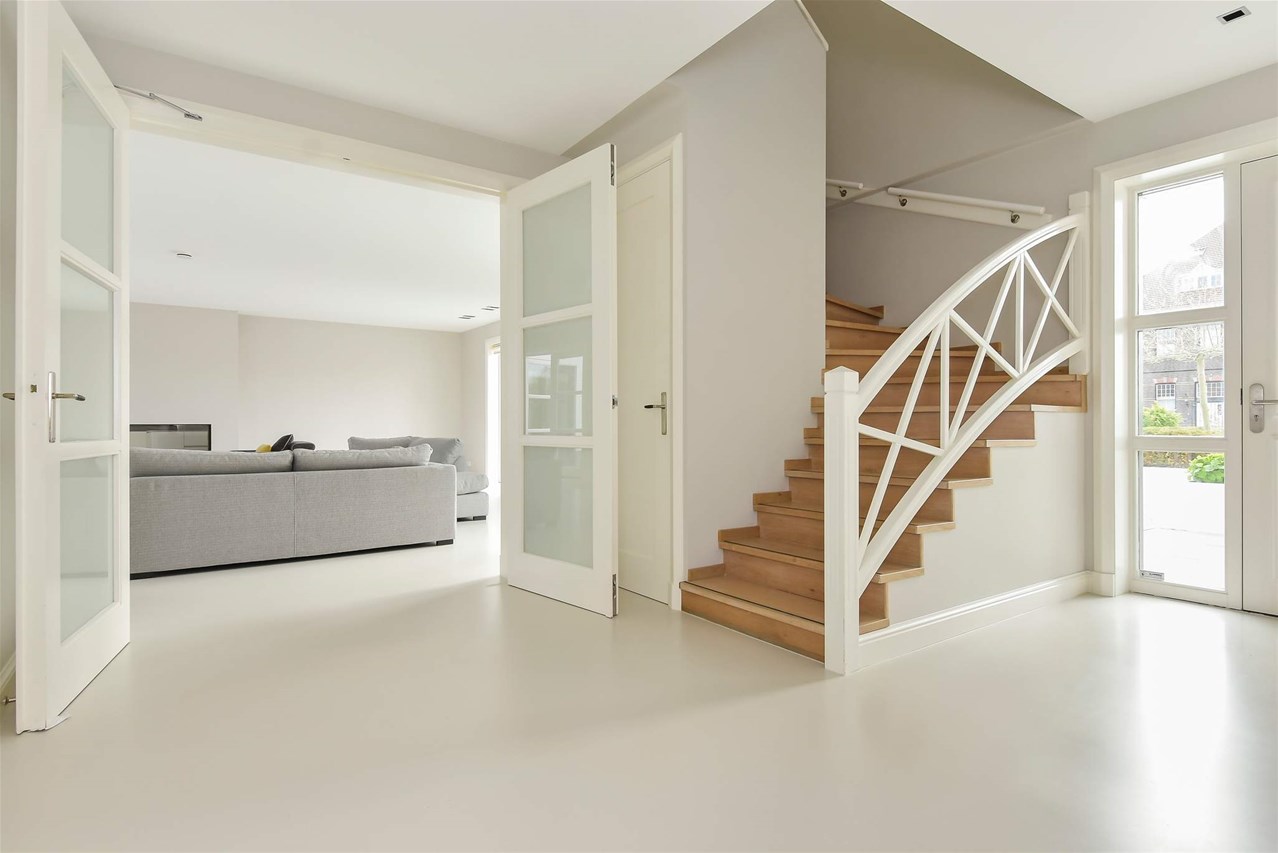 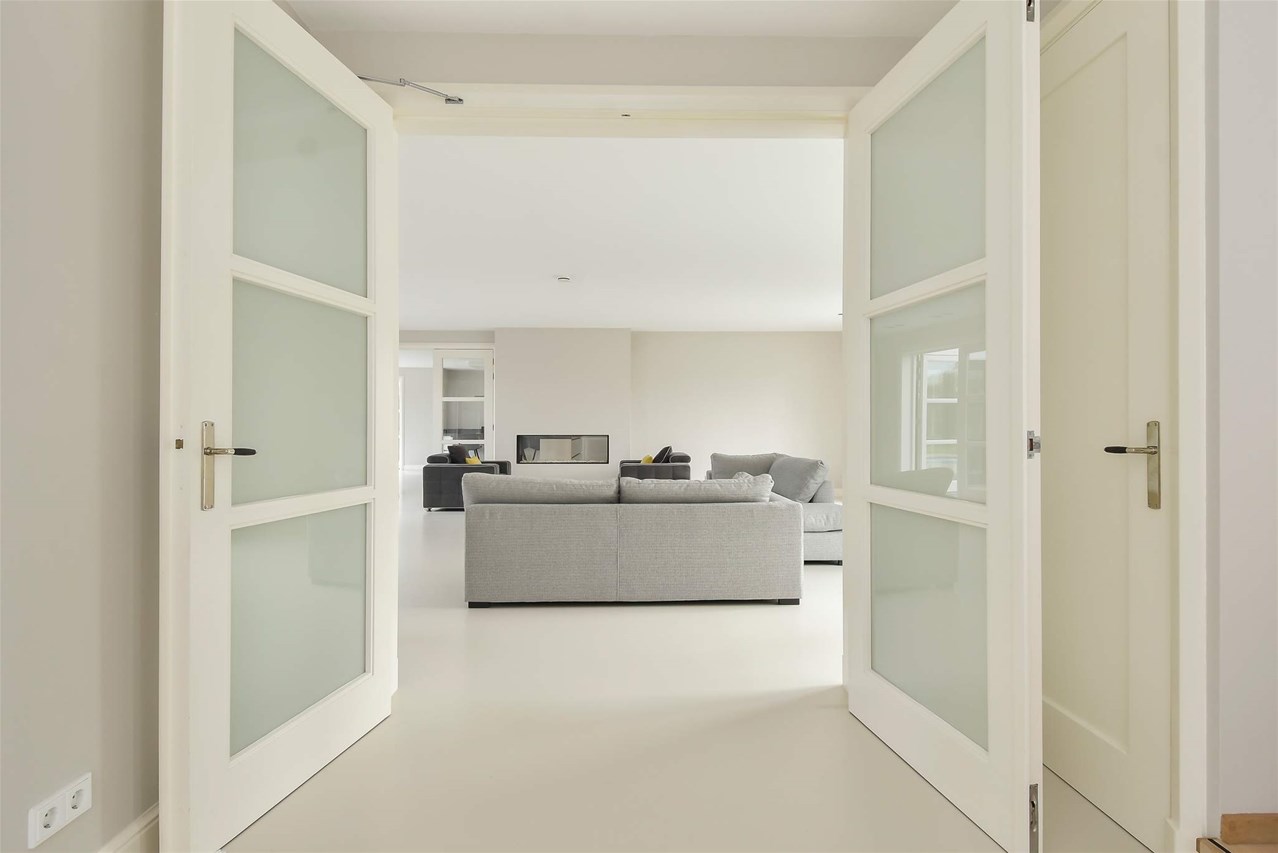 THE RIGHT WING OF THIS EXCEPTIONAL VILLA, WHICH HAS BEEN NAMED “THE APPLE TREE” AND CAN BE FOUND AT VEENWEG 47-A NOOTDORP, HAS A LIVING SPACE OF SOME 464 M2 AND A TOTAL INDOOR VOLUME OF APPROX. 2217 M3.

The villa was built in 2009, is set on a 2200 m2 (approx.) plot of freehold land (still has to be officially measured by the Land Registry), and the very high quality of the finish is immediately obvious. The location is unique: a prominent place on the historic Veenweg, across from the beautiful Bartholomeaus Church, yet still centrally located. Within 2 minutes you are on the main highways – the A4, A12 and A13 – and public transport (the train station and the Randstadrail tram). Within 10 minutes by car you can be in the centre of The Hague, and it is walking distance from shops, restaurants, schools and the British School in Leidschenveen.
The lay-out of the villa is as follows:
The drive up to the villa takes you over a bridge, through a secured gate, and then there is parking space for several cars in the front garden.
Spacious entrance hall with a meter cupboard and a modern cloakroom. Access to the 63 m2 (approx.) living room which has French doors out to both the front and back gardens. From the living room there is a games room / office of some 19 m2. The big living kitchen is approx. 57 m2 and has lots of fittings and appliances as well as a Borreti Majestic cooker including a wide, double cooker hood. To the rear of the kitchen there is a hallway with access to the 133 m2 (approx.) cellar which has a standing height of approx. 2.60 m, as well as access to the 45 m2 (approx.) storage room / garage to the front of the cellar. From this hallway there is also a staircase up to the first floor.
From the main entrance on the ground floor there is a further staircase up to the first floor. This part of the property has 5 bedrooms (two of which have en-suite bathrooms), a bathroom with a bath and walk-in shower, a separate laundry room, a walk-in closet, two cloakrooms and a further family bathroom with a wide walk-in shower and a beautiful roll-top bath.
Very private garden which catches the sun all day and has an outdoor swimming pool.

THIS UNIQUE VILLA NEEDS TO BE SEEN IN ORDER TO GET A PROPER FEEL FOR JUST HOW LOVELY IT REALLY IS!
Read full description

Nootdorp is a village in the municipality Pijnacker-Nootdorp. Nootdorp is very close to The Hague, Pijnacker and Delft. Just like Pijnacker, Nootdorp has a long history, which can be seen from its old buildings, the church in the village centre and the mill. The modern shopping centre Parade, in the middle of Nootdorp, has been built with the past in mind. The centre has been constructed on the old racetrack, and is shaped like a horseshoe. Nootdorp also boasts some beautiful sports centres and a library. There are plenty of education facilities as well, including kindergartens, day-care centres, primary schools and a secondary school. There is greenery and water in abundance, too. The Biesland forest, the Balij forest and the Dobbe lake are just around the corner.