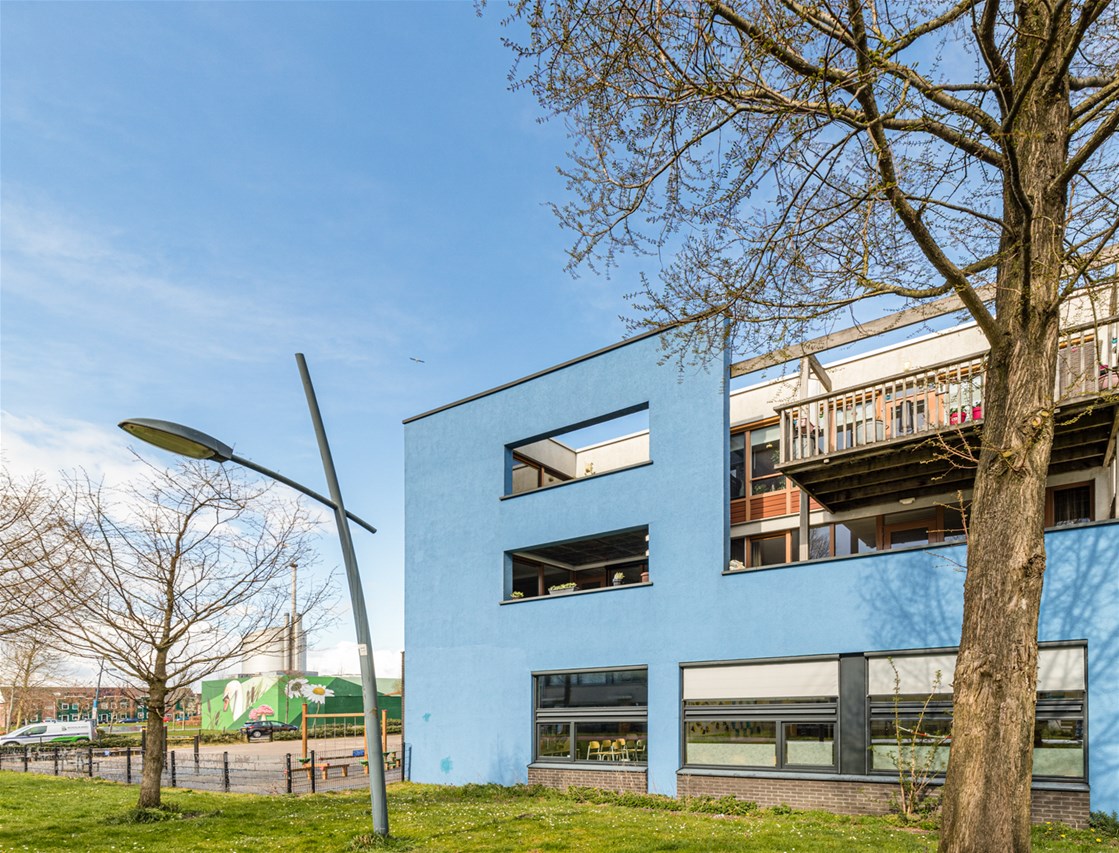 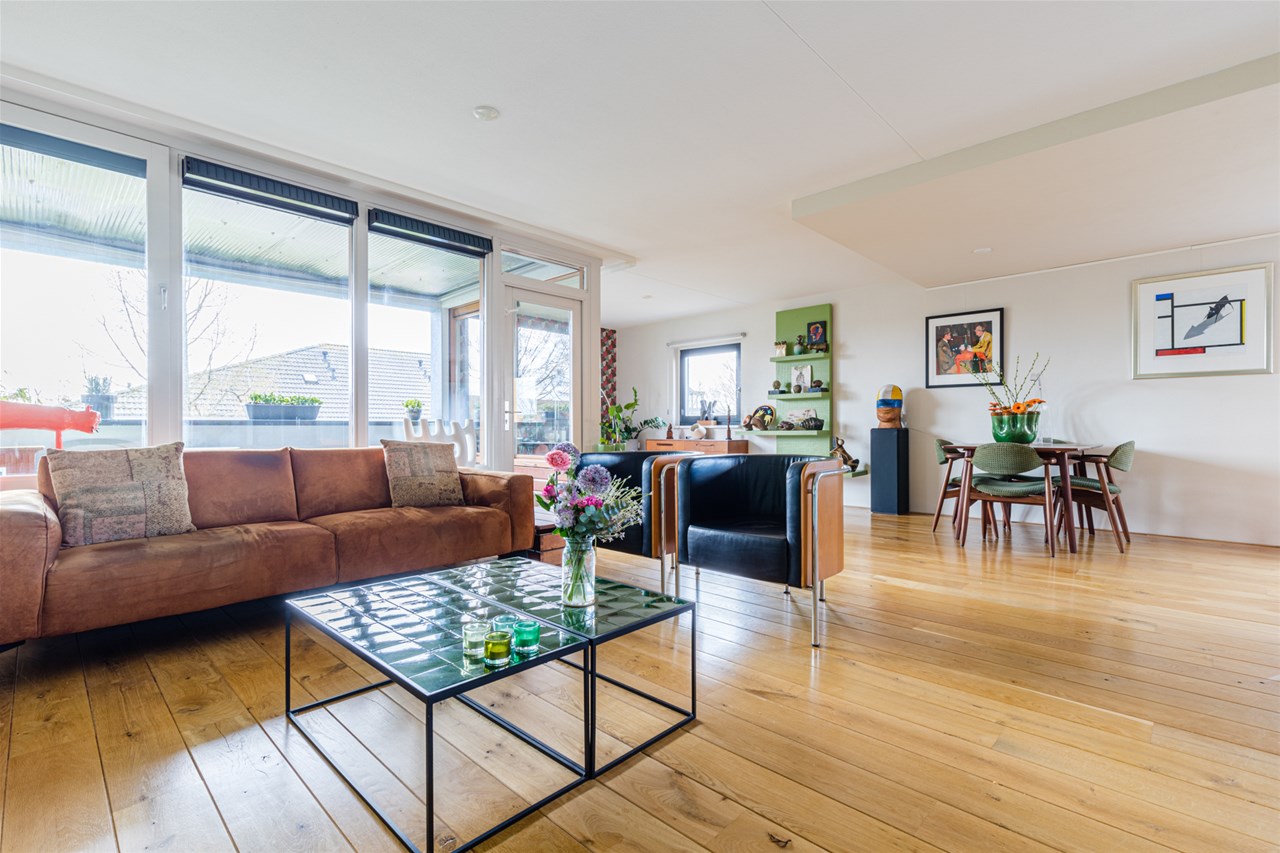 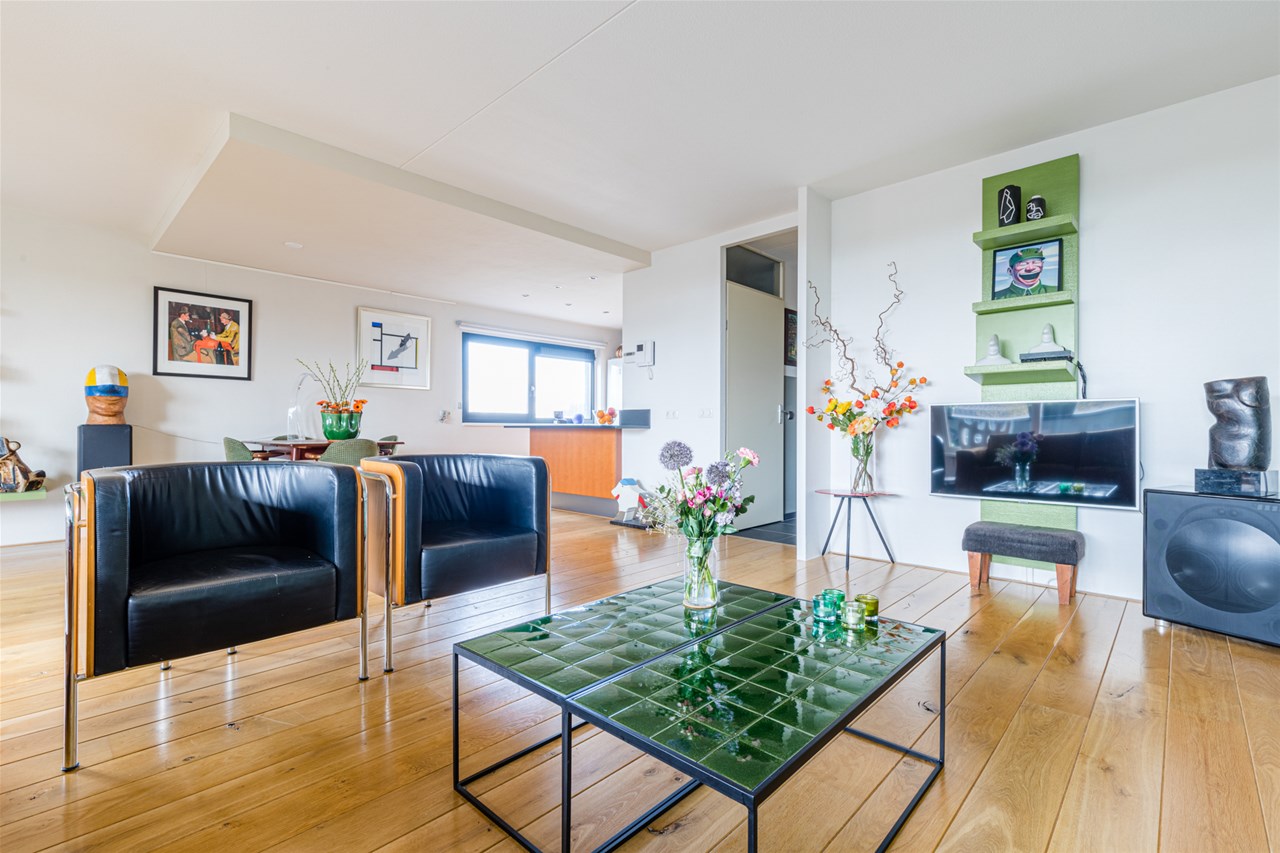 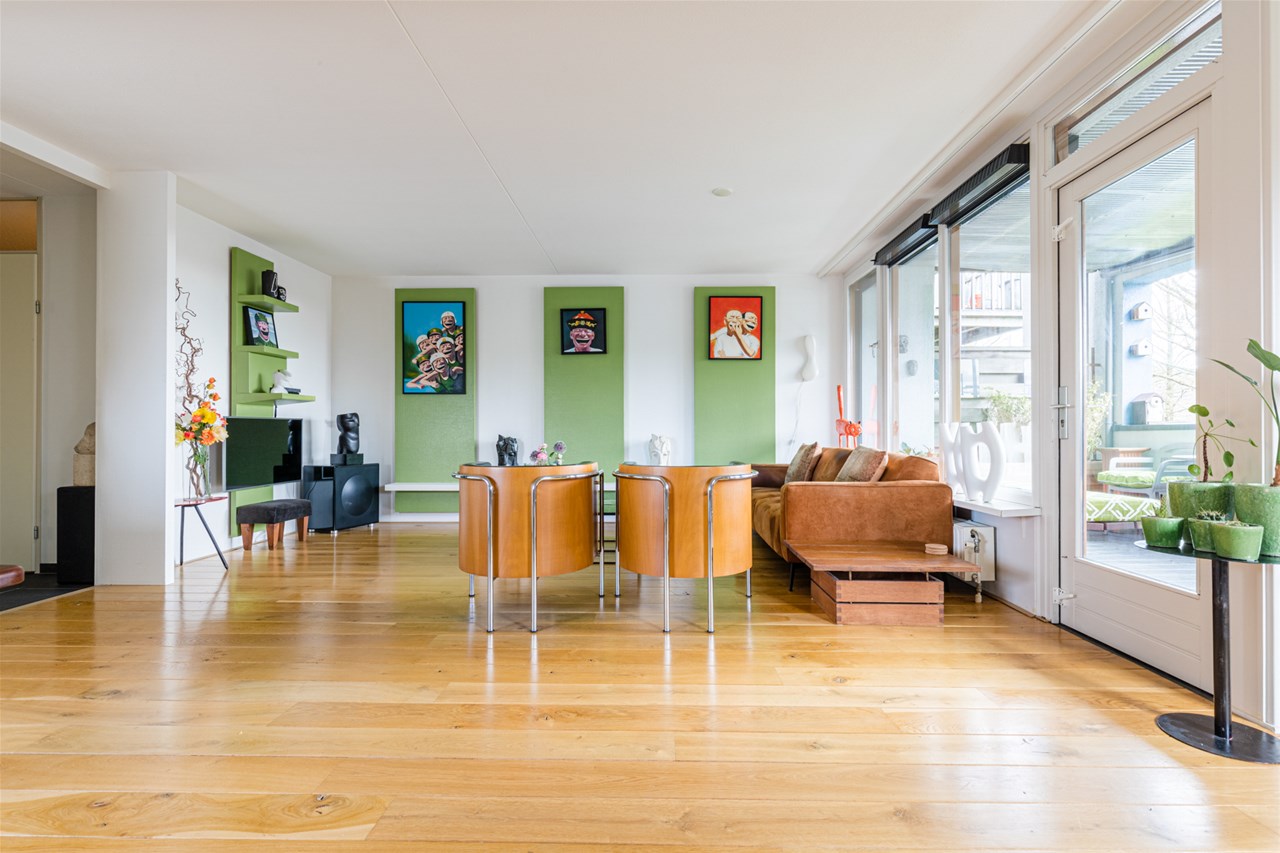 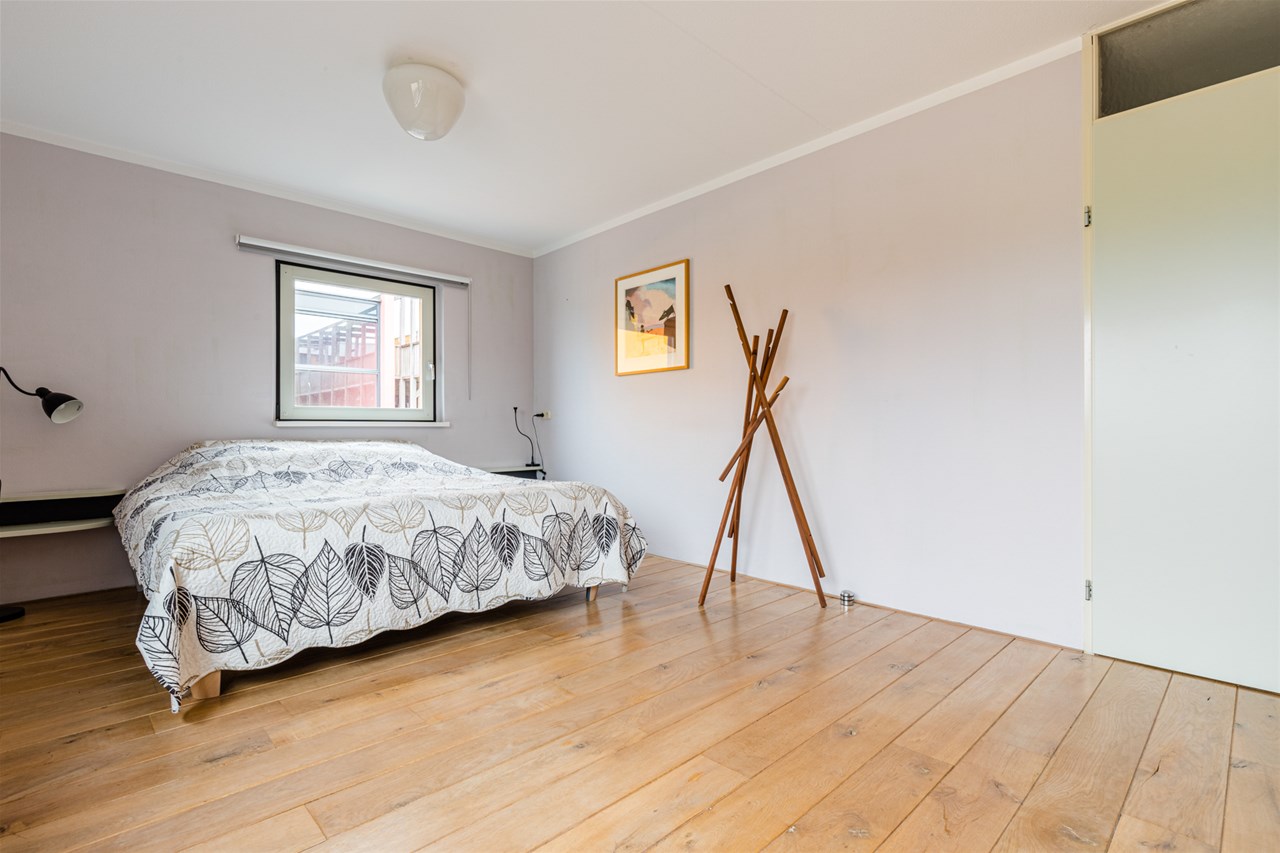 This house will make you happy! Lovely, well maintained corner apartment in Mexican atmosphere, colourful, spacious (104 m2) and inspiring. The apartment complex is inspired by a Mexican square and immediately gives you a sunny feeling. The 3-room apartment with spacious living room with open kitchen, large master bedroom with walk-in closet and bedroom/study is nicely finished and has a generous, roofed sun terrace on the southwest. Here you can enjoy the first sunrays in early spring with a drink!

About the neighbourhood:
This beautiful corner apartment (2001) on the first floor is situated in a lively location (above a school) in the child-friendly district Waterrijk. This means that you do not have to go far from home for childcare and primary school. Secondary education is easily reached by bike. The neighbourhood is intersected with safe walking and cycling paths. The Kaaikhof shopping centre is five minutes away by bike. Here you will find several supermarkets, a wide range of shops, some restaurants and various medical facilities. The Assendelft sports clubs are also easily accessible by bike, and speaking of cycling: the beautiful meadows and ribbon villages around Assendelft are ideal for beautiful cycling or walking tours.
The bus stop is within walking distance and to the railway station Krommenie-Assendelft, with good connections to a.o. Zaandam and Amsterdam, you cycle in five minutes. By car, both the A9 motorway towards Alkmaar, the A7 towards Purmerend and Hoorn and the A8 with subsequent A10 to Zaandam and Amsterdam are easily accessible.

Layout of the house:

Ground floor:
Closed entrance with doorbells and intercom. Colourful shared hallway with staircase and lift to the floors.

Apartment:
By stairs or lift you reach the beautiful wooden gallery and the front door of the apartment. Entrance (long corridor) with directly on your right hand side the spacious, bright master bedroom with large walk-in closet. Directly on your left is the second bedroom which can also function as an office. This room also has a fixed closet. Further down the hallway are the meter closet, a storage closet with the connections for washer and dryer and the spacious bathroom with bathtub, shower, vanity unit with wide sink with two taps and mirror. Opposite the bathroom is the separate floating toilet with hand basin and at the end of the hallway you will find the entrance to the living room with open kitchen.
The spacious, L-shaped, bright living room has a wide glass front at the rear with a door to the terrace. Because of the corner location, daylight also comes in through a side window. At the back of the living room, the U-shaped kitchen (Siematic) is located. The kitchen has cherry wood fronts and the following appliances are available: a dishwasher, an oven, an induction cooker and a separate fridge / freezer. The kitchen also has a wide window. The living room has enough room for a large dining table and a spacious seating area. On the floor of the living room and bedrooms is parquet and in the hallway and in the bathroom are grey tiles.

Outside space:
The house has a covered terrace on the southwest, where you can create a lovely lounge area and enjoy the sun in early spring.
On the ground floor you have access to a (bicycle) storage.

Parking:
There is ample parking space around the house.

Delft has a historical inner city. In Dutch history, Delft is mainly known because William of Orange resided in the city from 1572, and was murdered there in 1584. Ever since, members of the Dutch royal family are usually buried in Delft. Delft’s nickname is the ‘City of Princes’. Delft and the royal family have been connected for hundreds of years. It is the city where the ‘Father of the Fatherland’ William of Orange took refuge in 1572, after his flight from Breda, and where he was murdered twelve years later.

During the Golden Age, the economy, art and science were booming in Delft. The city played an important part in the establishment of the VOC (Dutch East India Company) in 1602, and became one of the six cities where the VOC located one of its Chambers. The world-famous Delft Blue emerged in 17th-century Delft, and famous Dutch masters such as Johannes Vermeer, Pieter de Hooch and Carel Fabritius lived or worked here. Delft was also an important city for scientific research during the Golden Age. Several scientists from Delft, including Hugo de Groot, Reinier de Graaf and Antoni van Leeuwenhoek, are still internationally acclaimed for their work.